Home EVERYTHING HISTORY WITH KWEKU DARKO ANKRAH History of Akwamu 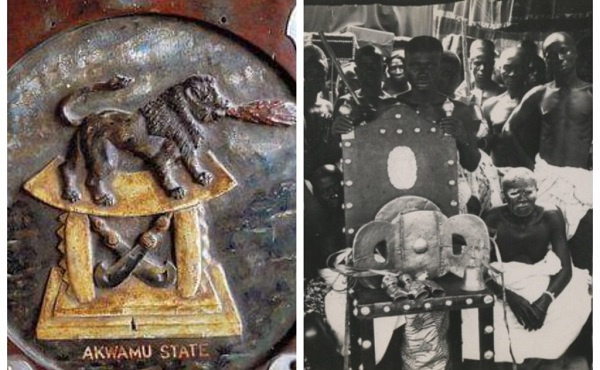 In the pre-colonial and colonial history of Ghana, Akwamu emerged as one of the most powerful kingdoms with strong warriors and astute traders. They were able to conquer territories from their hinterland position at Nyanaoase to Agona, Ga land, Adangme, Akuapem Hills, some parts of Akyem and Kwahu. They even waged wars as far as the Eweland where their defeat of Ho brought them the name Asɔglimeawo. However, they became famous globally when some of their enslaved people took a central stage in the slavery revolt on 23 November 1733 in the Americas.

The enslaved Akwamu waged one of the vicious revolts against the slave owners and managers of St. John plantations in the United States Virgin Island are which part of the Danish West Indies was then. This comes against the backdrop of earlier historically clever and militaristic audacity with which Akwamu warlord, Asameni deployed to seize the Osu Christiansborg Castle from the Danes and reign on it for a year.

The Aduana Akwamu people have a consanguineous relationship with the people of Wassa Amanfi in the Western North and the Dormaa in the Bono Regions of Ghana and the Anyi/Agni people of Ivory Coast. They were all part of the Aduana-Atwea-Abrade group forming the Twifo group or Akwamu before circumstances such as internal civil strife and dynastic conflicts led to their leaving the main Akamu group.

The people and their location

The Akwamu are ancient Aduana and agroforestry Akan Twi-speaking people of the larger Kwa ethnolinguistic people of Ghana and West Africa. They are found on the Akwamu Hills Community forest, a gazetted forest located between Atimpoku and Akwamufie on the eastern side of Volta River in the Asuogyaman District of the Eastern Region. The hill on which the forest is located rises to the height of about 400 metres above sea level and forms the southern limit of the Akwapim-Togo Range at the interface with the Akwapim Plateau within the Volta Gorge. The hill provides a rare panoramic view of the lower regions of the Volta River system. The Akwamu towns include Atimpoku, Senchi, Adumesa, Gyakiti, Akwamufie, Senchi, and many others.

Two theories underpin the meaning of the name Akwamu. Historian Ludvig Ferdinand Rømer contends that Akwamu were notorious bandits who ambushed people on the way and captured them as slaves or rob them of their resources. For this reason, the Europeans and other African states described them as always working on a ɛkwan ‘path’, mu ‘inside’ and fo ‘people’, hence they became ɛkwanmufo ‘the path people.’ Ɛkwanmufo was corrupted to Akwamufo. Rømer’s claim is rejected by the Akwamu oral accounts that suggest that they earned the name Akwamu or Akwamufo from Mfantse ‘Fante/Fanti’ people. They contend that they were originally Aduana Twifo but got the name Akwamufo when they were moving from their settlement at Twifo Hemang. When they passed through Mfantse territories, they commented Nyimpa na wɔdɔɔso dɛm yi no, ɛhwɛ wɔn dɛmaa na wo kɔn yɛ wo yaw “these people are too many to the extent that when one watches them he or she feels pain in the neck.” It was this expression which was shortened to Akwamu ‘group of multitudinous people who makes one’s neck hurt when you watch them.’

Akwamu oral tradition asserts that their ancestors were Aduana-Abrade-Atwea clan members who originally lived at Kumbu in Kong in Bonoland which is now part of the Northern Ivory Coast. They emigrated from Kong in search of new homes after their subjugation by the Zaberima. Thus, from Bonoland, the Aduana people took a southward trajectory, crossed Rivers Offin and Pra to settle at Twifo Hemang in the present-day Central Region. Whilst here and attempting to consolidate their power, another Akan group, Twifo also migrated from the Bonoland to settle in the Pra area which was the land of the aboriginal Etsii people.

In Hemang and under their first King, Nana Agyen Kokobo, the Akwamu were called Twifo, just like the others in the area who traded in the coastal towns of Shama, Elmina, Komenda and Cape Coast. Oral tradition confirms that the northern Twifo group gained upper hand over both the aboriginal Etsii and the southern Aduana Akwamu in Hemang. The Denkyira Kingdom also made its rapid rise and started to exert its supremacy over others in the area. However, the dynastic dispute compelled a group of malcontent Aduana group led by one of the rival candidates later known as Otumfuo ‘Blacksmith’ Asare to move on to find a new place to settle. Asare carved a prɛmpɛ ‘we do not want you’ drum and sounded it to King Owusu Bore, thus; Merensom obi a ɔte se wo da! da! da! ‘I will not serve someone like you ever, never! never!’ As they were moving out of Hemang, some of their people took westwards trajectory to the Ivory Coast and became the Anyin or Agni people in that country, whilst the Asare-led group took southward trajectory to settle briefly at the Mfantse Abora town of Abakrampa.

It is said that it was whilst these Twifo Aduana groups were moving from their settlement at Twifo Hemang that the Mfantse people who saw their large retinue exclaimed, Nyimpa na wɔdɔɔso dɛm yi, ɛhwɛ hɔn dɛmaa nna wokɔn yɛ wo yaw “these people are too many to the extent that when one watches them he or she feels pain in the neck.” From Abakrampa, in the Akwamu moved on to Birem Valley in West Abuakwa and built a town which they named Asare- Mankese ‘Asare’s Large State’, now Asamankese, after their leader Otomfuo Asare. At the lowlands of Asamankese, the elders saw the Nyanao/Nyanaw Hill and realised that people used its environs, like Adoagyiri and Nsawam, to trade in Accra. Thus, as part of the Akwamuhene’s intention to control trade and built a powerful warrior nation, he moved his people to settle on the Nyanaw Hill to found two towns, Nyanawase ‘Beneath the Nyanaw Hill’ and Nyanawso/Nyanaoso ‘Top of the Nyanao Hill’. From their base in these two settlements, the Akwamu gradually built their kingdom to emerge as one of the most powerful in the seventeenth and eighteenth centuries. Asamankese maintained its role as an important town whose stool was next in rank to that of the King of Akwamu.

Although the Akwamu were farmers and traders, they thrived in warfare which became a secondary occupation to the chiefs and people for it gave them assess to land, people, and money. In 1680, Akwamu defeated Accra and moved on to extend their suzerainty over the Guan and Kyerepong in the Akuapem Hills to the east. In other to control and monopolise the gold and slave resources in the area, the Akwamu King extended his supremacy over the Krepis. The Akwamu resounding defeat of the Ho Ewes ‘Krepis’ earned the Ho people the traditional name Asɔglimeawo for before they surrounded their Ho town to the Akwamu, every man sharpened pieces of wood, inserted them to the walls of their houses and spread thorns all over their camp-sites.

Under King Ansa Sasraku, who reigned from 1660 to 1689, Akwamu’s expansionist drive reached its apogee. He subdued the Ga of Accra and Dangmes, some parts of Akyem and Agona. Accra was under Akwamu’s power until 1730. This power enabled Ansa Sasraku to establish friendly and prosperous trading relations with European merchants in Accra, Winneba and Ada. The Akwamu warriors became so daring that one warlord and trader, Nana Asemani deployed a militaristic stratagem to seize the Osu Christiansborg Castle from the Danes and occupied the castle for a year and a half, until negotiations resulted in the Akwamu returning the castle and captives to the Danish, in exchange for 1600 pieces of silver.

King Ado who succeeded Ansa Srasraku maintained the power of Akwamu, but it was the warrior-king Akonnor who succeeded Ado from 1702 to 1725 who promoted their trade with the Europeans on the coast and expanded the Kingdom further by annexing Kpandu and part of the Afram plains in Kwahu. Akono cultivated friendly relations with the Anlo on the coast, an alliance that brought to them the benefits of trade with the Danes in Keta.  Slave trading became a serious trade for the Akwamu so much that they laid siege on the way to capture innocent travellers or ambush traders on their way to or from a market centre. For the Danes and other ethnic groups that suffered Akwamu slave raiding and banditry, the Aduana warriors of Nyanaw and its environs were bandits always working on ɛkwan ‘path,’ mu ‘inside’ and fo ‘people’, i.e., ɛkwanmufo ‘the path people’, which was later corrupted to Akwamufo. Thus, the name Akwamu, according to Romer, was given to them by their rival neighbours and some European merchants, especially the Danes.

By the 1720s, Akwamu’s high-handedness against their vassal states was worsening with daily reports of cruelties executed by the Akwamu royals against others. For instance, two Akwamu prince, Oteng Abransamadu and Oteng Agyare place pebbles in the middle of young maidens’ breast and use them as targets for their shooting lessons. This led to the killing of many young women and aroused anger in their vassal states. The people of Ho regrouped and staged a counter-attack to give resounding beatings to the Akwamu. This defeat is said to have open the cracks in the so-called Akwamu’s military superiority and paved the way for the Kingdom’s decline.

In 1730, the three Akyem groups (Abuakwa, Kotoku and Bosome) and their Mfantse, Assin, Agona and Ga allies led by King of Akyem of Kotoku, Nana Frempong Manso gave a helping hand to the Hilly-Guans and Kyerepongs by fighting the Akwamu at the Battle of Nsakye. The Akwamu were annihilated in this battle that they fled helter-skelter to save their life. Oral account records that the Akwamu called on their supreme deity, Ayesu who came to their aid to help them cross the River Volta to climb up to safety on the Volta Hill where their new traditional capital, Akwamufie is. The Akyem Abuakwa royal, Safori or Ofori Kuma routed the remnants of the Akwamu on the Akuapem hills, and with the consent of the Hilly-Guans and Kyerepongs signed a treaty known as Abotakyi Accord in 1733 to found a new Akuapem State. The Ga state won its sovereignty with a celebratory slogan, Ashiedu Okɛtɛkrɛ, ɔduduw ɔnni amanfo ‘The Resilient Accomplisher, the multitudinous ones who have no deserted towns.’  This was to prove to the Akwamu that despite their powers and invincibility, they have been defeated and chased away to desert their towns.

It should be noted that when the Akwamu were defeated in 1730, some of their warriors who were captured as captives were sold into slavery and ended up in St. John at the Danish West Indies, now United States Virgin Islands. Thus, whilst the total elimination of Akwamu from the Akuapem Hills has given birth to the new nation, Akuapem, in 1733, on that same year of November 23, the enslaved Akwamu warriors in collaboration with other enslaved Africans staged a bloody revolt against the slave owners and managers of the Island’s plantations. Consequently, from 1733, the power of Akwamu in the comity of states in the Gold Coast dwindled in the area of conquest and military might. They, however, continued to “sell the largest number of slaves ‘war captives’ traded inland” to the Danes in 1744.  Their two able Kings, Darko, ca 1781 and Akonnor II, ca. 1792 waged wars to annex Peki, their eastern neighbour, which exercised overlordship over a large area. Akwamu was brought to its knees when the Asante Kingdom emerged as a powerful state and conquered the southern states including Akwamu, Akuapem and the Akyem.

The History of Kwahu Atibie