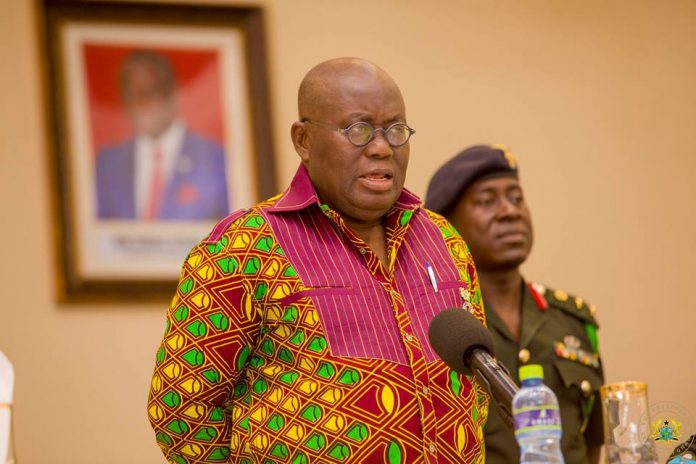 The President of the Republic, Nana Addo Dankwa Akufo-Addo has indicated that agriculture remains the fuel that powers all our activity in Ghana, and has assured farmers, food crop farmers, fish farmers and livestock farmers that they will all have the support and respect they deserve from his government.

According to President Akufo-Addo, “if we are to make any meaningful change in the lives of people, our efforts must be directed at agriculture. The majority of people can only feel a change in their lives when we develop agriculture.”

To this end, the President has stressed that “we need to raise agriculture to a higher plane to be able to improve on the quality of life for our people.’

President Akufo-Addo made this known on Sunday, 15th October, 2017, when he celebrated the 41stKobine Festival, with the Chief and people of Lawra, in the Upper West Region.

Addressing the gathering at the festival, President Akufo-Addo bemoaned the decline witnessed by the sector in recent years, resulting in food becoming unnecessarily expensive in a country that is blessed with fertile land.

“Our production methods are not modern, and income levels of farmers and fisher-folk remain low, making the sector unattractive to the youth as a viable means of livelihood. Indeed, the poorest people in our country are engaged in food crop farming,” he lamented.

With Ghana making some progress, especially in the cocoa sector, the President stated that not enough progress has been made in the production of staples, like rice, maize and soya.

“Agriculture should not be a single-crop industry. Farming is a business and it is a profession that must be promoted and studied like all other professions.

Ghana has the unique potential to feed her growing population, meet the raw material requirements of our processing industries, achieve food security, and compete successfully as a leading supplier to countries around us and beyond,” he said.

It is for this reason that his government launched its flagship programme, Planting for Food and Jobs.

The Programme, according to President Akufo-Addo, has ensured the provision of improved seeds, the supply of subsidized fertilizers, the provision of dedicated extension services, a marketing strategy and the use of e-Agriculture.

“In anticipation of a bumper harvest, the National Buffer Stock Company Limited has been resourced to provide ready market for farm produce. This will ensure that our farmers are paid minimum guaranteed prices, to make farming a viable venture.

The Agricultural Development Bank, and some selected rural banks, have been engaged to make sure that farmers are paid promptly for their produce,” the President indicated.

Through the 1-District-1-Factory policy, the President noted that government, in partnership with the private sector, will soon establish agro-processing factories, which will make use of the produce of farmers.

The goal of the agro-processing factories, he explained, will be to provide ready market for farm produce, reduce post-harvest losses, add value to our produce, and, importantly, also create jobs.

“These interventions are geared towards boosting farmers’ incomes, increasing productivity, developing sustainable employment opportunities, and creating a sustainable value chain in the sector.

I am, therefore, using this platform to re-echo my invitation to the private sector, to partner us through public private partnerships, to help provide the requisite infrastructural base to transform the agricultural sector,” he added.

Addressing the concerns of the Lawra Naa, Naa Puowele Karbo III, President Akufo-Addo noted that work is progressing steadily on the Lawra-Han-Tumu Road, and the Lawra-Hamile road.

Following his announcement of the upgrading of Lawra from a District into a Municipality, during his recent tour of the Upper West Region, President Akufo-Addo noted that the road network is being opened up to ensure a more planned municipal capital.

Government, he added, will soon set up a Solar Power Plant to augment power supply in the district, and also ensure the construction of the Dikpe Bridge, which has already been captured in the budget of the Ministry of Roads and Highways.

On the Kambaa Irrigation Project, President Akufo-Addo revealed that the Ministry of Food and Agriculture, last year, engaged the services of a consultant to undertake a feasibility study of the Project.

“If the feasibility report is favourable, action will commence on it, as soon as possible, under the 1-Village-1-Dam programme,” he assured.

On the request for a Cultural Village, the President stated that he has asked the Lawra District Chief Executive to liaise with the Lawra Traditional Council to identify and secure a site for the construction of a Cultural Village, for onward submission to the Ministry of Tourism, Arts and Culture for necessary action to be taken.

Taking note the Lawra Naa’s comments on climate change, and the need to strengthen the response of local government authorities to the threat, President Akufo-Addo assured that they will be acted upon.

The President informed the Lawra Naa that the Government, with the assistance of the Government of Canada, is purchasing 3,000 motorbikes and 250 pickups to resuscitate the extension services to the farmers.