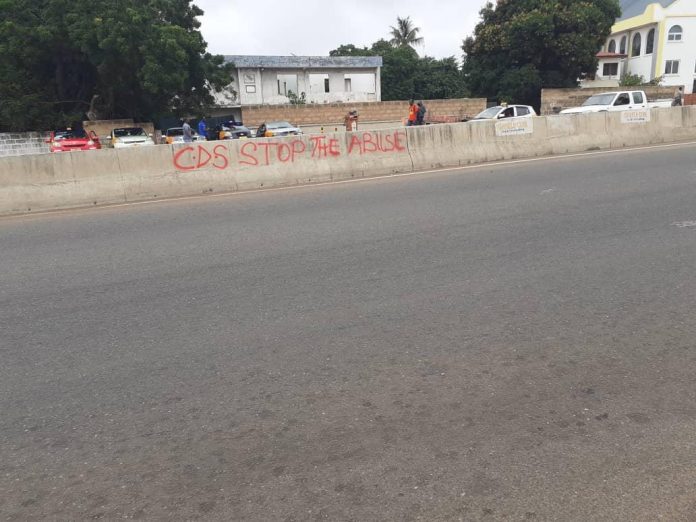 Almost 40 years after the June 4 mutiny which cascaded into civil, political life, soldiers appear to be reveling against the authority of the Military High Command and for that matter the Office of the Chief of Defence Staff (CDS).

While DAYBREAK had been privy to grumbling among officers and other ranks for some time now, those undercurrents are concretizing in expressions of open rebellion in which officers and men no longer fear writing on walls in public military environment, attacking the CDS.

One writing which appears too vivid among the lot was: CDS, STOP THE ABUSE.

DAYBREAK gathered other such notices appeared at Burma Hall, with yet others appearing at the CDS’ old, demolished office inside Burma Camp.

Frustrated, the Defence Intelligence had to move in to attempt tidying up the notice which was in very thick paint.

From the Burma Camp through the Elwak-37 Military Hospital principal route, notices have been posted in large handwritings warning the CDS over his inability to take charge, resulting in discontent over promotions, soldiers being compelled to go on land guard duties, and civilian attacks on soldiers which case, officers and men believe is being shelved because deployment was flawed in practice as far as military conventions are concerned.

Under the tenure of the current CDS, soldiers faced huge challenges dealing with civilians, including that case related to mining in which Major Mahama was killed. Additionally, the military came under public scrutiny when some residents of Dome Faase near Obom in the Greater Accra Region were accused of assaulting two soldiers over a piece of land in the area.

The soldiers clashed with the residents while protecting the property for the controversial Mponuahene of Akyem Apedwa who incidentally is an ex-soldier and who had claimed is the custodial owner of the land.