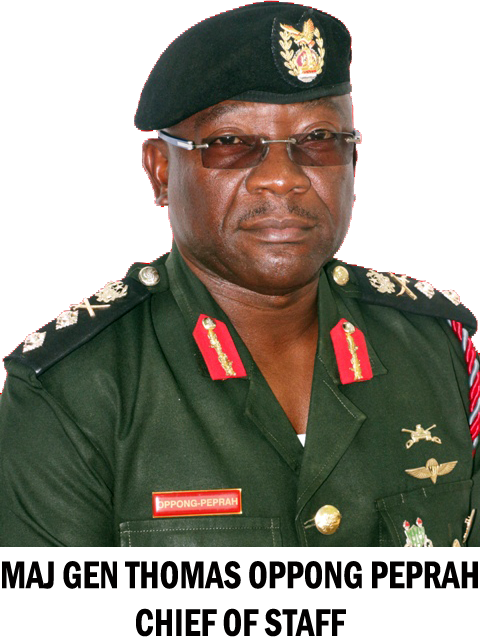 On 29 Sept. 17 at about 1510 hrs, Lt Col FK BANNERMAN (GH/3004), the Commanding Officer Ghana Military Police tasked the Special Investigation Branch to apprehend and conduct a search at the residence and vehicle of 188240 WOI AWAYA INUSAH of MA TS HQ.

A team of investigators led by Lt Col FK BANNERMAN (GH/3004) departed the unit to Southern Command, the residence of WOI AWAYA Inusah. On same day at about 1600 hrs. the Warrant Officer was apprehended behind his residence and a search was conducted in his Mercedes Benz with registration number UE5555-17 which was parked in front of his accommodation but nothing incriminating was found. A further search was conducted in his rooms and a brown ladies bag containing five (5) pistols and a pump action gun with ammunitions was found in the old disused toilet facility in his house.

Thereafter, WOI AWAYA was interrogated and a caution statement recorded from him. During interrogation, he admitted that he bought and brought the weapons from Lebanon during his tour with UNIFIL GH 83. It was also revealed that there were others who also bought and smuggled the weapons from the mentioned GHANBATT into the country. The Warrant Officer was subsequently detained in GMP guardroom on 29 Sep 17.

While investigations were ongoing, on 1 Oct 17 at about 1600 hrs, 192633 Sgt ADU-OFORI Amos of GHQ (EME) attached to 37 MIL HOSP was arrested at Chiringa Barracks within Burma Camp. He was interrogated and he admitted buying weapons but stated that he gave it to WOI AWAYA for safe keeping. A search was conducted in the residence of Sgt. ADU-OFORI and a Zoraki pistol was retrieved. He was later detained in Reece Regiment guardroom on 1 Oct 17.

On 2 Oct 17 at about 1000 hrs, 194591 SGT YENTUMI-AFFUL Ernest also of GHQ (EME) and attached to 2 Reece Squadron was arrested at Sunyani. A search was conducted at his military quarter in Sunyani but no weapon was found. He was interrogated and he admitted purchasing weapons but stated that they were being kept at the residence his father in Accra. He was escorted to Ashaley Botwe old town, the residence of his father and three (3) pump action guns and a pistol were retrieved. He was subsequently detained in 64 Infantry Regiment guardroom on 2 Oct l 7.

Again, on 4 Oct 17 at about 0940 hrs, 191168 POII QUAINOO Paul Kumi of WNC (GNS YAA ASANTEWAA) was arrested at Tema while on the Senior Rating Administrative Course. He admitted purchasing a pump-action gun and a single barrel weapon at Lebanon but claimed he had disposed off the weapons in the sea at Sekondi in the Western Region. He was escorted to Accra and detained at the Def MT Bn guardroom on 4 Oct 17. After further interrogation, on 12 Oct 17, a pump-action gun and a single barrel gun were retrieved from his military quarter at Sekondi where he was escorted to.

A photograph of all the suspects with the respective weapons they purchased and brought/shipped from Lebanon was taken at Ghana Military Police Headquarters on 13 Nov 17. The sea freight box which was used to transport the weapons from Lebanon to Ghana was also seized and a photograph of it taken.