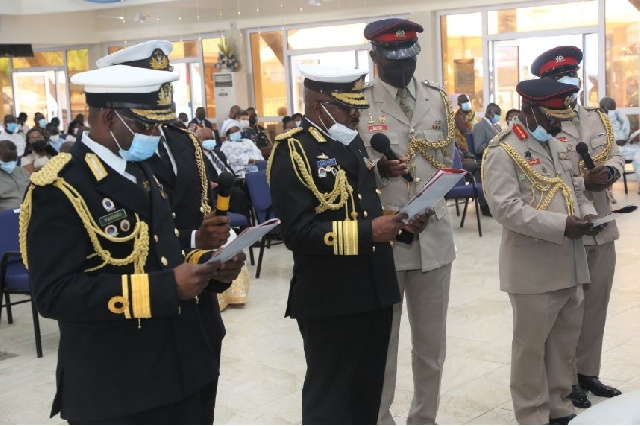 The Chief of the Defence Staff (CDS), Vice-Admiral Seth Amoama; the Chief of the Naval Staff (CNS), Rear Admiral Issah Adam Yakubu; and the Chief of Staff (COS) at the General Headquarters, Major General Nicholas Peter Andoh, were officially inducted into office on Sunday, 9 May 2021.

This follows their appointment by President Nana Addo Dankwa Akufo-Addo.

The induction ceremony, which was held at the Garrison Methodist Presbyterian Church at Burma Camp, was on the theme: “You are a chosen vessel of Christ”.

In his sermon on ‘The man or person God chooses’, the Moderator of the General Assembly of the Presbyterian Church, Ghana, Rt Rev Prof JOY Mantey, said God chooses all manner of people in diverse ways, whether through election, appointment or by nomination.

He sighted Abraham in the Bible, who came from a pagan home and was chosen among his people to be the father of all nations.

Rt Rev Prof Mantey, urged the three Generals to be strong and courageous, for the Lord was with them just as He was with Joshua when he took over the mantle from Moses to lead the Israelites to the promised land.

The CDS, on behalf of the CNS and COS, pledged and committed themselves to work to the glory of God for the betterment of GAF and Ghana in general.

He conveyed his goodwill message to the all-ranks and the civilian establishment for their support since his assumption of office.

He further commended the all-ranks for their loyalty, vigilance, integrity, dedication and professionalism that had aided to maintain the much-needed alertness and readiness amid the challenges in certain segments of society.

He further encouraged the all-ranks to maintain their positive attitude to enable them to discharge their duties with honour, pride and dignity.

“It is, therefore, crucial that we eschew apathy, complacency and unprofessional attitude in the discharge of our duties”, he added.

The Minister of Defence, Dominic Nitiwul, the guest of honour for the occasion, in his remarks, urged the new leaders to continue to give off their best for the success of GAF and the country.

He called on the congregation to “give them the needed support by making use of our individual and collective strength to become agents of change in our own little ways.”

He also called for the needed support from the rank and file of GAF for the CDS to enable him to achieve his mandate.

The dignitaries present at the service included the Senior Advisor to the President, Mr Yaw Osafo Maafo; Minister of Foreign Affairs and Regional Integration, Shirley Ayorkor Botchway; members of parliament, traditional leaders, senior officers, heads of sister security services and some members of the diplomatic corps.