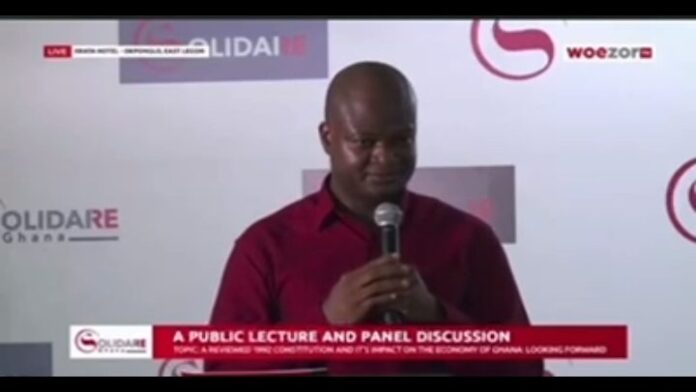 The Dean of Faculty of Law at the University of Ghana, Professor Raymond Atuguba has predicted imminent coup in Ghana following the state of the country’s economy.
According to him all the indicators suggest that the was ripped for the military to return to power.
Prof Atuguba, a former Executive Secretary explained that Ghana is so broke and that may trigger a coup in the country if something was not done to salvage the situation.

The law teacher who was speaking at a public lecture organised by Solidare Ghana, a pro opposition group in Accra on Monday February 28, 2022 said concerns raised by Speaker of Parliament, Alban S. K. Bagbin that salaries of some public sector workers might not be paid in the next three months must not be taken lightly.

“We do not want a coup in this country yet I fear that if we do not act quickly, we may have one in our hand very soon.

“A former colleague of mine at Harvard wrote his dissertation also on Ghana. He now teaches at the War College in US. Imagine the name of the college, War College. Whiles my topic was on the Ghana Police, his topic was on Ghana military. Naturally, our paths intercepted and we’ve remain friends since. My friend’s PhD thesis our on the topic “Why certain coups succeed and while others fail.” His case study was Ghana.”

After using his supposed friend PhD thesis as case study to make a claim, he stressed further using his forecast, saying that “My current assessment that Ghana maybe ripe for a coup partly springs from the knowledge I gained by accompanying my friend through part of his doctoral research on this topic.

“It does not help matters if we consider Samuel Huntington thesis on the snowballing effect of coups in the sub-region and the closeness of recent coup to home.”

He therefore urged the Minister of National Security, Kan Dapaah to engage his friend at the War College.

Speaking on the topic the economy of Ghana today, Dr. Atuguba stressed that ” A big part of why other coups succeed and other’s fail is the economy, asking that ” what’s the state of Ghana’s economy today? ”
“At the level of the most irreducible demacesity, Ghana is broke. Your nation is radically broke. So broke the Speaker of Parliament has publicly warned Government in hand that we may not be able to pay salaries of public sector workers in some three months unless a miracle happens. The Minister of
Finance has waded in a very fine and polished English, he says something like ‘the legitimate reality is that there’s no money”. At least he has confessed to us that there are legitimate realities.”

Prof. Atuguba prediction appears to fall in line with some people standing trial for causing fear and panic.

He appears to be the second person associated with former President John Dramani Mahama who have been speaking the coup language.

One of search personality is Oliver Mawusi Barker- Vormawor, the convener of #FixThe Country Movement, who is standing trial for treason felony for allegedly threatening to topple the government.

He was picked up when he touched down at the Kotoka International Airport.

Police have said his arrest was a result of a post he had made on Facebook threatening to stage a coup if the controversial Electronic Transaction Levy (E-levy) is passed.

“The post contained a clear statement of intent with a possible will to execute a coup in his declaration of intent to subvert the constitution of the Republic,” the statement added.