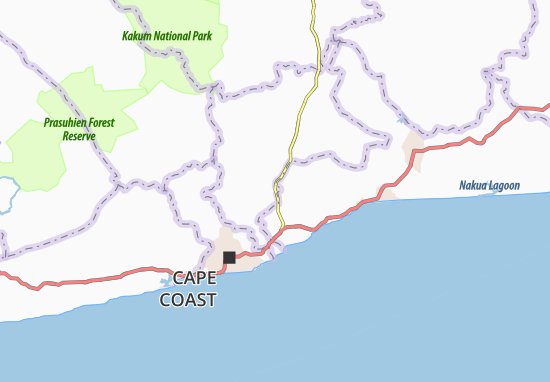 Originally, Asebu people spoke a different strand of what others considered as a Guan language but they were not Guan. This emanated from their earlier association with the Efutu and the Etsi in the enclave. The emergence of the Akan Bɔrbɔr Mfantse group on the coast and their defeat of Asebu led to Asebus incorporation into the Mfantse polity. As a result, Mfantse language became their ‘mother tongue’. Hence, the Asebu now refers to themselves as Mfantse. The name Asebu is from Sabou, and it means “countless warriors.”

Asebu is one of the earliest states that were on the coast when the first Europeans landed on the Gold Coast in 1471. This positioned them as one of the first people to transact business with Europeans before the Akan groups led by the Mfantse, Adanse, and Assin came into contact with the Europeans. During this early contact with Europeans, people from other ethnic groups from different parts of the Gold Coast came to settle there to farm, trade, and engage in other economic activities.

Because the early Asebu town was surrounded by other aboriginal ethnic groups, including Efutu, Etsi, and the Guan-Anum (then on the coast), the town earned the byname, Amanfi ‘one that is encircled by other towns.” Asebu’s appellation was Ɔkwantsew “the one which is on the main road.” Asebu used to be patrilineal people who were small in size, especially their women. Meyerowitz (1974: 86) states that their bodies were plump, their skin coarse, their heads square in shape, and their plentiful hair is woven into mpɛsempɛse “dreadlocks” with cowries. Their warriors fought with bows and arrows, the arrowheads being made of flints. The Supreme deity of Asebu is Nana Sabou, the river god. This deity is the water he carried from around the territories of Lake Chad. The shrine of the Sabou deity is placed at the centre of the Asebu Amantsindo community. One of the famous people from Asebu is Dr. Arthur Kobina Kennedy, a renowned medical practitioner.

There are two contesting oral traditions about Asebu’s origin. Anthropologist Eva L. R. Meyerowitz contended that a giant called Asebu Amanfi migrated with the people of Asebu from a ‘place in the desert beyond northern Nigeria.’ This means they may have come from the upper Nile or the Sudan-Ethiopia enclaves, often regarded as the cradle of mankind. They may have left their original settlement as a result of war and migrated to Lake Chad where they lived by the side of a river called Sabou. It is believed that it is from this river the state derived its name ‘Asebu’, meaning “countless warriors” (Allou 2008:184; Foot & Jones, 1903:21).  The Asebu moved southwards to the Bini (Benin) region at a time ‘when the tribes there were fighting each other.’ Meyerowitz (1974:85), however, contended that in avoiding the conflicts in the area, Asebu moved on to finally settle at the southeast of Benin City in a country (which is still named after them, -Sabou/Sobo). Thus, Sabou was in Benin, and not in the Lake Chad enclave.

Asebu lived peacefully in the Benin area for several years until ‘the arrival of a people whose men wore thirty-two marks on their faces and their women sixteen” (Meyerowitz 1974: 85). These ruthless warrior groups forced Asebu to move to the Ile Ife region, which is in the north of Benin City. They continued their journey by moving to the coast to find uninhabited land to settle in.  They constructed boats from ’light pieces of flat wood’, or made out of ‘large calabash’. The women, the potter, the carriers of their sacred stone figures, and the blacksmiths, to whom the sea was taboo, walked along the beach (Meyerowitz 1974: 85).

Hence, by the flat wood/calabash sea boats and trekking on the shores from Benin, the Asebu finally stopped at Brofobepɔw (European Hill/Brow of Promontory) on the Moree beach (Opoku 1969:82). It was this spectacle that underpins the second oral tradition of Asebu where an eyewitness described the Asebu as people that emerged from the sea on the backs of whales. It is said that Asebu Amanfi the Giant, his two brothers: Nana Mbro and Ɔfarnyi Kwegya, and their sister Amanfiwa led the people alongside other patriarchs including Nana Tsikwadu, his elder brother Nana Badu Bonsu, and Aberewa Tsiawiem Efuwa (Opoku 1969:82). The movement from the sea and the shores to the land took five days because of the sheer number of their population. Their number was only cut short when a certain hunter who saw this spectacle clapped his hand and exclaimed, wɔ dɔɔso papa ‘how numerous!’ (Reindorf 1895:268; Sanders 1980). These words caused the line of people coming from the sea to suddenly cease. The people upon moving upland built their first settlement, Asekyere Bedzi close to Brofobepɔw (Meyerowitz 1974:85).

At Asekyere Bedzi on Brofobepɔw, Opoku (1969:83) posited that Tsikwadu with his elder brother Badu Bonsu and Aberewa Tsiawiem took the westwards trajectory to found the Ahanta States of Busua, Dixcove, and others. Asebu the Giant, his brothers, sister, and entourage climbed Dadze Koko ‘Iron Hill’ and descended to the base of Aberewanfo Koko ‘Old lady does not climb Hill.’ Here, Kwegya subjected the Etsi who were already living at the fishing village of Asekyere Bedzi on the Brow of Promontory or Moree after a fierce battle.  Asebu the Giant and his favourite sister took the Akotekua/Akatakyiwa routes to settle at Fonfompɔwmu “the silent grove”. It was the place where the Asebu buried their dead after their war with the Etsi. From here, they moved to the interior to found Asebu state. Asebu became a powerful state which was surrounded in the area by the Etsi and powerful Guan State headed by Nana Andoh Asimen, whose people later fled the area to Akuapem hills, Anum-Boso, and some parts of the Volta, Oti, and Bono areas (Anti, 1969:44-49).

Asebu the Giant became the very embodiment of the Asebu Kingdom. He fought and defended his new state with all his might until it became a unified and stronger state (Asante 2008). And because Asebu state was surrounded by the other rival Guan and Etsi states that Asebu the Giant later defeated them, he earned the by-name, Amanfi ‘the one who is encircled by other states.’ Hence, he became Nana Asebu Amanfi I. When the Portuguese arrived in 1471 and the Mfantse had not yet arrived on the coast, Asebu state was there. Asebu the Giant’s brother, Mbroh traded in European drinks, thus the name Mbrosa for European drinks (Reindorf, 1895:264). Asebu the giant has a lot of legends, it is said that he eats huge calories of food so he carried his barn, in which his sister roasted corn for him, thus the appellation, Ɔkɛse a, ɔsoa ɔsan ‘The giant who carries a barn’.

Asebu reigned over the other aboriginal groups until the Bɔrbɔr Mfantse came to the area. The Mfantse after suffering many defeats at the hands of Asebu the Giant used their ancient trick of marrying one of their beautiful women to Asebu Amanfi. The woman who was given to Amanfi had a son, Kwegya Akwa who was the Mfantse war captain from Anomabo. Tapping information from his mother, Kwegya Akwa got to know that Asebu Amanfi had contracted guinea worm infestation. He immediately attack Asebu and defeated them. Asebu Amanfi was said to have moved quickly to Ananawam and vanished into thin air.

Asebu Amanfi’s legendary feats and legacies are the very fabric of the Asebu State history. He was the first King of the Asebu and their Amenfi I. their annual festival Apayemkese (Passover) is celebrated in his memory. As a giant and a warrior, he left behind several relics which the people of Asebu cherish. There are equally other monumental landmarks and sites attributed to his exploits.

There is Amanfi Afena ‘Amenfi Sword’, which is located at Abura, near river Asokwa. This sword is believed to have been used by the giant in his escapades. History has it that he thrust it onto the ground and it has forever remained so and all attempts to remove it have proven futile.

There is also a ‘Cover Stone’ around the same river. This big rock has the fingerprints of Asebu embossed on it. It is said that, when enemies were attacking, he lifted the rock and hid behind. This event led to his fingers and palms perpetually getting embossed on the rock.

The grove Fonfompowmu where Asebu first settled after his wanderings can still be found in Akatakyiwa community. Asante (2018:12) contends that “these historical landmarks and others that are yet to be explored have not been given the proper place in the development trajectory of the Asebu community. These historical landmarks and relics can be used to create a viable tourism industry in this community to begin the process of community development and urbanization.”

Asante, Evans. “Beyond the History and Reverence: Cultural Heroes as Factors of

Foot, Lionel R., and Jones, Thomas Freeman Edward. The Gold Coast and the Fantis: A

Reindorf, Christian Carl. History of the Gold Coast and Asante: Based on Traditions and

Historical Facts, Comprising a Period of more than Three Centuries from about 1500

Sanders, James Robert. “The Political Development of the Fante in the Eighteenth and