Ghana Police And Politicians: Can The Police Hierarchy Ever Be Neutral? 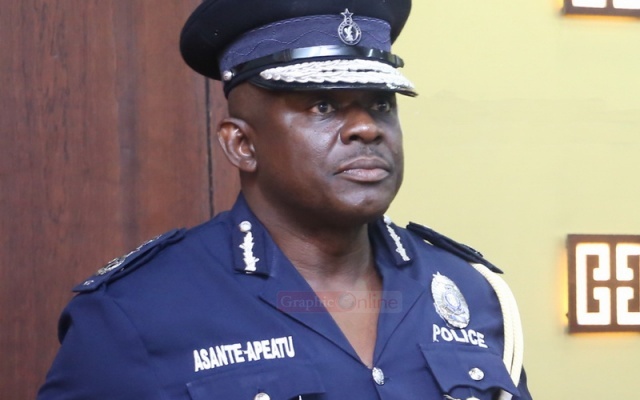 Last week saw massive media attention on Ghana Police Service. Unlike its counterparts, Ghana Armed Forces (GAF) and the Ghana Prisons Service, whose actions receive favourable media attention, the Police has always been in the media, and most often for a very bad reason and publicity.

Mr. Oduro`s dismissal did not go down quietly; he has also been accused by the maverick Member of Parliament (MP) for the Assin North, Kennedy Ohene Agyapong for being the mastermind behind the fueling of “the activities of land guards who were allegedly terrorizing residents and seizing their legally acquired lands in the country.”

As if that was not enough, Assistant Commissioner of Police (ACP) Maame Yaa Tiwaa Addo-Danquah, who replaced Mr. Oduro as the acting CID boss had her tape conversation with the Ghanaian local-rapper turned politician, Kwame Asare Obeng aka A-Plus, leaked to the section of the media.

It is quite interesting how a senior police chief of her caliber could kowtow so low to engage in the kind of conversations she had with this low-level wannabe politician, A-Plus, in her bid to secure political promotions in the current New Patriotic Party (NPP) administration.

These seemingly acts of unprofessional behaviour on the part of the top brass police officers with some shady characters and politicians in the country and the opaque modus operandi from the corridors of the Inspector General of Police (IGP) and the Government (Minister of Interior) with regard to promotions, transfers and dismissals, without providing sound reasons to the public, is quite appalling. It flouts democratic principles of transparency and fair play which also forms part of the government`s social contract responsibility to the people.

A point that is crucial to remember in this connection is the fact that the police force is a mirror of society. One cannot expect much from a law-abiding, accountable and professional police organization in a country where there is no respect for the laws.

Politics, people and the police

The rule of law and separation of powers as a mechanism for accountable function of government has provided platform for police administration to maintain peace and order.

Unfortunately, the police as internal security apparatus had, however, not been able to extricate itself from the typical politicians as the army after its turbulent interferences into politics had done.

The reason for the politicization probably could be the fact that the police officers maintained peace and order in the communities. Their nature of their work brings them closer to the people more than any other security agencies. Thus, they are able to establish links with the law abiding-citizens from the lower to the upper strata of the society. They are also prone to meet and, sometimes, work with criminal and deviant members of the society such as the mafiaso, armed robbers, murderers, drug-barons, petty-thieves, prostitutes and many others.

The police also come in contact with the politicians, pressure groups and or civil society organizations, and religious entities. This makes the police part and parcel of the very society they are legally mandated to protect. Thus, there is strong link between the people and the police.

As a result of these contacts with every member of the society in furtherance of maintaining peace and order, the police officers had also used the power players, especially politicians and powerful criminal groups in the community and government to further their personal ambitions with regard to promotions and transfers; and in certain cases caused the dismissal of their fellow police officers. These behavior of the police in using external power players to achieve certain dreams in their career is also product of the Ghanaian society in which they operate.

Politicians in Ghana, in their bid to get favourable justice and opportunities for permits to engage in partisan activities such as demonstration and protection of their erring party activists, show an insatiable appetite for control of the police who are delegated authority by the state to use their considerable power.

This phenomenon accounts for the mixing of police and politics, but it is also a fact that no matter the system of police administration run in a country, there shall always be an existence of understandable linkages between the police and politics. It is argued that the role the police play in society places them right in the middle of the politics. The police actually make policies about what laws to enforce, the extent to which they should be enforced, against whom, and on what occasions.

It must, however, be noted that there is a crucial distinction between being political and being politicized. Policing may be inescapably political, but it may not be politicized, that is, the center of overt political controversy over its manner, tactics or mode of operation and organization.”

In advanced countries sterling professional administrative practices has been pursued to avoid the politicization of their police services to some extent, but overt politicization of the police is still prevalent in this country as portrayed by the two events of last week.

Ghana politics and the police

It is argued by the political scientists that the type of political system in a country dictates largely the type of police in that country and the police sub-culture is by no means radically distinct or deviant in its values from either legal or popular morality. This view flows from the premise that the police are broadly representative of the population.

Our national politics is based on clientelism and patrimonialism. In ordinary terms, our politics is all about scratch my back and let me scratch yours. The elite consensus in tandem with democratic practice is the periodic election of people to run the affairs of the state in trust of the people.

In this hot political contestations for positions in presidential and parliamentary elections to the Flagstaff House and Parliament, various expertise and individual help are sought to make dreams achievable.

In the case of change of government, the opposition party now government-in-power, also targets police officers who were praised and promoted for using excessive force on their members. These police officers are also transferred from their juicy stations to the hinterlands or are made redundant in their positions as new people are appointed to micro-manage them. The officers who were transferred to the hinterlands by the previous administration for being moderate to them, are recalled or transferred back to their previous or juicy stations by the new government.

In some cases, these officers are selected for international police assignments such as peace-keeping, conferences and trainings. This is currently one major political turf game in the Ghana Police Service.

Politically neutral but excellent and professional police officers are worse off in this politicization game in the police, because the politicians prefer people whom they are assured of their loyalty to their interests.

The case of ACP Akrofi-Asiedu

The former Greater Accra Police Commander, Assistant Commissioner of Police (ACP) Douglas Akrofi-Asiedu, I am told was a very fine police officer. Under the Kufuor-led NPP administration he became a target of attack by the opposition National Democratic Congress (NDC). In 2006, Akrofi-Asiedu commandeered his officers to maintain law and order to the Concerned Ghanaians, a pressure group of opposition political parties (mostly NDC) protesting against the Representation of the People (Amendment) Law (ROPAL).

During the demonstration some protestors started pelting the police officers including the Deputy Inspector-General of Police, Dr Kofi K. Manfo with stones. In self-defense, the police was given command by ACP Akrofi-Asiedu to charge on the demonstrators to arrest the perpetrators.

In trying to effect the arrest some protestors were beaten. From that day, ACP Akrofi-Asiedu was criticized mercilessly as pro-NPP and nicknamed “Charge!”  His subsequent appointment as the National Disaster Management Organization (NADMO) boss gave credence to the opposition`s the accusation that he was NPP.

Sources at the police hinted that when the NPP lost power in 2008, Akrofi-Asiedu left NADMO immediately, but he was subjected to intensive investigations by the Mills administration to find him corrupt. Officers who were on duty on March 2016 ROPAL demonstration were also transferred.

Has the Police learnt any lessons?

The political game at Ghana Police Service has come to stay and would never end. Both politicians and the police officers are interested in ensuring its continuity as long as it gave them mutual benefits. They understand the power-play and the hazards thereof. Thus, some police officers deliberately tie their uniforms to political parties without same in discharging their duties. They know that as long as the power continue to shift, the position they want is always achievable once their party is in power.

This is the reason why in Ghana police high ranking officers are normally given contracts to stay on after their retirement. Police officers after using their police profession to do favours to their parties and political god-fathers are not lucky to get their promotions to high office when their party assumes the reins of governance.

Thus, their political god-fathers are forced to give them contract as a form of gratitude. Since 1992, this has been the situation with regards to the position of IGP where various regimes have extended the retirement age of the IGPs to enable them to enjoy the honour of the office and to make money for their retirement after contract retirement.

Recently, the IGP, Asante-Appietu, was handed two more years by the President after his retirement age to enable him to enjoy for what we are told “his exceptional knowledge.” Anokwa!

As if, if he dies today, we cannot have his replacement. It is all about police and politician razzmatazz within the context of political clientelism and patrimonialism. This is why ACP Addo-Danquah will go down to a political minnow like A-Plus to engage in idle chat to win him to do her biddings for a new position, and an NPP MP for Sekondi will also go on air to defend her actions. It is all political “kokofu” football. Quite shameful!

As a country we must strive to change this pattern of collusion between politicians and the police. It affects equity and justice in application and enforcement of the law in the country.

That is why Delta Force, NPP`s vigilante squad in Kumasi could pull that shameful stunt. Let us not forget that a police system cannot be transformed from top to bottom unless the society it serves is transformed as well.

If Ghana police pay too little heed to the law to abstain from politics, it is because their countrymen do the same in their various non-partisan offices.