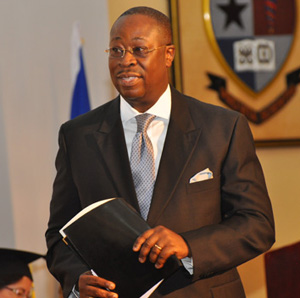 Ghana has saved more than $3bn in exports value following the introduction of the Letter of Commitment module (LOC) by the Ghana Community Network Services Limited (GCNet) for the Bank of Ghana to track the repatriation of export proceeds into the country since July 1, 2016, Head of Foreign Bank Operations of the Bank of Ghana, Mr. Eric Hammond has said.

Between July 2016 to June 2017, exports proceeds repatriated amounted to more than $4.2bn through the LOC system by GCNet. Currently there are thirty three (33) participating banks using the LOC with core functions to process Bank pre-registration requests and remittance registrations.

Speaking at a GT Bank sponsored stakeholders’ session for Importers and Exporters recently, Mr. Hammond advised exporters to ensure that all export transactions are conducted using the LOC on the GCNet eMDA system which is a paperless platform to facilitate the easy and immediate reconciliation of transactions in the event of any challenges associated with proceeds transfer and also ensure that updates on LOC with funds received are duly tracked.

The BoG senior official explained that the systems was put in place to increase foreign exchange availability to the forex market and facilitate the stability of the  GHS (cedi) in relation to major trading currencies.

This has significantly boosted the drive to address an annual estimated loss of $3bn, which make up a third of the country’s value from exports proceeds through the violation of the foreign account regulations.

The introduction of GCNet’s LOC by Bank of Ghana has aided in the elimination of human elements and interference in export monitoring as well as ensuring in the tracking of exports proceeds into the country and also boosting the availability of forex in the economy.

Mr. Hammond further reminded participants that as part of the process of ensuring proper repatriation of export proceeds, exporters were required to include the LOC reference number on the SWIFT advice as part of the shipment document to the importer.

Acting TradeNet Manager of GCNet, Mr. Eben Engmann explained the deployment of the LOC had facilitated the tracking of utilized and unutilized export LOCs in real time, tracking of LOC remittance, processing of remittance reports in real time as well as ensuring the assignment of retention/ repatriation percentages to exporters electronically.

He further intimated that the LOC had made it easy to segregate commodities in different groups for ease of reporting and allows the Bank of Ghana flexibility to monitor receiving banks and advice on remittance registration to track proceeds.

He also urged Exporters that had difficulty to quickly notify the Bank nominated on the LOC, showing evidence of SWIFT advice indicating that monies had been received in respect of that LOC so the matching could be done and reconciliation executed.

The Letter of Commitment (LOC) is a module on the eMDA portal, developed and deployed by GCNet for the Bank of Ghana at no cost to the Bank. All exports related activities are captured to ensure effective monitoring of export and repatriation of export proceeds. This has resulted in cost reductions through minimized clerical efforts, time taken to process export documents and elimination of delays as well as reduction in face-to-face meetings while deepening greater transparency.