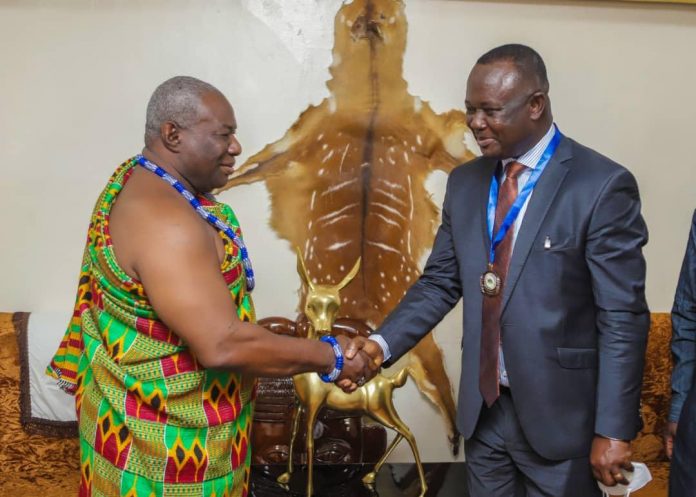 Mr. Joseph Osei-Owusu, who doubles as Member of Parliament (MP) for Bekwai, was decorated with a custom-made medal as a symbol of the prestigious honour conferred on him when he paid a courtesy call on Neenyi Ghartey VII at his Royal Palace on Monday morning.

The First Deputy Speaker expressed his gratitude to Neenyi Ghartey VII and the people of Effutu for the honour done him.

Joseph Osei-Owusu and the Parliamentary delegation were in Winneba, capital of Effutu, for the opening ceremony of the Extraordinary Session of the ECOWAS Parliament being held in the constituency.

Some 115 Members of the ECOWAS Parliament from the respective member states have been in Winneba for a little over a week now and from October 13 to October 16, attended the sub regional body’ High Level interactive seminar which was officially opened by President Nana Akufo-Addo in his capacity as Chairman of the ECOWAS Authority of Heads of State and Government.

The Seminar which ended over the weekend is followed by an Extraordinary Session of the ECOWAS Parliament from October 18th to 22nd, also in the Effutu Constituency where Alexander Afenyo-Markin is Member of Parliament.

The selected theme for the High Level and Interactive Parliamentary Seminar was “High Level Evaluation on Two Decades of Democratic Elections in the ECOWAS; Achievements, Challenges and the Way Forward.”

For the Extraordinary Session, the focus would be mainly to consider and adopt the draft 2022 Budget of the ECOWAS Parliament.

President Akufo-Addo is expected back in Winneba on Tuesday October 19, 2021, to commission some 10 different developmental, beautification and cultural heritage projects all funded by Alexander Afenyo-Markin.

The projects include a newly built ultra-modern Police station at Atietu, a multi-purpose Community Center at Essurekyire, the Osimpam Heritage Center at Copa Junction and a clinic at Kojo Bedu.

The rest are a beautification project with historical and cultural antecedent, a community center, a clinic and a library all at Akosua Village.

The President would also be commissioning the newly refurbished Winneba Roundabout that has some 4 statues representing historical and cultural landmarks.

Ahead of the ECOWAS Parliament Seminar and Extraordinary Session, the Effutu Constituency has been bussing with several activation and awareness creation activities including the organizing of a beauty and brand pageant and a football league competition from some 32 teams across the constituency.

Several roads are also being tarred with close to a thousand streetlights installed across the main streets.

Almost hotels in Winneba have been booked for guests and participants and the town cleaned.

The general talk is that never before has Effutu had such number of high profile persons in international repute coming into the area to stay for some two weeks and apart from the meeting, see the Efutu town and the culture and traditions of its people.