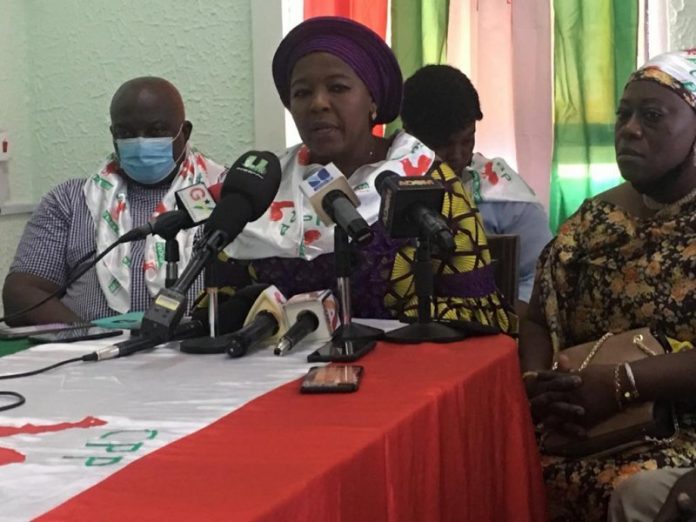 The Convention People’s Party (CPP) on Monday registered its displeasure on the sudden termination of its contract with Atinka Television.

It is demanding full disclosure of the authority which ordered the unilateral abrogation of the contract and cancelation of its programmes on Atinka Television.

This comes after a sudden termination of its contracts with the station on Saturday without prior notice and reasons till date.

Madam Akosua Frimpomaa Sarpong Kumankoma, Leader and Chairperson of CPP, speaking at a press briefing at the Party’s Headquarters, said CPP’s main focus was to ensure the welfare of the citizens of the country.

She said that it was the party’s firm belief that the private sector including the media was the engine for the country’s socioeconomic development, adding that if they had a contract with a private TV station which they paid for only to be eliminated from their broadcasting programme lists based on the orders from someone above, then it was not a good sign of democracy.

Madam Kumankoma said the content they broadcast to their viewers were things not meant to fight the government but rather to help in the government’s development agenda in the country.

She added that they were showing content that CPP represented as a political party and what they believed represented the welfare of the people which included what the party did in the past, what they would do when given the opportunity to govern the country.

Madam Kumankoma stated that they did not understand why a private media organization which they had a contract with an entity which did not owe them would suddenly cancell a programmed that had been running at the station for some time without any warning.

She said to ensure development of the country, institutions must work including the media; both government and private.

The Leader and Chairperson of the party said Atinka TV did not inform them of any violation of the contract on the part of CPP before taking them off their Channel.

She said all programmes they had done and aired on Atinka TV was to bring to the fore issues on the plight of the vulnerable and most deplorable in society.

“Bringing these stories is rather the best way to build our fragile democracy. It makes them feel that they have a voice and that there is hope,” she added.

Madam Kumankoma further stated that no minister or any such power should feel that they were a threat and that they believed they had a story to tell, adding, “We believe Ghana should hear our story. We cannot do this without the media.”

She urged the media to investigate the issue to help discover who was behind the so called “order from above”.