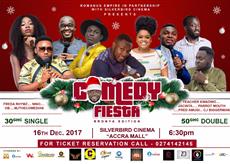 Romanus Empire in collaboration with the Silver Bird Cinema have birth a twist to the serial comedy front that has thrilled audiences to the core.

ComedyFiesta is noted for always bringing the abstract to the norm. As was done in last edition where Lawyer Nti appeared, this edition sees the live debut of the Social Media craze who is known for his short comedy skits; Teacher Kwadwo.

Patrons are urged to carry all their stress bubbled up to the Silver Bird, Accra Mall on Saturday, 16th December, and, the tough circumference of the stress bubble would be burst by the sharp pointed edge of jokes of these sensational comedians.

Comedians on the bill for this month are Comedian OB, Nino, Jacinta, Fred Amugi and the new addition to the Empire, the commander in chief of the Ghana fooling forces; MJtheComedian.

The Bronya Edition shifts from Poetry to Rap music and to hold the lever for that session are the “rap couple”… haven both emerged from the MTN HitMaker fame; CJ Biggerman and the current winner Freda Rhymes.

NB: Audiences are urged to be seated early for the show begins on time; exactly at 6:30pm.