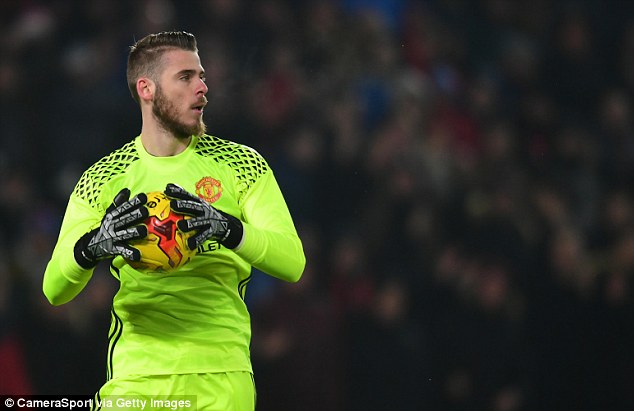 Manchester United are braced for another attempt by Real Madrid to sign goalkeeper David De Gea.

Old Trafford insiders believe a bid is imminent as the two clubs prepare to meet on their US tour in Santa Clara on July 23.

United want to keep De Gea, 26, and will demand a fee in excess of £60million for the Spain goalkeeper. De Gea, who has two years left on his current contract, is open to joining the back-to-back European champions but will not push for a move.

Neither club wants a repeat of 2015 when Real saw a deadline day bid for De Gea collapse because the paperwork was not submitted on time following a summer of intense speculation.

United were determined to keep any mention of De Gea separate from their recent talks with Real over striker Alvaro Morata before switching their attentions to a £75m deal for Romelu Lukaku. But they now expect Madrid to come back to the negotiating table with a firm bid for their No 1.

Sportsmail revealed in May that Real want more Spanish internationals in their team and are prepared to offer a world record fee for a goalkeeper to take De Gea back to the capital where he played for their rivals Atletico before joining United for £18.9m in 2011.

De Gea is more settled at United under Jose Mourinho than he was when Louis van Gaal was in charge and enjoys a close relationship with goalkeeping coach Emilio Alvarez, a long-term mentor of De Gea who was recruited last summer.

United’s return to the Champions League is another factor that could persuade him to stay.

But there were some issues behind the scenes towards the end of last season, not least over Mourinho’s decision to keep Sergio Romero in goal for the Europa League final win over Ajax. The United boss has also been talking up the prospects of third-choice keeper Joel Periera.

It remains to be seen if De Gea will play against Madrid in game four in Santa Clara. The two clubs are also due to meet in the European Super Cup in Macedonia next month.