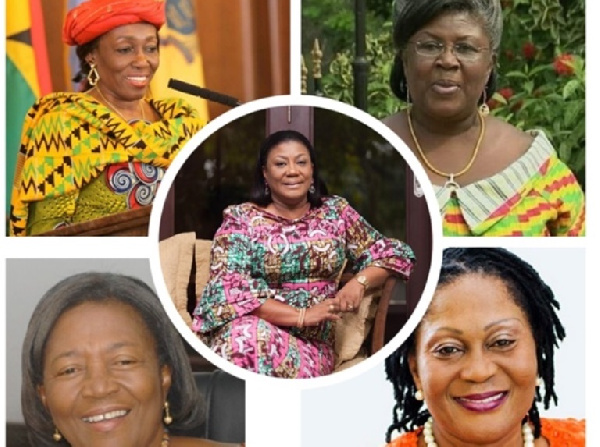 I may not be too old but l grew up to see the activities of the 31st December Women’s Movement led by former First Lady, Nana Konadu Agyeman-Rawlings in the 90s down to the year 2000.

Her NGO works were dotted across the country and every town or village could boast of a school, a learning centre, a batik training and making centre or some women empowering venture with the inscription of the 31st December Women’s Movement. It was so vibrant that in the early nineties, it was seen as the female arm of the Jerry Rawlings led revolution.

It did a lot of work and attracted such huge interest from many well-meaning people in society.

One wonders how the Movement was able to marshal resources to undertake all these initiatives. It was called an NGO, which means it operated outside of government and so had no access to government resources. That’s a different discussion.

How the Movement was funded could be largely attributed to the effort its leaders put to the task and without a doubt, the influence of its founder, the former First Lady. Just like any First Lady, Mrs Agyeman-Rawlings was influential and in her case, she utilized the power her place as the President’s sweetheart gave her to advance the cause of the Movement.

It is quite an interesting way to make use of that power which is not traceable to any provision in the Republican Constitution, 1992. Though the Office of the First Lady, as it has come to be known, operates as a strategic power centre and is deployed to help the President in most cases reach out to the populace, it is not backed by statute. That office has no budgetary allocation, yet it has enough cash to spend on its projects.

What is more, through the work of her Movement, the country promulgated the ‘Intestate Succession Law’, which provides a standard of inheritance for survivors of anyone who dies intestate or without a Will.

For Nana Konadu Agyeman-Rawlings, her husband Jerry John Rawlings was Head of State and President for nineteen (19) years. In that period, she had the power and funds to do all the things she did and to make her NGO flourish.

But immediately after her husband handed over power to President John Kufour and the NPP, the activities of the 31st December Movement diminished and became a pale shadow of itself. We did not see her nor her NGO on TV as we used to. Some projects which were under construction by her NGO were left hanging and in some cases abandoned. The rest they say is history.

Then came Madam Theresa Kufuor, wife of former President John Kufour. She immediately realized the power she had as First Lady and continued from where the 31st December Women’s Movement left off especially with social intervention programmes. Her NGO, Mother and Child Foundation, was instrumental in the fight against Malaria among children, the six childhood killer diseases, among other initiatives.

In 2007, she used her position as First Lady to push for policy changes in the Government’s white paper on Educational Reforms towards the implementation of UNESCO’s Free Compulsory Universal Basic Education (FCUBE) program for children in kindergarten.

She was seen and heard on a number of media platforms donating to hospitals, women and children. The Mother and Child Foundation evaporated from the media landscape immediately President Kufuor left office in 2009, and little has since been heard of Madam Theresa Kufuor herself as it appears she may be enjoying her time out of the public’s eye in peace.

Then came Mrs. Ernestina Naadu Mills, wife of the late President John Evans Atta Mills. She led a very low profile life as First Lady from 2009 to 2012. Not much was heard of her. Apart from a few news items of her making donations here and there. Her major project was the Ghana First Lady Senior High School (SHS) Students’ Bible Project. The project aimed at encouraging and inspiring students in SHSs across the country to lead moral and responsible lifestyles for national development.

A total of 500,000 Bibles, printed by the Tyndale House Publishers in the United States (USA), at a cost of GH¢10,000, were shared among SHS students by the Scripture Union (SU) Ghana, under her auspices.

Madam Lordina Mahama, wife of former President John Mahama (2012-2017) would pass as perhaps the most visible after Nana Konadu Agyeman-Rawlings. She was First Lady from 2012 to 2017 and President/Founder of the Lordina Foundation.

The Foundation like others before her was (is) an NGO dedicated to the welfare of the underprivileged in Ghana, particularly Orphans and Vulnerable Children (OVC) as well as Women. The Foundation, previously known as Alternative Source of Income Program (ASOIP), over the years embarked on several activities geared towards poverty alleviation, women and youth empowerment, promotion of quality healthcare and support for education.

It has been said that her activities began before she became First Lady, but what is undoubted is the prominence the Foundation came to enjoy because of her position.

In October 2016, a publication by Daily Graphic said that the Lordina Foundation had donated medical equipment, including hospital beds, mattresses, wheelchairs, breathing circuits and consumables to the Asamankese Government Hospital in the Eastern Region.

In August 2014, peacefmonline.com reported that the Lordina Foundation led by Madam Lordina Mahama presented medical equipment to some district hospitals in the southern part of the Volta Region. A simple search on goggle on Lordina Mahama brings up a number of publications about her NGO and its activities.

The current first lady, Rebecca Akufo-Addo has also started on a good note.

Her NGO, Rebecca Foundation, is seen doing great things in the last two and half years. The Foundation according to what is on its website works in partnership with governmental agencies, the private sector, development partners, civil society and non-profit organizations in the execution of its initiatives.

The Foundation assisted the schools for special needs children in Akwapim, supported various children from across the country to undergo urgent medical interventions and has also resourced many orphanages in the country.

The Foundation funded the construction of a community bridge in Zenu, a low income, highly populated community in the Greater Accra Region, and the renovation of a community clinic in Abamkrom in the Central Region. Additionally, The Rebecca Foundation has trained about 200 women in the Eastern and Northern Regions of Ghana in bead making, batik making and entrepreneurship. The Foundation is also helping to improve learning outcomes for Ghanaian children.

There are several publications about the Rebecca Foundation and its activities so far.

The activities of First Ladies are not a Ghana thing. Wives of Presidents playing certain crucial roles in the period of their husbands’ presidency is common around the world. There are even associations of First Ladies which meet occasionally to deliberate on matters of common concern.

In the US, First Ladies have been powerful. In recent memory, Hillary Clinton’s role in Healthcare reform for children and women in the US and how she became a huge political resource for her husband is well documented. Laura Bush, launched the ‘Ready to Read, Ready to Learn’ project which was an education initiative that promoted best practices in early childhood education and raised awareness of innovative teacher training programs. Michelle Obama took on childhood obesity with her ‘Let’s Move’ campaign. She also worked closely with spouses of military officers serving the country in various capacities in the initiative she called ‘Joining Forces.’

However, the question is what happens to these Foundations when their Founders are no more First Ladies? Do they die with their fine ideas and philanthropic works?

In the US, because of the nature of projects they take on, it will be very difficult for them to keep doing the same thing when their husbands leave office as their projects often have policy implications on the country.

In the case of Ghana, where the activities are mostly NGO-like and mainly donations, is it not possible for these Foundations to find ways of remaining relevant even after their husband’s presidency?

So does it mean these Foundations were doing well because they had government support or funding? Or their Founders used their women skills to persuade their husbands to give them some cash to fuel their activities?

There is also the general perception that persons who want favours from the President or government may want to donate to these Foundations of the First Ladies to push their cause by getting the women to whisper a word into their husbands’ ears.

Others also feel that these activities of the First Ladies are used to buy votes for their husbands. For instance, in the run up to the 2016 elections, the then opposition New Patriotic Party (NPP) accused Lordina Mahama and her Foundation of vote buying after pictures of her giving out clothes and washing basins to some women at an event emerged. I am in no doubt similar accusations will be leveled against Rebecca Akufo-Addo and her Foundation ahead of the 2020 elections.

Even though the Office of the First Lady is not recognized in our constitution many have argued that with their enormous contribution to social development there should be a constitutional amendment for the office to be recognized, funds allocated for its activities with proper checks and balances. This way, it will end allegations of corruption and make them accountable to the people of Ghana.

There is no doubt that the activities of these NGOs make phenomenal impact on the lives of their target communities. The 31st December Women’s Movement contributed a lot to education in Ghana and worked to empower women in a way that Ghana never saw before she came on the scene, the Lordina Foundation also made an impact and now the Rebecca Foundation making waves with her focus on health.

Whether we like it or not the First Ladies will always support their husbands to succeed because they are relevant when their husbands are in office. It may therefore be necessary to mainstream their activities so they can be accountable to the people of Ghana.