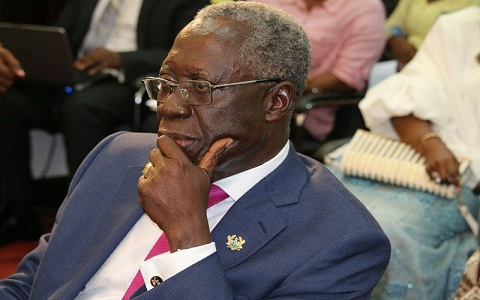 …As Govt  Holds Back Debt Payments To GCNet, West Blue

The name of Senior Minister, Yaw Osafo Marfo, has been on the lips of laid off workers of the Ghana Community Network Limited (GCNet) after one of their colleagues died under very sad circumstances because he could not raise money to pay for his medical bills.

The deceased (name withheld) was expecting his severance package from GCNet to cater for his medical bills but the company says it has no money to pay off any off the laid back workers because the government of Ghana has not paid the company the due settlement and compensation package for the unexpired period of the contract.

The said employee had the shock of his life and immediately fell ill when he was told that he had been laid off and his services would no longer be needed because the company’s valid contract to co-manage the Ghana National Single Window (GNSW) has been abrogated three years ahead of the expiry period.

This worker, as his sickness got worse, continued to make several attempts to get his severance package from GCNet but eventually died as he could not get the money.

He was buried over the weekend and his colleagues started to blame the Office of the Senior Minister for the unpaid severance package to GCNet. They expressed the view that if the government of Ghana had paid the company its compensation, the dead colleague would have received his severance package and be able to use some for his medical bills.

Another section of the laid off workers were of the view that the Senior Minister, who played a key role in pushing out GCNet and West Blue should employ the same passion he used in bringing in Nick Danso’s Ghana Link/UNIPASS-ICUMS, to ensure that the appropriate compensation and settlement packages are paid.

“If Yaw Osafo-Marfo had not insisted that abrogating the contract of GCNet was the best thing to do, all this wahala would have been avoided. Even after taking the contract from the two companies, he has not used the same energy to ensure they are paid the debts owed them. This is why we are blaming him for the hardships we are going through”, one of the laid off workers opined.

Considering the value of the unexpired period of GCNet’s contract, the investment into systems and physical structures, an estimated $120 million would be paid to the company.

West Blue is also on the neck of government demanding payments for huge amounts owed the company by government.

The Ghana Revenue Authority (GRA) and the Ministry of Finance has been having tensed meetings on when the amount would be paid to West Blue.

Meanwhile, the gains Ghana made under the GNSW and paperless ports systems have been eroded under the new ports managers; Nick Danso’s Ghana Link/UNIPASS-ICUMS

The said laid-off workers of GCNet, numbering a little over one hundred breadwinners, are in a fierce battle with GCNet to demand their compensation but the company says it is waiting for its settlement package from government.

GCNet still has a contract with the Registrar General’s Department (RGD) where built, installed and manages the Department’s digital and paperless ‘E-Registrar’ platform; an electronic system that facilitates registrations.

The remaining few workers of GCNet were works on the ‘E-Registrar’, recently embarked on a sit-down-strike action in solidarity with their former colleagues who were laid off without any form of compensation.

This strike led to a shutdown of the ‘E-Registrar’ and the RGD was simply unable to attend to clients who had money in hand ready to pay.

Jemima Oware,  the Registrar-General, had put on record that for each day the GCNet workers were on strike, the government of Ghana losses revenue of amounts between GHC300, 000 and GHC500, 000.

“All our offices since we are not working and have not been able to make payments for any of our services because our services are linked up to this electronic system…We are not able to process transactions and we were registering as many as 200 companies a day but now since last week Friday, we have absolutely nothing to do”, Mrs. Jemima Oware noted.