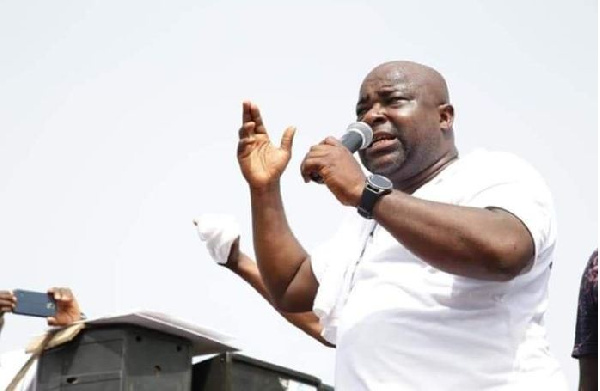 The Chief Executive of the Ghana Free Zones Authority, Michael Okyere Baafi is flouting an order by the New Patriotic Party that individual members of the party who are nursing ambitions to contest in the party’s 2019 parliamentary primaries to desist from campaigning until the party opens nominations and sets out guidelines for the primaries.

In a statement released on November 12, 2018 and signed by the NPP General Secretary, John Boadu said the caution has become necessary following complaints the party has been receiving about the conduct of some prospective parliamentary aspirants who are overtly and covertly campaigning to delegates ahead of the opening of nominations.

According to Mr. Boadu, the conduct of these persons does not only flout the party’s internal regulations but also undermines the very structures of the party particularly at the constituency levels and regional levels.

The statement further said “the party reserves the right to DISQUALIFY any parliamentary aspirant who fails to abide by the rules of engagement. The NPP is a disciplined party and as such, everything is expected to be done in accordance with rules and regulations’’. But Mr. Okyere Baafi is flouting the order by his party.

On April 22, 2019 in the New Juaben South Constituency, some regional executives including the first Vice Chair, Alhaji Omar Bodinga, Regional Communications Officer; David Prah, Charles Nii Teiko Tagoe; a Presidential Staffer and constituency executives of the party, together with Mr. Baafi as well as National Security Operative, Bright Akomea popularly known as ‘’Double” were seen campaigning under the disguise of a “Health Walk” at Koforidua in the Eastern Region.

After the Health Walk, Mr. Baafi launched his campaign and declared his intention to run against the incumbent MP, Mark Assibey Yeboah; this saw Alhaji Omar Bodinga and David Prah equally endorsing his candidature.

They were seen in branded T-Shirts with inscriptions such as “Baafi for 2020”. Some of the constituents who also joined were holding placards with inscriptions “CEO MU CEO, BAAFI 2020 OSOR) B3KASA, THE MAN OF INTEGRITY KOFI BAAFI’’ on it.

All efforts to speak to the General Secretary of the NPP, John Boadu has proven futile but it’s been exactly a week the disguised health walk was held, and it is strange the party is quiet about this or is the party suddenly being selective with its own disciplinary actions. Everyone is waiting and watching the next line of action by the party.