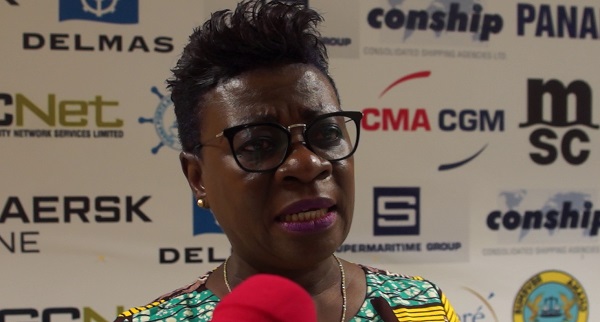 The Chief Executive Officer (CEO) of the Ghana Shippers Authority (GSA), Benonita Bismarck has debunked reports, suggesting that she gave her express permission to her deputy to sign a contract to undertake cargo fumigation exercise at ports.

According to her, a Deputy CEO of the authority, Sylvia Asana Dauda signed an agreement with LCB World Wide to commence the cargo fumigation exercise at the ports without her consent.

It would be recalled, that a cargo fumigation exercise which started some few months ago was ordered to be suspended by the government after importers and exporters complained that the exercise had increased their cost of doing business at the ports

Explaining her side of the story to Citi Business News, Madam Benonita Bismarck maintained that the contract was signed on the first day she reported to work, so she couldn’t have ordered her deputy to sign it.

“I have not given any written consent to anybody to sign. This document was initially signed on the 13th of June, 2017. That was the first day I reported to work, and indeed I did not read the contract, I was not made to read it, so I didn’t even know what it was about, so I couldn’t have given my consent to a document that I didn’t know anything about,” she insisted.

She disclosed that “Subsequently when I was given the document when I asked for it and it was shown to me, I noticed that the date was 23rd June, 2017, but I could remember that it was signed on my first day at work which was the 13th of June 2017”.

According her, upon realizing that the original date has changed on the document, she enquired and was told that it was altered to allow the Director General of the Ghana Health Service to sign since he wasn’t around on the 13th of June, 2018.

“So, I said, by the same token it should have been brought back because I did not sign, because for the GSA, it was signed by the deputy CEO without my consent”.

Madam Bismarck insisted that she had no knowledge of the document on the 13th of June when she first arrived at the authority and had not even received a handing over note at the time.

She recounted that on said day, she saw the former CEO and some officials she couldn’t identify, as well as the deputy CEO sign the contract in her office but she never got an opportunity to see it or know its content.

“So when the exercise started and government stopped it. I called for the document and when I saw its content, I said no. the GSA cannot consent to such a contract because it goes against the very stakeholders we protect, who are the shippers”

She bemoaned reports suggesting that she gave her blessings for the document to be signed, and pointed out that there was no such action.