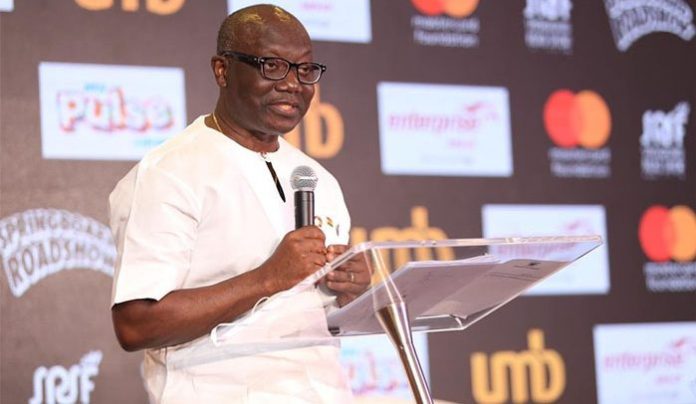 Information reaching DAYBREAK  indicates that Finance Minister, Ken Ofori-Atta has reduced the E-levy rate from the initial 1.75 percent to 1.5 percent.

This occurred on Friday after meeting with the Minority leadership again as part of consultation on the proposal, even though the Minority insists on opposing it, as they want the proposal to be dropped entirely.

Earlier on there was a meeting between the two parties on Thursday, January 27 which ended in a deadlock with both remaining intransigent on their position regarding the proposal.

Initially, the Majority Leader in Parliament, Osei Kyei-Mensah-Bonsu urged all Members of Parliament to make it a priority to partake in the process leading to the passage of the E-levy.

He told the House on Tuesday, January 25, 2022 that further stakeholders’ consultation is ongoing on the proposal hence the inability of the Business Committee program during the first week of the first sitting of the second session.
The Business Committee, he said has programmed the proposal for consideration in the second week after the engagement.

The Suame MP explained the absence of the E-levy proposal on the Order Paper saying. “Mr. Speaker, as Honourable members will recall the House was expected to conclude consideration and passing of the electronic transfer levy bill 2021 by the end of the third meeting for the first session”

According to him “Due to unforeseen circumstances however, the House was unable to consider and pass the bill at the meeting. It was, therefore, the contemplation of the Business Committee that the Bill will be scheduled for consideration by the House during the first week of the first meeting of the second session”.

“However upon consultation with the sponsoring Minister the committee is not unable to program same for this week after her resumption” he added.

The Minister of Finance has been undertaking further engagement with stakeholders and sections of the general public with respect to some concerns that have been raised on the bill.

“The committee, in all probability program the bill for consideration in the second week of this meeting, and honorable members are therefore encouraged to participate fully in the consideration and the process of the passage of the bill.”

The Minority had held the view that policy proposal is a disincentive to the growth of the digital economy.

To that end, their Leader Haruna Iddrisu said, they would not support it.

Speaking at the post-budget budget workshop in Ho on Saturday, November 20, 2021, he said “Mr. Speaker, understandably, we see that the Minister of Finance seeks to introduce some measures including the now popularly declared e-levy or digital as some have quite named it”.

He announced a new levy to be charged by the government in 2022 on all electronic transactions to widen the tax net and rope in the informal sector.

“It is becoming clear there exist enormous potential to increase tax revenues by bringing into the tax bracket, transactions that could be best defined as being undertaken in the ‘informal economy”” Mr. Ofori-Atta observed on Wednesday, November 17 as he presented the 2022 budget statement in Parliament.