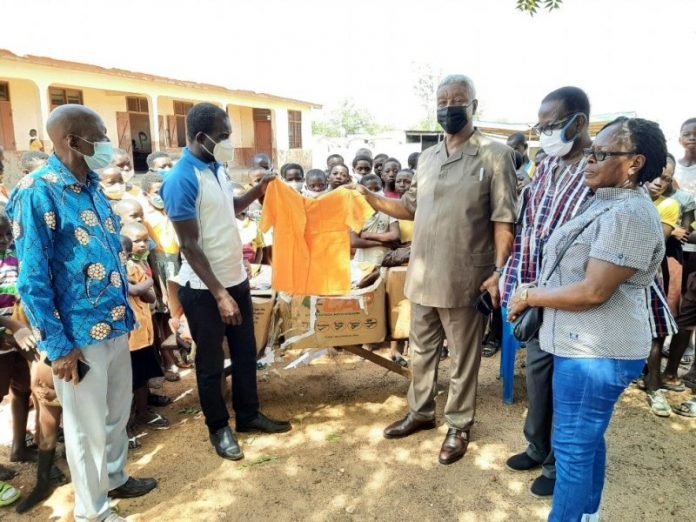 The District Grand Lodge of Ghana-English Constitution, has donated 750 school uniforms to three deprived schools in the Talensi District and Kassena-Nankana Municipality of the Upper East Region.

The beneficiary schools included; the Shia Primary School in the Talensi District, and the Gingabnia and Biu-Sensa Primary Schools in the Kassena-Nankana Municipality.
The gesture was timely as most of the pupils, especially in the Gingabnia and Biu-Sensa Primary Schools did not have school uniforms.
At separate ceremonies on the campuses of the schools to present the uniforms, the District Grandmaster, Right Worshipful Isaac Owulaku Hood, said the organisation was concentrating on distributing the uniforms to female pupils.
“We emphasise on the girl children because we see them as our future mothers. As it is always said, when you educate a boy, you have educated an individual, but if you educate a girl, you have educated a whole nation.”
He noted that most deprived schools were challenged with numerous problems which affected academic activities, “We decided to donate uniforms to these schools to boost the confidence of the children to attend school.”Giving the background and activities of the organisation over the years, the Right Worshipful Hood said the organisation was one of the oldest charitable fraternal organisations in the world with its headquarters in London.He said the larger group was known as the United Grand Lodge of England, emphasizing “We are a charitable organisation, we are not a religion, we don’t practise religion and we are not a political organisation.He said the organisation had over the years supported several institutions across the country including; the Noguchi Medical Research Institute, the Kumasi Centre for Collaborative Research in Tropical Medicine and the Korle-Bu Teaching Hospital among others.Hajia Adisa Emelia Abdulai, the Talensi District Director of the Ghana Education Service who received the uniforms on behalf of the Shia Primary School, thanked the organisation for the gesture.She said some of the girls were brilliant and needed support to encourage them to study and become responsible citizens. “Your intervention has come at the right time,” she noted.Hajia Abdulai said the COVID-19 had affected academic activities, adding that the COVID-19 break resulted in underage marriages and pregnancies among pupils across the District.“Some of the girls are pregnant, some are married. We have about 115 girls who went through these crisis. Only 36 were able to return to school. Some had admissions into Senior High School, but for the fact that they were married or pregnant, or had given birth, they were forced to stay back at home,” she said.At the Gingabnia and Biu-Sensa Primary Schools, authorities expressed gratitude to the organisation for the gesture and appealed for more support for their respective schools.