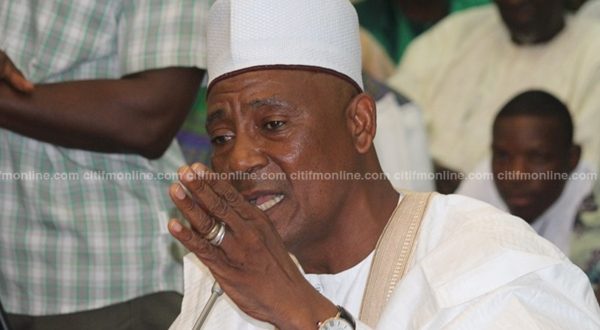 Last week, one of the important and revealing news that trended most was the statement made by Alhaji Boniface Abubakar Siddique, Minister of Inner cities and Zongo Development, to effect that whilst his New Patriotic Party (NPP) was languishing in opposition and suffering political retribution, he was not in opposition nor suffering, because, in his own words, “I always got what I wanted from my brother Baba Kamara.”

In this regard, Alhaji Siddique`s admonition to the residence of the predominantly serene Zongo community of Old Fadama in Accra at a Town Hall meeting organized by GHOneTV, was to prove to his audience, in particular, and Ghanaians, in general, that blood ties (kinship) supersedes any form of socio-political and economic association and fraternity.

For Alhaji Siddique, who was given a Christian and indigenous Guan birth names: Albert Kwadwo Okyerefo Boniface until he “tuba” (converted) to Islam, politicians will always look out for their own blood relations first in political appointments, job opportunities and in the distribution of all public goods, before they consider the national, community and the individual needs of party financiers and foot-soldiers who risked their lives to campaign to bring their parties into power.

What Alhaji Siddique said is no novelty in African politics and to a jolly large extent in our contemporary Ghanaian politics, despite achieving some form of democratic advancements.

As he rightly expatiated, prominent politicians in Ghana under the Fourth Republic had siblings on either sides of the political divide, and always reaped the fruits of governance. In his own words: “Osafo-Maafo is in NPP, but his brother, Kumah Adjei Maafo is in NDC. Sherry Ayitey is NDC but her elder brother, Professor Ayitey is NPP. NDC lawyer, Larry Adjetey is the son of NPP’s Peter Ala Adjetey. Samuel Jinapor is NPP his elder brother John Jinapor is NDC, and then myself I am NPP but my elder brother Kamara is NDC…”

It is quite crystal clear from Alhaji Siddique`s brutally frank averments that behind the façade of politicians pretending to be fighting one another and arousing the morbid interests in their grassroots supporters to join the fray to prove to the voters that they care about the development of the country, in practice what they actually do is to jostle to take reins of state machinery to distribute public goods to benefit themselves, their blood relations; and intra and inter-party cronies.

A phenomenon which came to high ascendancy under John Mahama`s tenure as president, where most of the juicy state contracts went to his brother, Ibrahim Mahama and other siblings, as well as his friends in other political parties (NPP, PNC, CPP and so on).

The end product of using blood ties in allocation and distribution of the public goods, as was observed under ex-President Mahama`s NDC government, was the bleeding of catastrophic corruption and irredeemable incompetence under the period.

Analysis on kinship ties and politics

The evolution human community from its primitive structure into advanced society grappled with vital issues such as the organization of local communities, kinship relations, and the regulation of marriage, residence, inheritance, and succession. In all, kinship is the one which played a very cardinal role in socio-economic and political mobility of individuals in society.

As political anthropologists, rightly argue the extended ties of kinship forms the basis of societies and it has been so for a long time until territorial attachment come to rival blood ties as the basis for social organization. What the territorial attachment did to rival kinship or blood ties was the complete allegiance to social formations or ethnic groups within the state or country. Hence, to adequately comprehend the role of kinship in our national politics, the principles of social contract, which is the legal charter, so to speak, of the kinship system, must be taking into serious consideration.

As explained earlier with the lucid analogy of Alhaji Siddique`s admonition to Old Fadama Zongo residence in the preamble of this article, the kinship system is based on blood relation, but the ties that bind blood relatives are grounded on social contract, i.e., on a public system of rules publicly negotiated.

It is posited that “The history of political ideas begins, in fact, with the assumption that kinship in blood is the sole possible ground of community in political functions; nor is there any of those subversions of feeling, which we term emphatically revolutions, so startling and so complete as the change which is accomplished when some other principle-such as that, for instance, of local contiguity-establishes itself for the first time as the basis of common political action.”

In addition to this explanation, as we could see from Northern Ghana, Ewe, Ga and Islamic Hausa-Fulani Zongo communities, is that fact that the extended patriarchal family group was a unilineal development out of the family and provided the basis for jural order and continuity, since the extended family was a corporation, and this implied persistence in time.

Thus, the family corporation never dies, and in tandem with ancient practices and customs considers the entities with which it deals, i.e. the patriarchal or family groups, as perpetual and inextinguishable. This means every individual in society owes allegiance to every member of the family (corporation) in tandem with social contractual obligations which behoves on them as an integral part of the family.

But some have also argued that kinship principle do not actually guide men’s actions in the societies they functioned. It is rationalized that kinship or blood ties are mere idioms, ways of talking about property interests. The community, some political anthropologists contend, is not defined by kinship, but it is simply a collection of individuals who derive their livelihood from a piece of territory laid out in a particular way.

Boniface Siddique and his kinship politics

Boniface Siddique, has his political ideology from infancy deeply rooted double patriarchal socio-political and socio-religious institutions: his ethnicity as Guan of Gonja extraction from Salaga and practising Muslim. These two institutions and social ideology espoused in assign kinship responsibility to its members in line with their social contract agenda. Thus, for someone like Boniface, his political philosophy as an elite operates on similar kinship principles.

For him, his close family members and those who share ethnic commonality and Islamic religious affinity with him, comes first in his decision-makings before anything else. Alhaji Siddique sees the political and governmental spaces with its overriding consensus by political players as transparent, as an avenue where public system of rules makes it easier for public goods (contracts, projects and policies) to be publicly negotiated to benefit his constituents, especially his blood relations, Gonja political elites and friends who had helped him over the years, as well as some selected Zongo (Muslim) people.

This point can be rationalized from his speech: “I have never seen opposition. My party, the NPP, may have been in opposition but I was not. When the NDC was in power, I always got what I wanted from my brother Baba Kamara and today when he needs anything, I will give to him. So think about this.”

Alhaji Siddique has shown beyond reasonable doubt that politics, for him, was not about political parties and their supporters. This was why when the NDC used political skulduggery to stop him from contesting the Salaga parliamentary seat, he went Independent to win the seat and proceeded to make smooth entry to the NPP following Kufuor`s overtures to certain Independent Parliamentary candidates after 2000 general elections.

He has mission to serve his constituents in line with his kinship ideological principles. The position given to him as the Minister of Inner cities and Zongo Development best serves his interests, and I am sure whoever lobbied and convinced President Nana Addo Dankwa Akufo Addo to select Boniface was privy to his politico-kinship thoughts that made him the best candidate.

Away from the prying eyes of the public, Alhaji Siddique may be seriously working out his kinship politics, which will be at extravagant cost to the NPP, if he is not watched closely. In recent times, a source at Ministry of Fisheries disclosed that if an NPP sympathizer who owned Dumah Farms had not been vigilant and tenacious, Alhaji Siddique would have used his links with the sector Minister to support the existing monopolistic importation of poultry and farming products contract between the ex-president Mahama`s brother, Ibrahim`s Asutsuare Poultry Farms Limited, Ministry of Fisheries, and a foreign supplier.

The owner of Dumah farms, alongside other companies had a contract to import poultry and farming products, but their contracts were abrogated to make Asutsuare Poultry Farms sole importer.

Thus when the political stables changed, owner of Dumah Farms appealed to the foreign supplier company which accepted their right to import.

However, Fisheries Ministries refused to pave way for new contract with Dumah Farms.

Upon checks it came to light that Asutsuare Poultry Farms still had the monopoly and Boniface was the one supporting that move. When Dumah Farms made it known to Boniface that he is also Tampuli, and Ipso facto, a Gonja, he softened his ground and agreed to 50-50 share.

I am told that the foreign interest is not even interested in Asutsuare Poultry Farm again, probably because of how some of Ibrahim`s contracts has been found faulty by the NPP government and are abrogated. The extent to which Boniface wanted to help his fellow Gonja brother, Ibrahim confirms his assertion “When you see us arguing, we are not fighting. When we finish, we go to drink tea and eat meat.”

Boniface Siddue is not alone!

Alhaji Boniface is not the only person in government nor a politician with this kind of kinship politics mind.

It has been the hallmark of our Ghanaian politics since 1992, and kinship ties in political appointments and distribution of public goods has characterized the decisions made from the presidency to the districts. Selection of family, friends, and ethnic and religious affiliates to form government would not have been wrong if right calibre of persons were to be appointed.

Unfortunately, that is not the case at all in our country. Ministers in this current administration have appointed their brothers and sisters to positions they have no intellectual and professional ability to occupy.

Government appointees appoint their close family members to occupy positions which hard working and competent party members and citizens with prerequisite skills should have occupied.

An example in point is the recent appointment of Alhaji Ramadan, former Chairman of PNC as an ambassador.

Is Alhaji Ramadan being appointed because he is the father of the second Lady Samira Bawumia and Abu Ramadan or because he campaigned and financed the NPP?

The mandate that the Ghanaian public gave the NPP and Nana Addo goes beyond the parochial interest of appointing authorities from the presidency to the district assembly. Government is using best intelligent and loyal brains to work for the betterment of the country, not selection of brothers and sisters, aunties and uncles, nephews and nieces, cousins and cross-cousins, fathers and mothers, grandparents, in-laws, boyfriends and girlfriends.

This situation if not checked could lead to John Mahama`s style of governance despite Nana Addo`s genuine intention to make this country the beacon hope for its citizens in Ghana as well as African example of success.