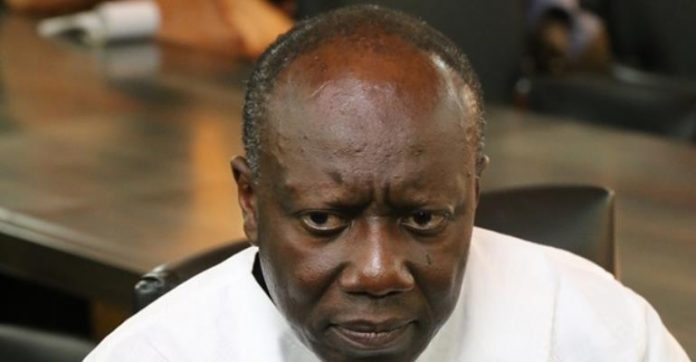 “The challenge is my post-COVID-19 symptoms”, he acknowledged, adding: “It is in the Bible that says: ‘Peter, therefore, was kept in prison, but prayer was made without ceasing for the church and for him and I have felt how God miraculously delivered Peter from prison because the saints prayed for him”.

“The doctors here have been fantastic and very dedicated, but even they acknowledge that there must be someone upstairs who is watching over me because the numbers were so critical. So, thank you, indeed, for your earnest prayers, which have saved me…” These are the words of Ken Ofori-Atta when he was saved from the jaws of death early this year.

He is always in white and quotes the bible like Prophet Nicholas Osei popularly known as Kumchacha yet his heart is not clean and the prostitute who stands at the Togo Embassy roundabout has a cleaner heart than Ken Ofori-Atta, the Minister of Finance & Economic Planning in the Government of Ghana.

For us on the DAYBREAK, we doubt whether Ken Ofori-Atta believes there is God and he is a Christian like he wants the entire nation to believe. He preaches virtue but practice vice.

From driving his father, Jones Ofori-Atta who was the Deputy Minister of Finance in the Busia administration (1969-1972) to teach students at Legon, one would have thought that his background would guide him.

Stories have been told about his tenure at the Achimota School and, especially about how he managed to get into Yale University in the USA.

Those stories will not be repeated here. Kofi Coomson, Publisher of the Ghanaian Chronicle newspaper has written about that period. There are questions about how long he worked for Salomon Brothers and Morgan Stanley, after graduating from university and returning to Ghana.

Everything about Ken Ofori-Atta is about his selfish interest and nothing else. He hates the truth and prefers praise singers to sing his tunes. Kwaku Kwarteng nearly lost his job as Deputy Minister Finance just because he complained about the Ministry becoming an extension of Databank.

People who were sacked from Databank are now advisors and many more. Databank is virtually running the economy of Ghana, together with a few friends who have been given ‘Thank You’ jobs like McKinsey & Company to ‘rip-off’ Ghana.

He is not the President of the land, yet he decides who he can work with and those he cannot, even though the appointing authority has given the appointee the mandate.

He will frustrate and treat you like a ‘nobody’, just because he wants you out. But if you are willing to do his bidding, he holds you in high esteem.

The case of Emmanuel Kofi Nti is there for everyone. Kofi Nti, DAYBREAK is aware, was frustrated and treated with disdain and even though he was still delivering, he was pushed out for Ken Ofori-Atta’s ‘lap-dog’.

Even when the Asantehene stepped in and President Akufo-Addo promised writing the wrong, Ken Ofori-Atta stood his grounds that he cannot work with Mr. Emmanuel Kofi Nti…The rest, as they say, is history.

There is another case of a Kofi Nti around Ofori-Atta’s neck again.

DAYBREAK is aware of party financers who are out of business thanks to Ken Ofori-Atta.

As expected, Ofori-Atta, in his white attire, would deny victimizing anyone; but he has forgotten he does not operate alone as his choir members sing like cannery birds, with many showing clear signs of not being happy, but still not wanting to incur his wrath.

Mention the plans to sack Colonel Damoah…And Ofori-Atta is there as the champion. Mention the Ghana Revenue Authority lands at Airport Residential and Ofori-Atta’s name would not be omitted in the discussion. Mention the contract with McKinsey & Company and you are sure to hear the name of Ofori –Atta. Mention Earl Ofori-Atta and the Ministry of Works and Housing, embodied in Ofori-Atta, has imprints there, too.

Strangely, what we on the DAYBREAK do not understand is why Ken Ofori Atta, who has experienced the worst of such silly victimizations when he was a private banker, stands so tall and irrepressible.

We believe, however, that only he can best tell his story. Even so, we believe he can still exercise some restraint and not judge wrongly and make innocent persons suffer what they do not deserve because, as Steve Jobs once said, “you can’t connect the dots looking forward; you can only connect them looking backwards. So you have to trust that the dots will somehow connect in your future.”