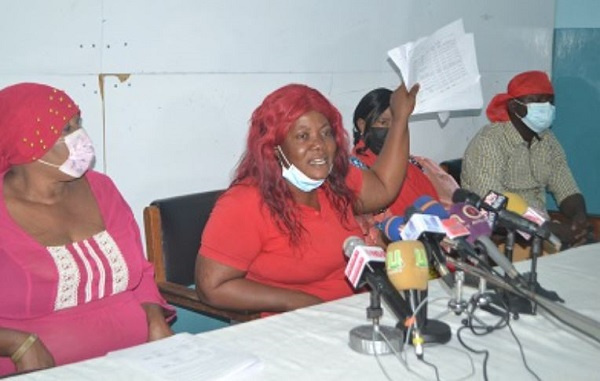 The National Secretariat of the Ghana School Feeding Programme has strongly refuted what it described as false claims by some uninformed caterers who are accusing the programme handlers of paying an amount of 12.9 million Ghana cedis to some so-called 510 ghost schools in the 2019/2020 academic year.

The caterers who claim to be members of the ‘Ghana National School Feeding Caterers Association’ alleged that their independent investigations had led to the uncovering of the alleged ghost schools in all the 16 regions of Ghana.

But, according to the Public Relations Officer of the Ghana School Feeding Programme, Mr. Siiba Alfa, the allegations of ghost schools and payment of money to ghost caterers are utterly false, misguided and misleading.

He said it is a calculated attempt by one Ms. Caroline Aboagye, a caterer in the Central Region who has joined forces with some mischievous elements who are bent on destroying the hard earned reputation of the management of the GSFP.

Ms. Caroline Aboagye who claims to be the PRO of the Ghana National School Feeding Caterers Association at a press conference in Accra fiercely attacked the personality of the National Coordinator of GSFP, Mrs. Gertrude Quashigah.

Describing management of GSFP as corrupt, Ms. Caroline Aboagye commissioned her rented followers to chant and wield placards some of which read: “Stop the Widows Appointment”, “School feeding not for Voltarians”, “Thank you Mr. President for 1st term payment”, “Quashigah and all her directors at national and regional level must go”.

But Mr. Siiba Alfa expressed disappointment about the indecent name calling and tribal bigotry by Ms. Aboagye and her group against Mrs. Gertrude Quashigah, whom he said remains a motherly figure to all staff and caterers under the programme.

Reacting to the call on President Akufo-Addo by Ms. Aboagye to remove the GSFP National Coordinator together with all other national and regional staff of the programme over allegations of corruption, Mr. Siiba Alfa insisted that the allegations from Ms. Caroline Aboagye clearly attest to how ill-informed she is about the operations of school feeding programme.

According to him, the GSFP just as any other agency of the Government undergoes regular audits from the appropriate state institutions and that the Secretariat had never been implicated since the assumption of office of Mrs. Quashigah.

“We have a very transparent payment process that conforms to standard public financial procedures. Thus, the feeding aspect of the programme has a separate account, which is lodged at the Bank of Ghana in the name of the Ministry of Gender, Children and Social Protection (MoGCSP). The National Secretariat of GSFP only facilitates payment by coordinating the process which involves the Ministry of Finance, Controller and Accountant General’s Department, Ministry of Gender, Children and Social Protection and finally, the Ghana Interbank Payment and Settlement Systems (GhIPSS) which electronically transfers the feeding grants to caterers on their e-zwich cards”.

Mr. Siiba Alfa added that the National Secretariat of GSFP does not see, touch or disburse feeding grants; and it is therefore extremely difficult, if not impossible, for the GSFP leadership to divert funds meant for feeding to be used for private gains.

He therefore challenged Ms. Caroline Aboagye to come out with evidence of the alleged payment of 12.9 million cedis to non-existing caterers, provide the account details of those caterers and how much they received individually.

According to him, “It is not just enough for those making these allegations to spew debris without further and better particulars to authenticate their claims”.

He insisted that the current leadership of GSFP is NOT corrupt or incompetent. The PRO touted that for the first time in the history of school feeding programme, the management was able to make savings of over 27 million Ghana cedis from non-cooking days in the 1st term of this 2021 academic year and the money duly declared to the appropriate authorities.

He also talked about the many changes and initiatives carried out by the current GSFP leadership which include the practical nutrition and innovation training for all caterers and head cooks across Ghana; increase in beneficiary pupils from 1.6 million in 2016 to 3.4 million; employed 10,850 caterers working in 10,832 schools in all the 260 districts; development of GSFP bill; development of new GSFP operational manual and the digitization of GSFP monitoring system among others.

Mr. Siiba Alfa wondered why Ms. Caroline Aboagye could not at least appreciate a single achievement of the National Coordinator but was rather interested in accusing her falsely.

In the recent payment of the 1st term arrears, Ms. Caroline Aboagye insisted on the GSFP Secretariat to pay some new schools she has forcibly allocated to herself, but the secretariat could not agree to pay her for those new schools which are not on their payment file.

All these and more, coupled with her bitterness against the current management of the GSFP led her to manufacture these wild allegations.

The GSFP Management says it is ever ready to subject itself to any investigation by the relevant agencies concerning the allegations levelled against the secretariat.