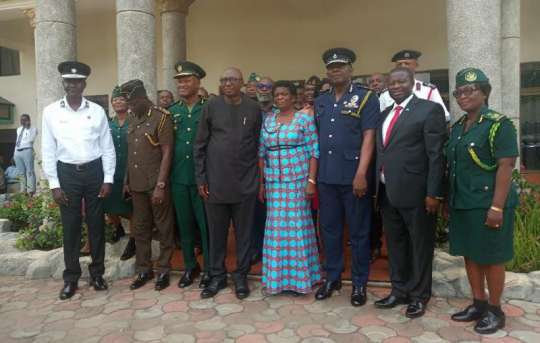 The Ghana Immigration Service in 2018, arrested a total of 544 foreign nationals out of which 123 were residing and working in the country without permit as against 312 arrested in 2017.

This represents 60.58 per cent reduction against the number arrested in 2017.

Mr Ambrose Dery, the Minister for the Interior revealed this on Wednesday at the 2018 Annual Review Meeting of the Ministry in Accra.

“The reduction of arrests made within the period he said could be attributed to the intensified public education on compliance of GIS laws carried out by Service in the preceding years,”

He said it was prudent for all departments, agencies under the Ministry to take stock of their performance as a Sector during the period under review.

He noted that the Ghana Prison Service was providing both formal and informal training to the inmates to enable the prisoners acquire skills that would help them earn decent income upon their discharge from prisons to reduce recidivism.

He said the reduction in recidivism (re-offending) was 4.5 per cent as against the 4.0 per cent recorded in 2017.

“To effectively monitor the country and ensure peace and security, the Ghana Police Service has installed CCTV cameras in some critical areas in Accra and in 20 Police Stations across the country,” he stated.

Mr Dery said the Service has further intensified the mobile patrols in the communities following receipt of 30 Double cabin-pickups and 65 motorbikes from the Government to combat motorbikes menace in the country.

He said five Police stations had also been automated; “they have migrated from analogue to digital system”.

In 2018, the National Commission on Small Arms and Light Weapons (NCSALW) collected 2,892 illicit weapons for destruction; stating that this would, to some extent, control crime and conflicts in the country.

The Narcotics Control Board the Minister said recorded 16 cases of drug trafficking and abuse, arrested 25 persons who were processed for court with two convictions with the remaining pending trial.

He said the Board had conducted 48 interviews to determine refugee status and 162 cases made up of 285 individuals were adjudicated.

He noted that the Gaming Commission of Ghana in collaboration with the Customs Division of Ghana Revenue Authority seized and destroyed 106 gaming machines at the Tema Port.

He said together with the Ghana Police Service, the Commission had seized a total of 121 illegal slot machines from the Western and Central Region and closed down three casinos illegally operating at Wassa Akropong.

“Ghana can only continue to enjoy accelerated socio-economic development and attract local and foreign investors, when premium is placed on the protection of human life and property, peace and security.

“It is therefore important to assure the citizenry and investors of the peace, security and safety of their valuable investment from the ravages of fires, floods and other disasters.”

He urged all agencies and departments under his ministry to be vigilant, share relevant information amongst them and also collaborate effectively with each other to deliver their respective mandates as well as the Sector’s mandate.

“We ought to build on our past achievements, which means, we must together work harder this year to attain greater heights,” he said.

Mrs Adelaide Anno-Kumi, Chief Director for the Ministry of the Interior said the review meeting would provide them with the opportunity to discuss the challenges encountered during the year under review and how best to overcome the challenges that might come their way during the execution of their plans for the year 2019.

In attendance was Mr David Asante-Apeatu, the Inspector General of Police.