Home In The Barracks Air Force Chief Dragged To Court 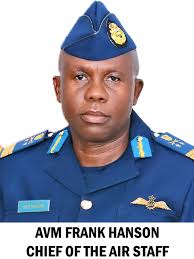 An Accra High Court has set July 9 to hear an application for contempt brought against Air Vice-Marshal Frank Hanson, the Chief of Air Staff.

Lawyers of the Applicant, NASTEC Ghana Limited want the court to jail the Chief of Air Staff for breaching the orders of the court.

The two are currently locked up in a legal battle over a parcel of land, a case that is currently pending the court.

It may be recalled that the court presided over by Justice Jennifer Anne Myers Ahmed in a ruling dated May 18, 2020 ordered all parties in the instant case to stay clear off the land under litigation until the determination of the matter.

It said “it is therefore ordered that all parties, workmen, servants, privies and assigns are restrained from any interference with the land the subject matter of dispute pending the final determination of this suit”.

However, Oasis Law Office and Consult, lawyers for the Plaintiff are back in court urging the court to imprison the Respondent for “having behaved and acted in such a manner as to interfere with the administration of justice and for having shown utter disrespect to this Honourable Court.”

A 15-paragraph affidavit in support of the motion stated among others that the Respondents who have the penchant for using armed soldiers to intimidate the plaintiff on the land cannot be prevented from their illegal acts in any other legitimate way unless the cohesive powers of the Honourable court are invoked.

It further argued that the posture of the Respondents is aimed at nothing but to interfere with the administration of justice.

The affidavit in support of the motion stated that the Respondents have behaved and acted and still behaving and acting in such a manner to show utter disrespect for the court  and so they deserve to be committed for contempt of court and sent to prison.

Meanwhile, the Attorney-General has filed its affidavit in opposition to the motion for contempt.