Home Opinion Kokromoti We do not need new regions and districts 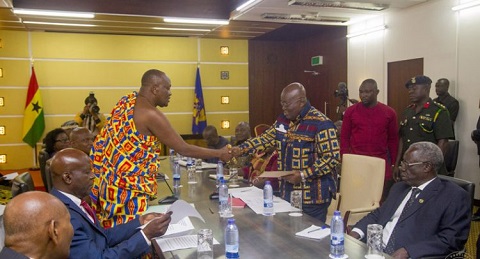 “Africa has had too few enlightened leaders of the right kind. Africa needs courageous, persistent and compassionate leaders who will tap into the continent’s vitality to create better future. The continent’s development will not come from a single leader but from a collective groundswell of change and transformation.

The growing young population must be offered the opportunity of employment. We need to build strong businesses and strong civil societies to hold governments to their promises to the people”. – Busumuru Kofi Annan

In the decision policy to establish more regions, we appear to be enthused with quantity rather than quality. The concept is that the creation or more regions will ensure the equitable spread of the national resources. Wrong.

Unless we can convince ourselves that the creation of more regions will lead to automatic increase in national resources, it will amount to the sharing of the same existing resources spread around the same country but in more bits and pieces which could lead to waste as no region will have enough to embark on any meaningful capital development projects.

Past examples do not appear to teach us any lessons. Many of the extra-time district assemblies created during John Agyekum Kufuor NPP administration still do not have completed functional meeting places for assembly members or official residential facilities for DCEs almost ten years along the line.

Let us take the case of the Akyim enclave as example. We have Akyim Abuakwa with Kyebi as the capital, Akyim Kotoku with Oda as the capital and Akyim Bosome with Swedru as the capital. Currently the three towns belong to three different district and municipal assembles, thanks to the creation of additional district for the area during John Agyekum Kufuor NPP administration.

The distance between Akyim Oda and Akyim Swedru is barely three kilometers with a road linking the two district capitals. That three kilometer road is among one of the worse roads you can find in this country with massive potholes. The carving of a new district did not bring development to that road with its attendant economic benefit to the people of the area.

Yet the area has produced some of the most illustrious and powerful politicians in this country from all the political divide since the time of Kwame Nkrumah.

The rampart parking of articulator trucks in towns and villages on our highways (classical example the parking of articulator trucks on Accra end of the Nkawkaw dual carriage way), the undignified and illegal development of markets in towns and villages located along our highways (classical example, Kasoa, Mankessim and the Sunday market inside Ejusu town along the Kumasi-Accra highway) causing unnecessary traffic jams, complete nuisance and avoidable accidents all point to one fact.

The wrong kind without any vision and business acumen are appointed into positions as DCEs and MCE and elected as Presiding Members and Members of Parliament who most of the time spend more time holding each other’s throats trying to compete to corner for themselves the resources meant for the development of their constituencies.

These square pegs in round holes do not see the potential economic and financial benefits of constructing car parks and markets with modern amenities like wash rooms, guest houses where affordable fees can be charged to bring in revenue for development.

The issue of decentralisation and grassroots democracy is laughable and should not be raised as argument in support for the creation of more regions. Very often the big shots in Accra decide what is good for the people in the hinterland.

Useless projects and machineries are dumped on the districts by the central government in Accra without any consultation and the cost of these wanton waste is deducted at source for the districts share of the nation’s resources.

The result is that there is a complete rip off and the final contractor does not have the luxury of the full contract price to do a decent job.

A classical example was a GETFund financed project for the construction of a six room primary school for Adansi Brofoyedru some ten years back.

When there was no progress on the work, I made a lot of noise in this column until it became too uncomfortable for the contractor chief who passed on the contract to another minor chief.

The creation of new districts and the resultant electoral constituencies have not brought any development and growth to the people. It rather resulted in the purchasing of sub-standard furniture from China to furnish our parliament.

The nation lost and some greedy individuals benefitted. During the first Parliament of the “Fourth Republic”, a survey conducted indicated that throughout the life of that parliament, 40% of the parliamentarians never made any contributions on the floor of parliament.

Money which could have been used to provide research assistants, office accommodation and other resources to help the hardworking parliamentarians among them perform were wasted on increased salaries, excessive foreign travels and ex-gratia awards for increased number of parliamentarians whose worth in gold to the nation could not be measured.

It will help this nation if the government should direct its attention to resourcing and raising the image of the National Development Planning Commission to make it relevant to the nation than creating new regions and districts. Creating new regions make political sense but not economic and developmental sense if as a nation we should continue to be governed by our warped brains.

Of course, the current Minister for Economic Planning should perfectly understand the point I am making since he was once dumped at that place of what has become the Siberia for discarded politicians and public servants.