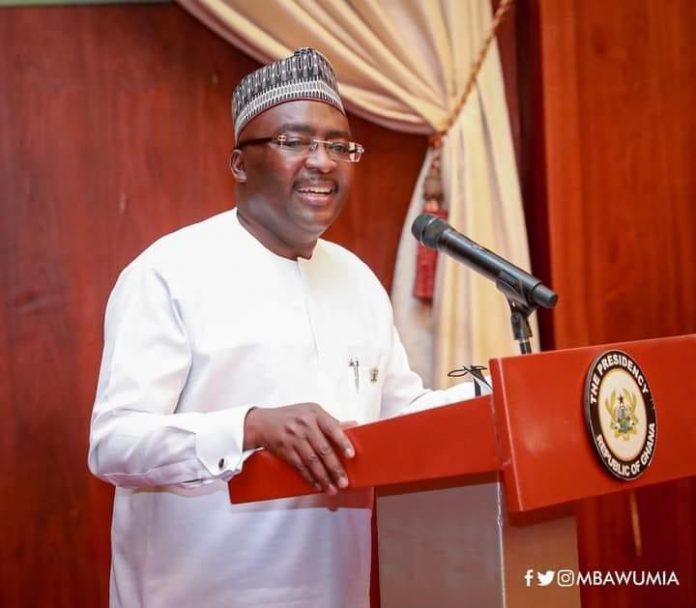 It is extremely difficult trying to write about the contributions of His Excellency Alhaji Dr. Mahamudu Bawumia, Vice President of the Republic of Ghana to the economic and democratic development of Ghana. One stands the risk of writing volumes given the versatility of the astute economist and politician. The writer’s first dilemma is to answer the question: which area should I start with?  Going by his training and practice, many expected Dr. Bawumia to focus exclusively on economic issues. On the contrary, and quite logically, Dr. Bawumia takes a whole systems approach to governance, development, and prosperity. In this approach, he has advocated and championed pioneering innovations focused on transforming our economic and democratic structures fundamentally. The achievements have been breathtaking in scale.

Years ago it looked as if issues about the economy were shrouded in secrecy, on something requiring major honours in nautical science to appreciate growth indicators and what that means for incomes, livelihoods and prosperity. Enter Dr. Bawumia, who is both determined and efficient! He has an exceptional skill to break down complex economic issues that hitherto made sense to only some select few. He does this efficiently and with some heavy dose of wit and humour to boot. “If a trader thinks in dollars and prices in Cedis, how would you know?” This teaser by his Excellency Dr. Bawumia in March 2014 changed the debates around exchange rates and the performance of the Cedi. He is credited with demystifying this debate and putting it on the front burner, enabling market women, farmers, head porters and other professionals to appreciate the connection of the Forex debate with everyday living. Citizens need their governments to deal with the real problems confronting them, which is what politics and governance should be about actually.  Whilst at it, it is fair to say that the Cedi’s best performance in the 4th Republic happened under his watch as head of the Economic Management Team.

HE Dr. Bawumia is clearly ahead of time.  His digital revolution was launched with the mental preparation of a meticulous IT icon. Though he has not been trained as one, he has spearheaded digital and technology interventions in all facets of national life. From banking, property addresses, healthcare, agriculture, commerce, you name them, he has led digital work schemes needed to enable Ghana become efficient internally and competitive in the global space.  This is another brilliant chapter in Dr. Bawumia’s story of renewal for the Ghanaian society. Some NPP faithful refer to him as an ‘economic prophet’ but it is now apparent that this descriptor requires urgent expansion. The Covid-19 pandemic has clearly shown that we cannot afford to ignore the need to leapfrog on technology. The pandemic has vindicated Dr. Bawumia. I need not remind readers that technology and digital platforms are increasingly used by financial service providers to serve customers better and detect fraud, and by healthcare providers in many areas of their operations.

At the start of his digital campaigns, he was mocked and called names by members of the opposition National Democratic Congress.  This grew louder when he launched the universal QR code and proceeded to purchase Waakye with it. It still defies reasoning that a party that touts it social democratic credentials will have issues with attempts to distill down to the level of the masses.  Readers will recall the brouhaha that surrounded the launch of the GhanaPost GPS. His Excellency John Dramani Mahama joined the crucifix bastardizing the whole project as a total waste of national resources and time. Even to the uninitiated, property addressing systems clearly offers enormous benefits across broad sectors of the national economy. As fate would have it, HE John Dramani Mahama recently filed an election petition with the Supreme Court of Ghana with his digital address GL-128-5622 boldly displayed.  Dr. Bawumia has always shamed his critics, leaving them an embarrassing distance behind. His technology and digital sermons were dismissed as copying, then downplayed and eventually acknowledged. As technology deployment becomes embedded in Ghana, it will not only benefit businesses and public sector agencies, but it will also have significant economic and social effects on citizens.

His Excellency the Vice President is a man of many parts. He was ushered into the political and governance space of his country taking cognizance of his vast technical and professional experience. But many people also saw in him a political novice and wondered whether he could have any impact on the party especially with the presence of a malicious political opponent that shamelessly deploys propaganda and subterfuge to achieve political ends. Being an intelligent and determined personality, Dr. Bawumia easily adjusted and became the arrowhead of successive NPP electoral campaigns culminating into two electoral victories, one in opposition and the other an important second term mandate.    Perhaps it was not for nothing that Dr. Bawumia became the subject of harsh jokes and mudslinging perpetuated by the NDC over the years as if he was the ONLY person in the government. The NDC’s official policy, it would seem was, when in doubt, blame Dr. Bawumia.

Unbeknownst to many people Dr. Bawumia’s had earlier made significant and groundbreaking contributions to the government of His Excellency President John Agyekum Kufour contrary to the untenable claims by some opponents that he is a new contributor to the NPP. Kufour appointed him to the important office of Deputy Governor of the Bank of Ghana in June 2006 and he reciprocated by delivering and excelling on macroprudential policy. He led efforts in the redenomination of the Ghana Cedi that had far reaching implications for fiscal stability and economic growth.  Evidence abounds that during his days at the BOG interest rates were managed efficiently spurring investors to take extra risks in search of larger returns. It was during this period that the banking environment also witnessed a massive transformation anchored on well capitalised banks and an accompanying vast branch network making significant contributions to financial inclusion. Dr. Bawumia worked with others, leading in most cases, to diffuse risks in what may be considered sophisticated markets which ultimately contributed to a resilient financial system in the Kufour led NPP Government. His Excellency Dr. Alhaji Mahamudu Bawumia’s contributions to the success of the NPP’s economic miracles have thus been well chronicled.

HE Dr Bawumia has thus grown into an influential and very important party man combining technical delivery of critical governance and national matters with equally important party-promoting strategies and actions.  For me, since “you and I were not there” days, Dr Bawumia has come to represent an image in the party you can trust – astute, incorruptible, hardworking, meticulous, and non-partisan.  He is the first Vice President to be openly, deeply and directly involved in working with his President to vision, develop and deliver on party ideals for transformative change. He has never been marginalised and has been very visible as leader of the Economic Management Team, sometimes, in a hands-on manner going down to the level of civil servants, all in pursuit of results for party and country. He is gifted with the very strengths that many politicians lack: an ability to re-energize government institutions and services, a broad interest in public policy, and an impressive command of detail. He has done all these without seeking praise. Whatever his President has promised to do, he has stepped in to ensure effective, efficient delivery. Against this background, he is not Machiavellian in his approach- not ganging up for influence, favour or power.

Dr. Bawumia has shaken the frontiers of political engagement in the country. Even in his humorous best he essentially ensures that campaigns and debates are issue-based. He has often found simple and witty ways to repel the mischief and propaganda of the NDC. His “chalie wote to boot’ response to President Mahama’s boot to boot campaign was one of the many subtle punches that kept a vicious opposition at bay and also endeared him to many neutrals and technocrats.  The NPP should do well to leverage on the benefits of this influence. It is to their advantage to try to sway the Ghanaian voter to concentrate on the many issues that require attention, which happily the party is addressing.

Over the past 4 years, the party has revolutionized agriculture through Planting for Food and Jobs.  The party has offered livelihoods and skills development opportunities to thousands of young people through NABCO.  The NPP is extending the road network across the country; it is investing in education and health care. This list is endless. The overarching goal is to boost the economy and alleviate poverty. His Excellency, Alhaji Dr. Mahamudu Bawumia has been at the forefront of these.

Every party needs a Dr. Bawumia as its leader!!!!!