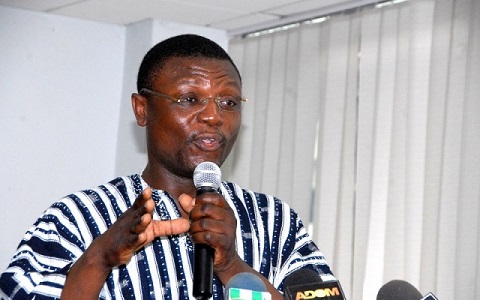 National Organizer of the opposition National Democratic Congress (NDC) has cautioned Flagbearer hopefuls of the party to desist from the campaign of running down former President John Mahama for their parochial political gains.

According to him, such politicking is unhealthy for party cohesion especially at a time to NDC is putting itself together to stage a strong comeback to power in 2020.

The largest opposition party is set to go to Congress later this year to elect its Presidential candidate for the 2020 elections. But already some interested persons have already hit the ground running campaigning to be elected to that enviable position.

Mr Mahama has been severally criticized by some of his own party members, accusing him of being a bad leader whose actions and inactions were one of the major contributory factors to the NDC humiliating defeat in the last general election.

One of such hopefuls, Alban Bagbin, who is the Second Deputy Speaker of Parliament has accused Former President Mahama of being responsible for the defeat of the NDC in the 2016 elections.

“We gave him [Mr Mahama] the opportunity and we saw the end results – we lost with a record over one million votes,” the former Majority Leader said.

But speaking to Nana Aba Anamoah on State of Affairs on GHOne TV, Mr Kofi Adams who was the NDC 2016 election Campaign Manager stated that the fact that Mr Mahama led the party to a defeat doesn’t make him a bad leader.

“A player might miss a penalty that will determine whether his team is moving forward or getting out of a competition but that does not mean that that player is out, the fact that your best player misses a penalty doesn’t make that player the worse player. So the fact that John Dramani Mahama led the party and we lost an election doesn’t make him all of a sudden the worst person. Great players have lost penalties that would have determined the fate of their teams, it doesn’t take away the fact that they’re great players. They field them in subsequent matches or sometimes another penalty comes, they put them in and they score.”

He continued: “So this analogy that he’s lost an election so that makes him bad, they should go and tell that to the marines. They should stop that type of campaigning, let us encourage and motivate our people. We’re doing a re-registration, there are challenges on the ground, despite all these challenges make sure that you do your best to resolve them. This is not the time to go and say John Mahama has done this, Asiedu Nketia has done this, Kofi Adams has done this, and this one has done this, it is not helping the party.” Adams fumed.