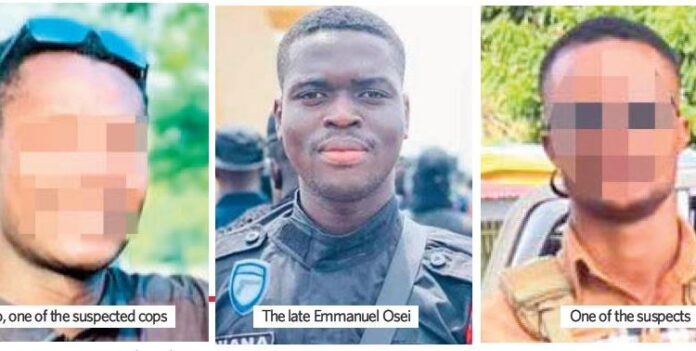 The country yesterday woke up to report per police press release that two policemen Numbers 53549 L/Cpl Stephen Nyame and 58284 Constable Reindolph Gyimah Ansah aka Pablo who were being held for a crime died.

The suspect policemen were under investigation in connection with alleged bullion van robberies in Accra.

According to the release, they sustained gunshot injuries at Borteyman near Ashaiman during intelligence led operations by investigators.

Tongues started wagging across the country and several questions are being raised as to the mode of operation to warrant the high risk suspects sent to the location.

A cross section of the public would not take the explanation offered by the police but suspected that they were ‘dispatched’.

The next concern was why, was it to conceal the identities of other members of the policemen bullion robbery syndicate.

Meanwhile the Circuit Court in Accra has remanded in custody five suspects in the bullion vans robberies.