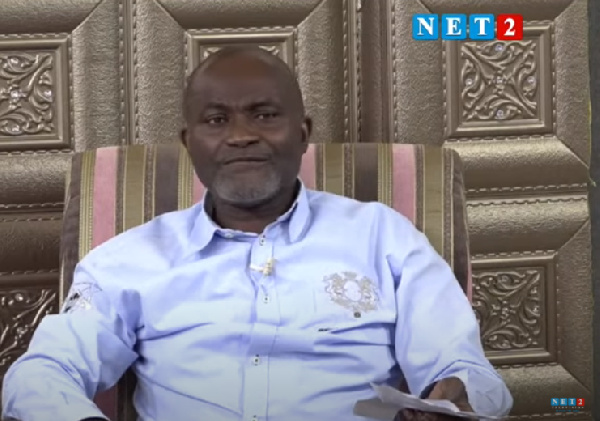 Kennedy Ohene Agyapong, Assin Central MP has issued a strong warning to the National Chairman of the Lands Commission, Stephen Ntim, over some irregularities regarding the sale of lands in the country.

Speaking Monday on Net 2 TV monitored by GhanaWeb, the MP indicated that some members of his party have alleged that authorities of the Lands Commission were grabbing and selling lands among NPP members and loyalists.

Agyapong narrated that the Lands Commission came to call some reporters from Net 2 TV to Kwabenya so that they could witness the demolition of a project of one Gedo who was building a Shopping Mall in that area.

He disclosed that the journalists were assaulted and later arrested and taken to the Kwabenya Police Station.

“Finally, they arrived at Aviation lands and they asked him [Gedo] to build a house for the Lands Commission and then they gave him 140 acres of land of which 10 acres were [sic] given to him [Kennedy Agyapong] under [the] erstwhile NDC administration but since [the] NPP came into office they have distributed the land among themselves,” Agyapong alleged.

Agyapong added that one Alhaji at the Commission later gave him some paper to sign and when he asked further, he was told that it was a paper for two acres of land.

“So, I asked two acres for what and he responded Aviation and I asked if they have [sic] looted and shared the property they should keep it…the same way that NPP are sharing lands, NDC will do the same thing,” he stressed.

On Stephen Ntim, the Chairman of the Lands Commission, Kennedy Agyapong indicated that he would frustrate Ntim’s ambition to become NPP national chairperson.

He averred that Ntim promised him a piece of land at CSIR.

“I have made all the necessary payments with receipts. Because of the way I am, I don’t want any trouble. They called me one day to say that the land belongs to CSIR so they won’t give the land to me. The best thing anybody will do is to return my money but Ntim told me point blank that I should go round and look for a similar land as a replacement.”