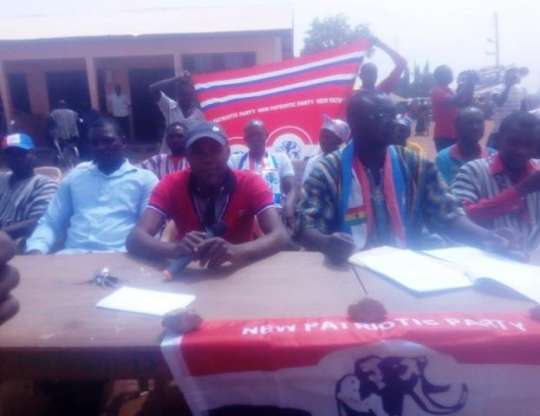 The allegations levelled against her involved lack of leadership skills and respect for NPP party members, misuse of assembly resources and establishment of parallel constituency executive committee retarding development of the Municipality.

The Coalition Spokesperson Mr Gerald Kansoh said at a News conference in Jirapa that since April 2018 to date, the Assembly had not had any session and its composite budget and annual plan for the year 2019 approved.

The group feared “actions and inactions” of the MCE could automatically lead the Constituency parliamentary seat being maintained by the National Democratic Congress (NDC) in 2020, if immediate steps were not taken.

They therefore demanded President Akufo-Addo to remove Madam Christine from office else members of the party would be pressured to “resort to different action” which might not be “palatable to the party”.

He also alleged that the Assembly could not point out to any project in the Municipality from the Internally Generated Fund (IGF) because fee fixing resolution had not been passed and no approval fees, charges and levies to be collected.

He warned some regional party bigwigs to stop interfering in the constituency’s political activities as it could affect the fortunes of the party in the next general elections.

The Coalition also condemned government appointees of assembly members for looking unconcerned, while the MCE was failing the party in the constituency they were working hard to snatch the parliamentary seat.

“Jirapa is a fertile ground for the exponential growth of NPP and with the right MCE, we can capture the parliamentary seat which is currently being occupied by NDC and increase our presidential ballots,” he added.

It would be recalled in May 2018, the Jirapa Traditional Council had to broker peaceful resolution in an impasse in which some Assembly members initiated a process seeking to impeach the MCE, following similar allegations of misappropriation.

But Madam Christine has vehemently denied any wrongdoing.