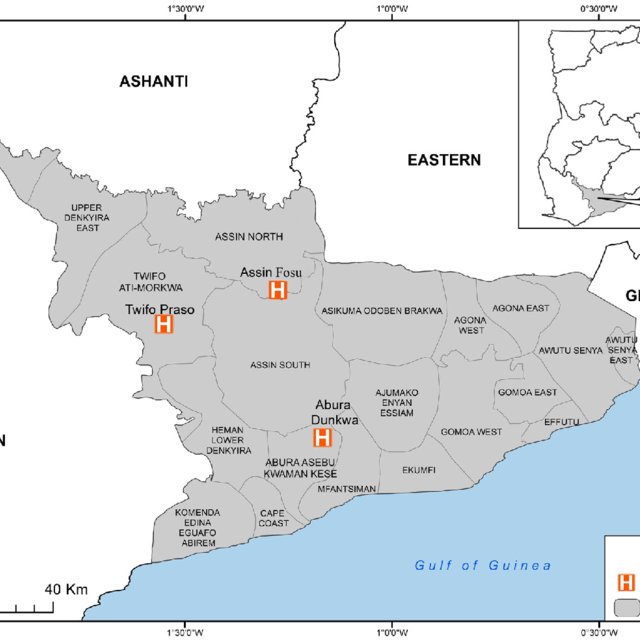 Twifu (Twifo) is the combination of the aboriginal agro-forestry Etsi and the Akan Twi-speaking people found in the Central Region of Ghana.

Twifo State roughly runs south to Mampong (the seat of the Twifo Omanhene) while the left-hand branch runs northwest to the town of Buabin and the right-hand branch runs parallel to River Pra until it reaches the Asante frontier. On the south, the Twifo state is bounded by Hemang, on the west by Wassaw Amenfi, on the north by the Abuakwa Division of Denkyira, and on the east by Assin Attandanso.

Twifo traditions provide two main conflicting accounts about their origin and migration across the Pra River to their present jurisdiction. F. K. Buah writes that the Twifo oral tradition claims that their ancestors came “from the ground” in the Apagyahina forest, about twenty kilometres south of the present Denkyira town of Dunkwa. Another version maintains that the Twifo migrated from the Bono Kingdom and led to the south by Nana Mfotee Amoa. They first settled at the south of the Offin (Ofe) River. Here, Owusu Koko led the people to Wassa, and from there they later returned to Twifo, their present home on both sides of the Pra River, having settled some time at Abrem. Mokwaa oral tradition asserts that Owusu Koko’s large retinue was provided land by the then Mokwaahene Nana Krom Banti. The Twifo founded towns such as Gyase, Bepoben, Amanpona, Moseaso, Aboabo, Nyinase, Daaman, Tufoi, and Agona.

When the Twifo settled at their present location, they met three groups of aboriginal Etsi settlers, Mokwaa, Hemang, and Afutuakwa. Because these Aboriginals live in scattered settlements, the more powerful Akan Twifo migrants were able to reduce them into vassal states. Buah (1980:13) contends that this seems to be supported by the assertion that the Twifohene sat on a fire grate made of three cornerstones {mbukyia-miensa) or Triple alliance comprising these three minor states at the time. This alliance that made the novel Twifo state to the account, the alliance was meant to protect the three states against invasion from powerful neighbours such as Wassa (Osei 2020:29).

Twifo-Hemang oral tradition asserts that they are Aduana-Abrade clans’ men who came from the Bono/Banda. The first built a settlement at Dwenemu near Diabaakrom. From Dwenemu, Nana Agyen Kokobo led them through Nkonya to their present home where they merge as one people with settlers of Etsi origins. Since the people who came from Kumbu were called Twifo, the two towns, Amanfi and Hemang, which they built became Twifo-Hemang (Opoku 1969:24). This new state became an important and very powerful component of the novel Twifo state. However, dynastic conflict under the reign of the fifth chief led to the disintegration of Hemang. Meyerowitz (1952:98) recorded:

“After the death of their (i.e. the Twifo) fifth king, another stool dispute is reported which resulted in an eastward movement of part of the royal house, together with  a great many followers, under their elected king Otumfour Asare.”

In 1553, Otumfour Asare refused to be placed on the power of the Denkyira State and their King, Nana Owusu Bore (Opoku 1969:17). Thus he fought fiercely with the Denkyira. On this, Reindorf (1895:49) recorded a tradition that ‘Ansa Sasraku of Tshuforo proper’ was defeated by the Denkyira and as a result fled to Asamankese. Upon their defeat by Denkyira, Nana Asare emigrated eastwards with his faction to found the Akwamu Kingdom at Asamankese now in Akyem Abuakwa State, before war forced them to settle at Nyanawase and Akwamufie.

After the fled of the faction led by Nana Asare, the Twifo became the subjects of the powerful Denkyira state. They recovered their independence in 1701 as a result of the Ashanti defeat of Denkyera, in which they participated (Wilks 1958:215).

Reindorf, Carl Christian. History of the Gold Coast and Asante. (Basel: The Author, 1895).