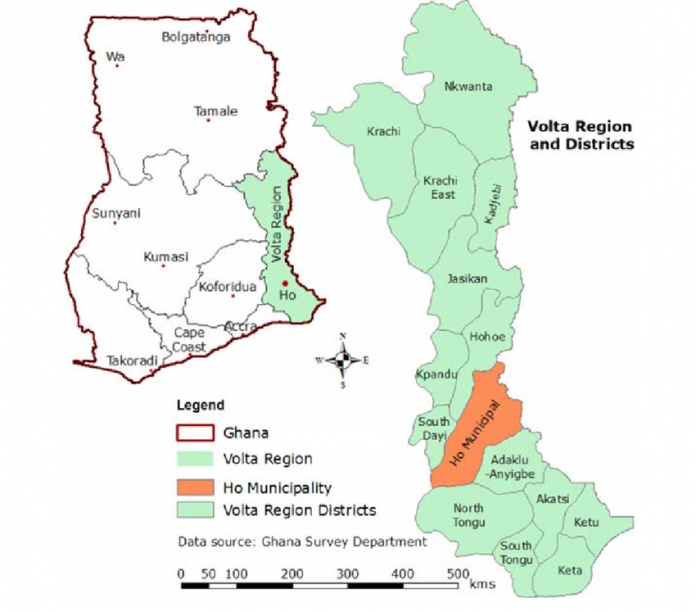 The Nyagbo (Bàtrùgbù) is agroforestry, Guan-Tùtrùgbu speaking people residing on the mountainous Afadzato South (Afadzato Anyigbe) District of the Volta Region of South-eastern Ghana. The Nyagbo is considered as one of the Central Togo Minorities ethnic groups (Kropp & Ford 1988; Nugent 2010). The people live close with the Akpafu on the north, Avatime on the northeast, Tafi on the northwest, and the Ewe communities on the south. The Nyagbo lives in nine communities along the mountain ranges bordering Ghana and Togo. The communities lie on either side of the mountain ridge which is to the east of the road between Have and Fume. These communities are Esroe/Sroe “Banya”, Fiafe “Fiaxoe”, Konda “Begbe”, Kume “Okum” and Agɔdɔme “Orgodome”, Odumasi “Odumase”, Emli “Bazɛ” Anyigbe “Bamale” and Gagbefe “Gbahu”. Gborsi (2015:5) contends that 3 of the communities: Sroe, Konda, and Fiafe are located on the Eweto Mountain (Ghana-Togo frontier), whilst the paramountcy is located at Gagbefe instead of Sroe (the historical traditional home of the people) for ease of access and also for administrative reasons.

The Nyagbo calls themselves Bàtrùgbù (sing: Atrùgbù) and their language as Tùtrùgbù. It is a tonal language with three-level and two contour tones and is spoken mainly in the nine communities that constitute the Nyagbo Traditional Area (Essegbey 2013:236). Tùtrùgbù is a member of the Ghana-Togo Mountain languages (GTM), formerly called Togorestsprachen (Togo Remnant Languages) or Central Togo languages. They are composed of fourteen languages including Animere, Kebu, Tuwuli, Igo, Ikposo, Siwu (Lolobi/Akpafu), Likpe (Sɛkpɛle), Lelemi, and Avatime (Siya) amongst others that are spoken on the mountains of Ghana-Togo borderland. These languages form a subset of the Kwa subgroup of the Volta-Comoe branch of the Niger-Congo language family. In addition to Tùtrùgbù, the Nyagbo also speaks the Ewe language.

The Nyagbo are mostly peasant farmers. The crops they cultivate in the area include cocoa, plantain, banana, cocoyam, cassava, and other food crops. Some of the people are artisans, petty traders, and teachers, among others. The Nyagbo celebrates Budzugbu “we have finally settled” festival. Modey (2011) posits that this festival commemorates their exodus from Efutu-Awutu enclaves in the present-day Central Region through Agu Nyagbo to their present place of abode in the Volta Region. The festival is also used to commemorate the founding fathers of Nyagbo whose efforts secured the Nyagbo State. In line with tradition, law, custom, practice, and usage, they called their paramount chief Ashuigbagbla “the father for all Nyagbo citizens” (Modey 2011). The Nyagbo have historical caves, waterfalls, and a mountain top experience locally called amitodzi where visitors can have beautiful curvatures and scenes of the Volta Lake and the River Dayi in the valley (Gborsi 2015:7).

The oral tradition of the Nyagbo asserts that their xwialẽ “forefathers” originally lived close to the aboriginal Efutu (Fetu) at their village in the northwest of the present-day Cape Coast. It was from here that they moved to settle in the area on the Accra coast, now known as Osu. However, the quest for expansion of their territory and the counter-aggression from the new migrants in the area forced the Nyagbo to move out of Osu to search for a peaceful place to settle. Consequently, the Nyagbo took a long journey eastwards from Accra to settle at Adzina near Akosombo in the Eastern Region (Gborsi 2015:4).

After living in Adzina for many years, the gradual incursion of other migrant groups in the vicinity pushed the Nyagbo to further east to domicile at Tᴐsrᴐ̃ɛ, an area which is fifteen kilometres south of the present-day Anum town close to River Volta (Funke 1910; Heine 1968). Whilst here, the Akwamu wars expansion spread to the Akwapim Mountains and threatened the life of all other aboriginal groups. As a result, the Nyagbo fled from their Tᴐsrᴐ̃ɛ settlement and trekked to Agu Mountains in Togo (Essegbey 2019:9). The Nyagbo oral tradition asserts that the territory they occupied at Agu Mountains in Togo is called Agunyagbo (Gborsi 2015:4).

After enjoying a long period of peace at Agunyagbo, the Nyagbo made a move to return to their original settlement in Osu. This decision was made because the Nyagbo received accounts of stories telling them about the peace in Accra. Unfortunately, on their return to Osu, Accra, the Nyagbo veered off to settle at the foot of the Akwapim-Togo range known in the area as Eweto “Èʋètó” (Gborsi 2015:4). It is said that Kalẽgbe, the leader of the group who is also an expert and brave hunter-warrior audaciously climbed the mountain to hunt for game and also scout for a suitable site for settlement.

In one of his expeditions, Kalẽgbe came across a wonderful spring named Kahyweh and a cave with a landscape serving as an added natural barrier to possible pursuers (Gborsi 2015:4). Kalẽgbe found this habitat on the mountain top as suitable and secure for his people, thus he went down and led his uphill to settle on the new place he has discovered known as Sroe/Esroe. This affirms Nugent (2005:32) assertion that the Ghana-Togo Mountain (GTM) offered “refuge peoples escaping the threat of warfare/enslavement” and “…provided a home for peoples who used their terrain to protect their independence and who came to think of themselves as the autochthons, that is people who have always been there.” Emli people, however, assert from their oral tradition that they were on the mountain top long before the emergence of the eight Nyagbo communities. Adjoe (2011) and Essegbey (2011) argue that this issue of autochthony is a subject of serious contention between the Nyagbo and Emli.

of Identity—History or Narration?” Paper present at the 2011 International

Essegbey, James. “The Dilemma of a Language Documenter.” Paper presented

___. “Touch Ideophones in Nyagbo.” In Selected Proceedings of the 43rd Annual

Nugent, Paul. “‘A Few Lesser Peoples’: The Central Togo Minorities and their Ewe

Neighbours”, in Carola Lentz and Paul Nugent (eds.), Ethnicity in Ghana: The