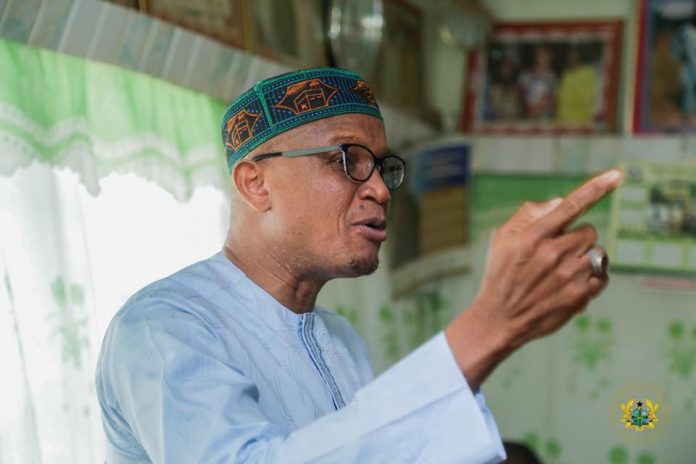 “Politics is about advancing human dignity and prosperity”- Karl Rove. It was precisely to advance human dignity and bring prosperity to the Ghanaian people that President Akufo-Addo, as candidate of the New Patriotic Party (NPP) in 2016, promised to put in place programmes that will ensure equal opportunity for all Ghanaians irrespective of their creed, place of birth or social circumstance. A key part of the promise to establish a society of opportunity for all, was to establish a Zongo Development Fund, to be superintended by a Zongo and Inner-City Development Minister. In presenting his Coordinated Programme of Economic and Social Development Policies, 2017-2024, the President did indeed make good his promise to establish a Zongo Development Fund for the purposes of addressing the development deficit that has been the bane of Zongo communities since independence.

Page 116 of the President’s Coordinated Programme of Economic and Social Development Policies, 2017-2024, states

As part of the efforts to develop Zongo communities, government will set up a Zongo Development Fund (ZODF) with seed funding of GH¢219.5 million. The Fund will support the provision of critical infrastructure in education and training, health and sanitation, local businesses and centres of culture, as well as improve security in Zongo communities. The ZODF is expected to leverage its seed fund to attract additional funding from international partners, private sector institutions, civil society organizations and other non-governmental organizations.

As its mandate as outlined on page 116 of the Economic and Social Development Policy document states, projects that have been carried out by the Zongo Development Fund under the direction of the Ministry, seek to address the educational, health, security, recreation and economic needs of the people in the Zongo communities.

Even though the mandate of the fund has been outlined for it by the Economic and Social Development Policy document, the fund still engages in wide consultative processes to arrive a decision on which project to situate in which community. Chiefs, political, religious and youth leaders often make their requests for projects to either the Ministry or to the fund. A technical team is then sent to the areas where these requests have come from, to validate the projects. The Governing Board of the Fund then reviews and approves or the projects for execution.

This far, projects that are being executed by the ZODF include the construction and furnishing of classroom blocks, provision of Information and Communication Technology (ICT) laboratories, construction of astro turfs, provision of water and health facilities, construction of public and household toilets. Besides, the sector engages in social and economic empowerment programmes. Many of the projects have started, others are near completion while many more are completed.

It is the expectation that the Zongo Development Ministry would be allowed to stay into the foreseeable future in order to guarantee the long-term development of the communities that come under the ambit of the Ministry. Indeed, development is a journey and as the Chinese have stated, “a journey of a thousand miles begins with a step.” It is expected that within a generation, this initiative can dramatically transform the lives of the five million people who live in these communities.

Education is key to the development of Zongo communities and so the MICZD and the ZoDF are keen in ensuring the provision of the necessary infrastructure to facilitate teaching and learning.

Besides, the construction of a community library is ongoing at Adoagyiri in the Nsawam Municipal Assembly of the Eastern Region. The fund has also supplied 300 dual desk furniture to two schools school at Ahamasu in the Kadjebi District of the Oti Region.

Another major initiative of the MICZD is the provision of ICT laboratories in some schools across the country. It involves the provision of computers and furniture. Some of the beneficiary schools are Huriya E/A School in Wa and Falahiya Islamic School in Tumu, both in the Upper West Region; Basin KG/Primary/JHS in Navrongo and Umaria E/A JHS, both in the Upper West Region, and Nuriyya Islamic School Complex in Ho and Aswaj English and Arabic Basic School in Hohoe, both in the Volta Region.

Water is life and the MICZD and ZoDF have given credence to this adage by constructing mechanised boreholes in some Zongo communities. Fifteen of the mechanised water systems have been completed. Some of the beneficiary communities of these water systems are the Bibiani Zongo in the Bibiani/Anhwiaso/Bekwai District and Dwenase Zongo in the Sefwi Wiaso District, both of the Western-North District; Opeikuma Zongo in the Awutu Senya East District of the Central Region, and Dambai Zongo in the Krachi East District of the Oti Region. Contractors have completed all works and are awaiting final inspection and commissioning.

Contractors are also on site for the construction of 23 more mechanised water systems in other Zongo communities across the country.

The ZoDF is also taking aggressive action in ensuring the provision of public and household toilets in Zongo communities and inner cities. Work is far advanced in the construction of nine toilet facilities in some parts of the country.

A total of 252 households in inner cities have benefited from the household toilets. The beneficiary areas include Korle Gonno, Mamprobi, Agbogbloshie, Bukom, Adabraka, Chorkor and Kokompe, all in Accra.

The Fund has completed the supply and installation of street lights in six communities in some Zongo communities. The project has improved visibility and security in the beneficiary communities.

The beneficiary areas include Danfa Zongo and Madina Washington, both in the La Nkwantanang Madina District; Darul Salam Zongo and Ngleshie Amanfrom, all in the Greater Accra Region; Jema in the Bono-East Region, and Opeikuma in the Central Region.

Another area of interest for the Ministry and the ZoDF is the creation of avenues for recreation and physical exercise for the people in Zongo communities. This has culminated in the construction of astro turfs in some communities. The beneficiary communities include Walewale in the North-East Region, Kyebi in the Eastern Region, Madina in the Greater Accra Region, Asawase in the Ashanti Region and Fadama in the Greater Accra Region. Work has commenced to convert five Green Parks in Bolgatanga, Salaga, Yeji, Tafo and Oda into Astro Turfs.

A 994 metres drains have been completed. One of the drains (497 metres) was constructed at Madina Zongo in Accra. Construction of a drain and a retaining wall is about 70 per cent complete at Asem in Subin in the Kumasi Metropolis.

The sector is also undertaking the rehabilitation of a health facility at Kpando in the Kpando District of the Volta Region.

Construction of a school gatehouse for the Accra Girls’ Senior High School at Maamobi in the Ayawaso North District of the Greater Accra Region is near completion, while work has started for the construction of an elevator for the Neo-natal Intensive Care Unit (NICU) of the Maamobi General Hospital. Both projects are sponsored by the ZoDF.

Under the leadership of the MICZD, ICT training programmes are on-going to equip the youth with ICT skills and make them employable. The projects include Zongo StarHub Project (software training), Zongo Coders Programme and the Females in Tech Initiative.

The ZoDF has engaged technical consultants to empower youth with entrepreneurial skills under the Zongo Youth Entrepreneurship Training Programme.

It is instructive to note that many projects are at the procurement stage, which means that the projects have been validated, approved by the Board and are going through the processes for the award of the contracts.

With the onset of Covid-19, the ZoDF took proactive steps to create awareness about the pandemic in Zongo communities and distribute hygiene items to prevent and mitigate its spread in those areas. A team of health professionals were contracted to engage in media campaign on the preventive protocols in Hausa, Dagbani, Twi, Ga and other local languages. The Fund has also distributed liquid soap, hand sanitisers and face masks to chiefs and households in Accra, Kasoa, Kumasi, Ejura and other areas. The plan is to distribute 200,000 pieces of liquid soap and hand sanitisers and one million pieces of face masks to 40,000 households within the Zongo communities.

Development is a process and the key aspect of that process is the identification of the problem. The next step is taking the necessary steps to bring about the needed change. This is indeed the story of the creation of the MICZD and the ZoDF.

If the current trend of development projects being executed by the MICZD and the ZoDF in Zongo communities and inner cities is sustained in the next few years, those areas will witness improvement in infrastructure and living standards of the people.

Therefore, stakeholders in Zongo communities, such as chiefs, political, religious and youth leaders are required to collaborate with the Ministry and the ZoDF to push the agenda of accelerating the development in Zongo communities and inner cities.