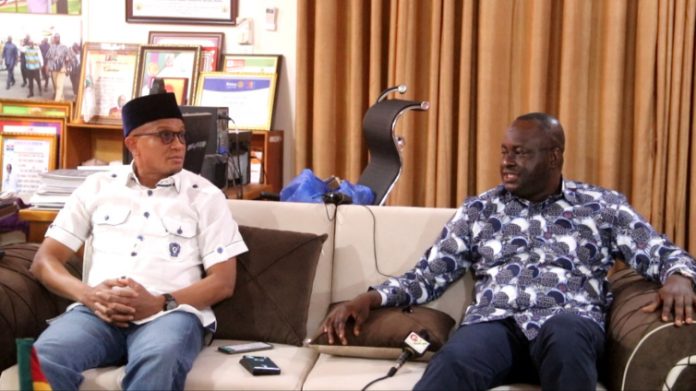 Upper West Regional Minister, Dr. Hafiz Bin Salih has expressed concern over the adulteration of fuel and its increasing cases of smuggling to neighboring countries.

He stated that the region is not only notorious for the smuggling of agricultural inputs but petroleum products as well.

The Minister, therefore, called on the national petroleum authority to up the ante by increasing supervision and monitoring in the region.

“Our region is notorious for not smuggling agriculture inputs but petroleum products as well. I want to assure you as chairman of the REGSEC, we will laisse with you to bring this issue to an end.

“People have been complaining about the quality of fuel in the region. I believe strongly that most of the fuel operators adulterate their fuel. So, I will want people in charge o quality assurance to up their game and go round frequently,’’ he added.

Dr. Mustapha Abdul Hamid was accompanied by some directors is on a five-day tour of the five regions in the northern part of the country and the Bono Region.

The purpose of the visit is to acquaint himself with the operations of the authority, assess firsthand their challenges with a view to formulating a policy to deal with them.

Dr. Mustapha Abdul-Hamid after a brief remark parried the responsibility of addressing the concern of the Upper West Regional Minister to the Director of Policy Coordination, Jacob Amuah.

He stated that the NPA is equally concerned about the issue of adulteration of the fuel and its smuggling and has put in place measures including naming and shaming of the actors to curtail it.

‘‘What we are currently doing is sanctioning all those who fall foul to these activities and we lock up some of these stations. The other thing we are to add is the naming and shaming so that we will publish these stations that have failed with time. At least to warn the motoring public not to patronize those fuel stations.

These are activities that we think that once we enforce them will curtail those incidences of adulteration, he posited.

Dr. Mustapha Abdul Hamid spoke of the increasing fuel prices at the world market which he is said the government is working to ameliorate the sufferings of the people.

Nitiwul unfit to be Minister