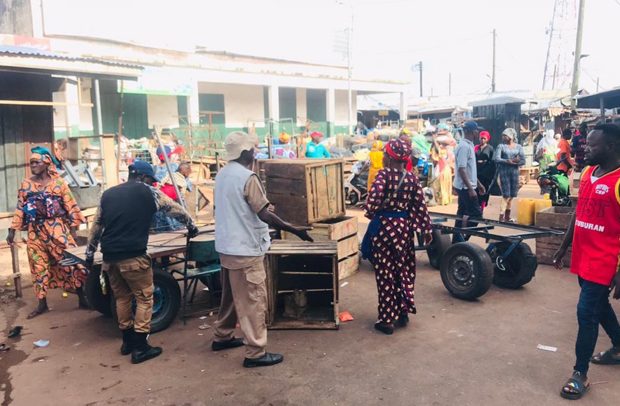 The Tamale Metropolitan Assembly has embarked on a decongestion exercise in the Tamale metropolis of the Northern region.

The exercise took place at the Tamale interchange central business district where traders have turned the interchange into a market place.

The Tamale Metro Assembly taskforce with security personnel’s seized belongings of the traders and destroyed other wooden structures under the interchange.

The Tamale Metropolitan Chief Executive, Sule Salifu after the decongestion exercise told journalists that they have asked the traders to move to the Kukou market where provision has been made for them to sell their products there.

According to him, traders selling under the interchange are putting themselves in danger adding that it is the responsibility of the assembly to ensure that the interchange is used for the purposes for which it was constructed.

He indicated that the overlord of Dagbon , Ndan Ya Na , the clergy , opinion leaders, and other stakeholders have been consulted about the dangers of selling close to the Tamale interchange and that they have given their support to decongest the place.

“ Since we started this exercise no chief or opinion leader has called me because of the decongestion, we have engaged them and we are all on the same page.”

Mr. Salifu disclosed that the police have been instructed to arrest any person found selling under the Tamale interchange henceforth.

“If we prosecute people with heavier fines it will help us to maintain the sanity under the interchange because government committed sums of money to construct it and so I believe we all have a responsibility to support the Metropolitan Security Council to ensure that the interchange is safe for everyone.”

He thanked the Metropolitan Security Council, the chiefs and other stakeholders for their support for ensuring that the decongeetion exercise is successful.

Meanwhile , some of the traders whose belongings were destroyed by the Tamale Metropolitan assembly task force have accused the assembly of not giving them prior notice about the decongestion exercise.

They claimed that the assembly’s taskforce collect tax from them daily and that they were surprised about the decongestion exercise.

“ Just last week Friday the taskforce came and took taxes from us , before we started selling here we had permission from the assembly and today they are here to sack us from the place and that is what we don’t understand.”

A trader , Alhassan Shafawu , told DGN Online that the the Kukou market is far from the central business district and that customers will be discouraged to come there and buy.

“ From town to the Kukuo market is very far and we know that people will not come there to buy and so we are begging the assembly to rather look for a market close to town and we will voluntarily move there because this is the little we do to earn something small to feed our children.”