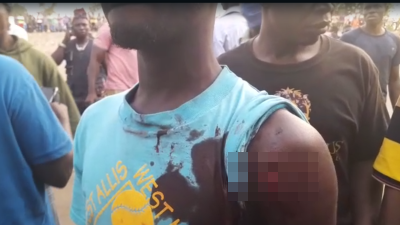 One person has been shot in Buipe after the youth in the area massed up at the Damongo Police station demanding the release of eight people arrested for allegedly burning houses belonging to some Fulanis.

The arrest came after a call by Buipewura Abdulai Jinapor II to the police to arrest the perpetrators.

The youth of Buipe led by the Gonja Land Youth Association have been protesting the enskinment of a Fulani chief for Mande, a suburb of Buipe.

The Buipe youth got agitated over the enskinment of Fuseini Musah Buri as the Fulani leader in Mande.

Some eight people were arrested by the police after they allegedly demolished some houses and sent them to the Damongo Police station.

However, irate youth in Buipe besieged the police station demanding the release of their colleagues.

In a bid to disperse the youth, the police fired warning shots hitting one of the youth in the process.

The injured person has been sent to the hospital for treatment.