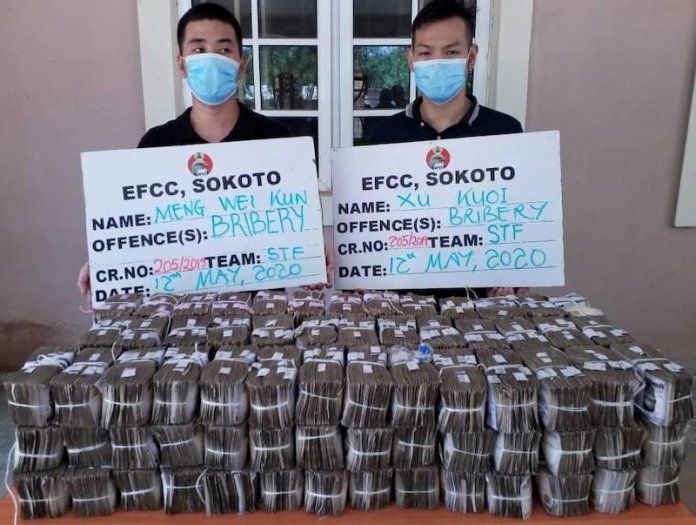 The two Chinese nationals Meng Kun and Xu Koi were arrested for allegedly attempting to bribe the EFCC zonal boss with N 100 Million.

The suspects were arrested with the cash as evidence.

The commission said the bribe was offered its Sokoto zonal head to compromise investigations into the operations of China Zhonghao Nig. Ltd, a company the two arrested persons represent.

This adds to the tall list of illegalities and corruption involving Chinese Nationals in Africa. It also brings to light the extent to which some Chinese investors who have been given fat and juicy contracts in many African countries are willing to go to make money in Africa but escape accountability and justice when they do shoddy work or in some instances don’t deliver at all.

The Chinese owned company operating in Nigeria, China Zhonghao Nig. Ltd is under investigation following two contracts awarded by the Zamfara state government to the company to construct township roads in Gummi, Bukkuyun, Anka, and Nassarawa in Zamfara State and the construction of 168 solar-powered boreholes in the 14 local government areas of the state.

The EFCC in a statement said the investigation is as a result of intelligence gathered on alleged conspiracy, embezzlement, and money laundering against the Zamfara State.

The construction company had reportedly received payments of over N 41 billion “but diverted about N 16 billion which the commission has traced to some bureau de change operators”.

Obviously, with poor, weak, and corrupt systems, these investors often are able to find local collaborators who create a safe haven for such wickedness to go on but certainly not on this occasion.

Worried by the professional conduct and consistency of the investigations, China Zhonghao Nig. Ltd reached out to Abdullahi Lawal and offered him N 100 Million bribes to “bury the matter”, the EFCC statement said.

The first installment of a total of N 100 million was paid by the two arrested representatives of the company in cash contained in 4 table water boxes.

“In a grand design to trap the corrupt officials, Lawal played along and on Monday, two representatives of the company, Meng Wei Kun and Xu Kuoi, offered him cash totaling N 50 million in their office along Airport Road, Sokoto.

Ghana, Nigeria, Congo, and many other mineral-rich African countries continue to battle the influx of Chinese nationals which has led to several illegal mining activities obviously perpetuated with high success with the connivance of indigenes.

On 28th April 2020, The Nigerian police in Zamfara arrested some Chinese nationals for engaging in illegal activities. They were later transferred to Abuja for prosecution.

The News media in Africa is awash with similar illegalities perpetrated by Chinese nationals in different African countries.

Many are those who have praised officials in Sokoto state for standing up to such high temptation and enforcing the law.

In his opinion, the Gyasehene of Akuapem Mamfe, Nana Dr. Atikoasere Oteng-Boadu lll said, “The action taken by the EFCC zonal office in Sokoto state and the conduct of its Zonal head, in particular, is not only commendable but also heroic and patriotic.

The astute traditional leader advised African governments “to sit up and demand respect for anti-corruption laws by enforcing the laws without fear or favor of nationality or status as investors. He said Africa must pay particular attention to the interest shown by the Chinese communist party in Africa as an emerging market and take bold and decisive policy steps to safeguard Africa’s interest in a very form of business Chinese investors bring to the continent.