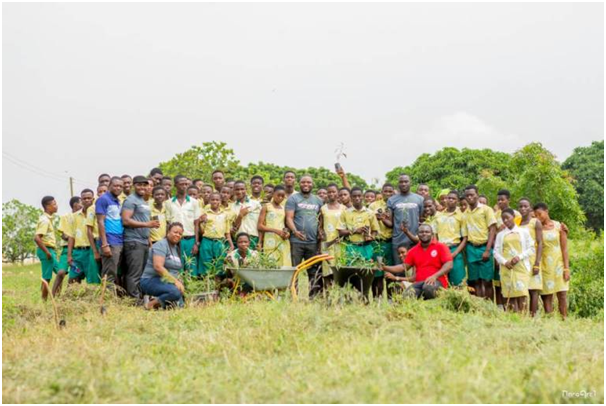 The project, which commenced with the planting of 1,000 Acacia trees on the school’s premises is aimed at protecting the school’s vast unused land, and by extension instill into the students, the habit of afforestation, and the importance of trees to humans.

The initiator and National Coordinator of Memory Tree Initiative, Nana Yaw Osei-Darkwa said apart from the  medicinal and  economic values of trees, they protect the environment, hence the need for the younger generation to be encouraged into tree planting.

He admonished Ghanaians to desist from cutting trees since human existence depend on trees.

“Trees are very important for us as human beings. It turns carbon dioxide to oxygen for us to breath, have medicinal values and at the same time have economic values and yet people turn to cut down without replanting, so I entreat every one of us to take the future into our own hands and make our environment very conducive to live in”.

According to Mr. Osei-Darkwa, his outfit has taken up the mandate to plant trees because in recent years, deforestation has engulfed the nation and this has led to barren lands that have contributed to the loss of agricultural values. He noted that the first 1000 trees were sponsored by the planting partners of Memory Tree Initiative’; One Tree Planted, whom he hoped would support the 10,000 trees program as well.

The Headmaster of Ningo Senior High School Mr. Edmund Botchway, welcomed the project, saying the trees which are being planted are going to serve as a place for relaxation for both students and teachers, and also going prevent people from encroaching the schools land. ‘

He said as an agrarian, it was his expectation this initiative would to be taken into rest of the schools nationwide, to help students know the importance of replanting trees to replace felled ones.

According to the United Nations, despite forests being essential to the balancing of the global ecosystem, to maintaining human well-being and to achieving sustainable development, decades of unsustainable use and management have destroyed, degraded and depleted enormous quantities of the planet’s natural forest.

It estimates that over 13 million hectares of forests continue to be lost each year, hence the need for investment into tree planting to be scaled up.

The world’s forests, according to the UN serve as home to 80 per cent of all land-based species of animals and plants. Around 1.6 billion people depended on forests for their livelihoods. This makes the protection and sustainable-management forests a priority of the global   2030 Agenda for Sustainable Development.