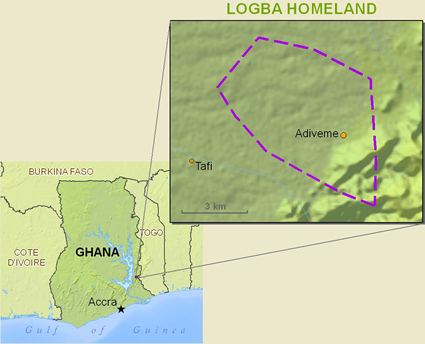 The Logba (Ikpánawo/Akpánawo) are ancient Guan, agriculturalist and Ikpána-speaking people found on the southwestern slopes of the Togo Akwapim Mountain Ranges in the Hohoe District of the Volta Region of Ghana. Logba land on the mountainous region is bounded on the North-East by Avatime, the South by Nyangbo-Tafi and on the West by Ve. On the Eastern part is the Ghana-Togo Mountains (GTM). Originally, the people of Logba resided in eight major communities: Vuinta, Ogɔme, Akusame, Adiveme, Adzakoe, Alakpeti “under Alakpe/Alakpa hills”, Tota (situated higher up in the mountain known as Aya), and Klikpo.

The seat of the Logba Traditional Area or paramountcy is Klikpo. Apart from these towns, Dorvlo (2008:3) contends that due to the activities of the settler farmers in the area, two new small farming communities of Abayeme and Dufi have sprung out on the outskirt of Tota, whilst on the north of Akusame, a small new settlement called Xɔglikɔƒe has also emerged. Klu (2014:36) explains that Abayeme, Dufi, Kpetegu and Dzado located on the top of the mountain are suburbs of Tota, whilst Xɔglikɔƒe (Hoglikofe) and Andokɔƒe (inhabited mainly by people from Ando, a town in the Southern part of the Republic of Togo) lie below the town of Adzokoe. The Ewe migrants from Dzodzo in the Ketu District that dwells in the area also founded villages of Agbobakɔdzi and Dzodzekɔdzi which forms the suburbs of Alakpeti, which is the commercial centre of the Logba State.

The Logba calls themselves Ikpánawo (Akpánawo), which means “truthful person”. Hence, in Logba, a female Logba native is called Akpanadzɛ, whilst a male Logba native is known as Akpananyi.  They call their land Logba whilst their language is known as Ikpána, which means ‘truth’ (Dorvlo 2008:1; Green 2009). Ikpána is a member of the Ghana-Togo Mountain languages (GTM), formerly called Togorestsprachen (Togo Remnant Languages) or Central Togo languages (Struck 1912; Dakubu and Ford 1988; Ring 1995; Nugent 2010). GTM languages are composed of fourteen languages including Animere, Kebu, Tuwuli, Igo, Ikposo (Akposso), Siwu (Lolobi and Akpafu), Nyagbo (Tutrugbu), Likpe (Sɛkpɛle), Lelemi, and Avatime (Siya) amongst others that are spoken on the mountains of Ghana-Togo borderland.  These languages form a subset of the Kwa subgroup of the Volta-Comoe branch of the Niger-Congo language family. Ikpána is only distantly related to its direct neighbours Avatime and Nyagbo-Tafi, but Heine (1968) contends that it is more closely related to the Akpafu (Siwu) and Santrokofi (Sɛlɛɛ) languages spoken northwards. Ikpána ranks amongst the least studied of the fourteen GTM languages. The first bold work on the language is Westermann’s (1903) concise grammatical sketch in German. Apart from Ikpána, the Logba also speaks Ewe and Twi.

The ethnonym, Logba “one who collects rubbish/vegetative undergrowth” or “the one who makes the path” is said to have been given to them by their Ewe migrant neighbours. Two theories underpin the meaning of Logba. In the first theory, Logba is a contraction of two Ewe words lɔ́ ‘collect’ gbě ‘rubbish’; this flows from the version of the so-called Notsie migration with the Ewes from Notsie, where the Ikpánawo were said to be in front of the group and made the path by literally ‘breaking and collecting the thick vegetative undergrowth’ to facilitate the movement for the Ewe (Dogbeawo) who followed (Dorvlo 2008:1). The second theory, however, avers that Logba is a contraction of two Ikpána words, la ‘to make’ and ɔgbá ‘path’, hence “Pathmakers”. It is said that the Ikpánawo as professional hunters that resided outside the great walls of Notsie assisted the Ewe (Dogbeawo) in their joint migration by clearing the bush to make a path for the Ewes. Dorvlo (2008:1) asserts that the Ikpánawo earned the ethnonym Logba as a result of the reference that the Ewe (Dogbeawo) made to them when they heard them saying: la ogbáá! La ogbáá! ‘make the path, make the path.’

The Logba are primarily subsistence farmers, producing foodstuffs such as cassava, maize, yams and forest fruits. They supplement their farming activities with cash crops like cocoa, coffee and sawn mahogany logs. The Logba area is known for its scenery, which includes waterfalls, cliffs, and limestone formations, including one or two known small caves with minor speleothems. The Logba are traditionalists and Christians. They called the Supreme Being, Omawu, but the Omawu is not worshipped directly since there are no shrines dedicated to his worship (Klu 2014:41). The traditional religion in Logba, however, centres on ancestor reverence and the worship of the supreme deity known as Sumafá “the mighty thunder that cannot be passed over”, which is also popularly called Akpanamɔ ‘Truth deity’ or ‘Logba god’. The Amɔwasa/Amɔnutsiwo “priest” is the pillar around whom traditional religious activities revolve. Dorvlo (2008:4) explains further, thus: “He performs libation during most of the local traditional ceremonies. Ayadzi ‘Saturday’ is a special day for the priest. He does not go to the farm on this day; rather he is supposed to stay at home and offer prayers in the house of Sumafa. A she-goat is not supposed to be slaughtered in the town. In June, when preparation for the cultivation of rice begins, Amɔwasa pours libation to the gods. Also, during the yam festival in September, he is called upon to pour libation. Other rites are performed which have religious components.”

The Logba have various traditional musical ensembles such as Obrim, Adevu, Akpi, Agbadza, Gabada, and Vuga (Ukunango), which was learned from the Akan. The most popular and the oldest is Obrim musical ensemble, which is performed during most of the recreational, life cycle events (birth, puberty, marriage and death) and durbar of chiefs in the Logba traditional area. Obrim instrument which is made up of a carved pawpaw stalk sealed with a skin of a bat was said to have been performed to charge the people by the Ikpánawo (Logba) before the great walls of Notsie were broken for the Ewes to have their freedom (Kqoufi et al. 2015).

Two oral traditions underpin the origin of the Logba. In the first oral tradition, the Logba elders assert that they were amongst the early Guan group that lived in Nubia (Egypt) before conflicts in that enclaves forced them to move to Sudan. The Logba moved from Sudan and settled later in the Niger River zone and later moved to settle in the area that later became the Notsie Kingdom. The Logba had a peaceful life in the area until Agokoli became the King of Notsie. The Logba lived outside the walls of Notsie, but that did not prevent King Agokoli that maltreating their people. Thus, when the Ewe (Dogbeawo) groups made a move to flee from Notsie the Ikpánawo (Logba) used their Obrim musical ensemble to perform a ritual dance) before the great walls of Notsie were broken for the Ewe (Dogbeawo) to flee from the tyrannical rule of King Agokoli (Kqoufi et al. 2015).

Obianim (1990:3) and Dorvlo (2014) and, however, posit that the Logba relates that have come together with the Gbe (one of the Dogbeawo/Ewe group) from Ketu to settle at their present area. This view flows from the long-time Ikpánawo (Logba) contact with the Ewe (Dogbeawo), particularly the Gbi. This pro-Ewe version which seems to have gained traction amongst some Logba elders and communities avers that they were Ewe (Dogbeawo) but some of their ancestors decided to create a new ethnic group with a distinct identity by inventing a language that developed over the times into Ikpana (Klu 2014:37). Some Logba elders contend that this claim is a clear revisionist attempt to Ewenised the Guan-Ikpánawo (Logba). Whilst the Ikpánawo (Logba) may have come into contact with the Gbi, a Ewe (Dogbeawo) sub-group in Notsie, they were certainly not in Ketu. However, when the combined group of Ewe and some Guan groups fled from Notsie, the Ikpánawo, who were hunters took frontal position clearly and ‘and collect the thick vegetative undergrowth’ to make path that facilitated the movement of the Ewe (Dogbeawo) who followed (Dorvlo 2008:1). As a result of this path-making role of the Logba who were then called Ikpánawo “truthful ones”, the Dogbeawo (Ewe) group gave them the name, Logba “the one who collects rubbish/vegetative undergrowth” or “the one who makes the path”.

In the second theory of the origin of the Logba, the people are said to have been remnants of the ancient and extinct Guan group known as Maakɔ́/Makɔ́. Debrunner (1962) and Heine (1968) narrates from the ancient oral traditional and linguistic analysis of the Ikpánawo (Logba) that they were descendants of the Makɔ́ who lived on the area around Nkonya-Wurupong. The Makɔ́ group that included the Ikpánawo (Logba) then dominated the whole Nkonya-Wurupong enclave to the east, i.e. Akpafu-Likpe-Santrokofi for many years. However, in 1750 the Makɔ́ were attacked and defeated by a combined tripartite force of Nkonya, Santrokofi and Akpafu (Heine 1968:39).

The defeat caused the Makɔ́ groups to disperse and flee southwards following the selling of the Makɔ to the Asante as slaves by the Akpafu and Nkonya (Heine 1968:40). Some Makɔ́ went to live among the Akpafu, and the Nkonya, Santrokofi, Likpe and Buem. At the Nkonya and Akpafu, the Makɔ́ who originally spoke Sikɔ were allowed to speak Sikɔ once a week and for rituals, otherwise, they had to speak the language of their hosts. The Ikpánawo (Logba) who were part of the fleeing Makɔ́ group moved to settle or joined Logba (Debrunner 1962:114).

of the Impact of Puberty Rights for Development among the Logba.” MPhil Thesis,

Nugent, Paul. “‘A Few Lesser Peoples’: The Central Togo Minorities and their Ewe

Neighbours”, in Carola Lentz and Paul Nugent (eds.), Ethnicity in Ghana: The

Ring, Andrew J. Ewe as a Second Language: A Sociolinguistic Survey of Ghana’s