History of the Chala 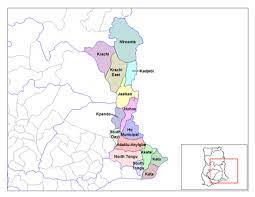 The Chala/Cala (Bogoŋ) are agriculturalist, patrilineal Chala-speaking people living in the north-eastern corner of the Nkwanta South District in the Oti Region and the Kpandai District of the Northern Region of Ghana. In the Nkwanta South District of the Oti Region, the Chala (Cala) lives in four scattered communities: Odomi (six km north of Nkwanta), Ago (Agou/Agoin), Keri, and Kabiti; whilst in the Kpandai District of the Northern Region, they live only in the Jadigbe village near Seipe, South of Ekumdipe village (Frawley 2003:121). Odomi, the only town where the Chala (Cala) constitutes the majority of the population, is their traditional capital and the seat of their Djodjane “the Paramount Chief”.

The exonym, Chala (Cala), which is a vulgarisation of Kyala is a contraction of Kyɛ-ila, meaning “to carry a load on the shoulder” (Baker 2015:2). Thus, Chala (from Kyɛ-ila) are “people who carry their belongings on their shoulders”. Chala (Cala) is the name that the Achode gave the Bogoŋ when they fled from the Tchaoudjo hills in Togo through Kyilinga (Chillinga) carrying their belongings on their shoulders to seek refuge with the powerful deity, Brukun (Bruku). Thus, Bogoŋ is the original name of the people, whilst Chala (anglicised from Kyɛila) was the nickname or the name outsiders gave to the Bogon.

The Bogoŋ (Chala/Cala) society is based on patrilineal inheritance, thus a property of a man goes to his male children. A man inherits the land, house, and livestock from his father whilst a woman also inherits from her father but gets a smaller share.  In terms of political structure, the Bogoŋ (Chala/Cala) State operates a chieftaincy system. At the top is the Djodjane “Paramount Chief” with his seat at Nkwanta-Odomi. Below him are the sub-chiefs from various towns and villages under him.  The chiefs are selected by the kingmakers in consultation with other elders. The kingmakers comprise heads of clans, the mankrado “village head” and the queen mother.

The Bogoŋ (Chala/Cala) are very religious, thus the three religions of Christianity, Islam, and African Traditional Spiritualties are found in their territories. Traditionally, the Bogoŋ (Chala) believe in a Supreme Being and a creator-God called Nasor or Issor (Brant 1985; Baker 2015:2). The theonym, Nasor/Issor means “something high that is beyond reach’ (Brant 1985).  This underscores Bogon’s (Chala) acknowledgment of the Nasor/Issor as the Omnipotent-Creator who made everything in the universe including all the divinities.  As a result, Nassor/Issor is the name they mentioned their prayers for help and favour. Apart from Nasor/Issor, the Bogoŋ (Chala/Cala) have various deities and shrines that housed them. However, their national deity is called Jogo; he is a female deity that “gives health, protection, fertility — anything spiritual or material” (Baker 2015:2).  Jogo is given sacrifice when she grants a wish or provides  a need, and as the Bogoŋ (Chala/Cala) explain, ‘You only pay what you borrow’.” Jogo’s ceremony is held on Sodi day. Jogo has a cult, once a person has been initiated into the cult, he will never be allowed to go to school. Every two or three years the Bogoŋ (Chala/Cala) come together with their fellows from various towns in Ghana and Togo to perform certain ancient rites at the Jogo shrine at Nkwanta-Odomi.

The occupation of the people is subsistence agriculture. They have vast stretches of arable land with suitable vegetation and a climate for optimum crop production. The Bogoŋ (Chala/Cala) lay claim to large territory north of Nkwanta as their traditional lands despite having just one village (Ago/Agou) in that area (Brant 1985). The main crops they produce are yam, cassava, cocoyam, plantain, and cereal (maize, rice, etc.). In the past, the Bogoŋ (Chala/Cala) farmed several cash crops, including beans, cocoa, and chickpeas, Agro-processing is largely limited to gari processing using cassava. They also keep ungulates (mammals who have hoofs such as goats, sheep, and cattle) and pigs for both domestic and commercial purposes.

The Bogoŋ (Chala/Cala) oral tradition asserts that their ancestors originate from the River Benue in Nigeria, which they call Kyada (Chadda), but vulgarised by outsiders as Chala/Challa (Brant 18985). From Benue, the Bogoŋ journeyed eastward through several settlements and highlands to settle first at Nikki in Northern Benin before moving into Atakpame enclaves to live at Sada in the southern Central Tchaudjo Region of the present-day Republic of Togo (Brant 1985; Kleinewillinghöfer 2002:80). The ethnic groups (including the Delose/Ntrubu who were of the same stock as Bogoŋ/Chala and were living together with them) scattered on the Sada hills of Tchaudjo experienced massive attacks from the powerful ethnic groups, thus Bogon and their siblings (Delose/Ntrubo) fled from the area to seek new settlements. On this onslaught, Froelich (1963:60) averred that survivors fled in all directions, but a large part or majority fled together from Sada via the Mono to the east and settled in what is now Kusuntu/Koussountou) and Adele hills.

The Bogoŋ and Delose (Ntrubo) moved further to Kusuntu and Adele hills in Togo to settle in Ambrusa (now ruined town) on the Adele hills side of Ghana. Whilst here, the Asante expansionist war into the Volta enclaves under the leadership of Osahene (Captain) Osei Yaw caused the mountainous inhabitants to scatter and flee for their lives (Brant 1985). The Bogoŋ and Delose got separated; some of the Bogoŋ fled back into Togo and founded the towns of Atakpame and Kpalada whilst others founded villages as far as Dume in Benin. Some of the Bogoŋ group also fled to the west of the Oti and settled in separate villages between the Nawuri (Kleinewillinghöfer 2002:70). Thus, relying on German colonial official reports, Zech (1904) and Westermann (1933) mentioned five Bogoŋ (Chala/Cala) settlements that were still located on the western side of the Oti in Nawuriland at the end of the 19th century.

Other Bogoŋ groups stayed near their old settlement (probably Adjuati/Ambrusa, which was named after their famous warrior) and founded the new “capital” Odomi and Keri  (Kleinewillinghöfer 2002:70; Chederre 2007). Oral tradition from Atwode (Achode), however, asserts that the Bogoŋ led by one Gadi fled from their place in Togo (Adele hills) through Kyilinga (Chillinga) to settle at Asunabuase in the Atwode (Achode) area to seek refuge with the great Bruku (Brukun) deity (Baker 2015:2). From Asunabuase, the Bogoŋ were said to have been led by Gadi to settle at Odomi for it was begoŋ ‘peaceful’ and free from wild beasts. This Atwode (Achode) version seems to position the Atwode (Achode) as the first arrivals at Odomi before the Bogoŋ, and it is rejected by the Bogoŋ who claims that “the Akyode came later and settled on the same land with them” (Barker 2015:2).

Kleinewillinghöfer (2002:69), however, confirms the Bogoŋ (Chala/Cala) as position as being the founders of Odomi (or Adjuati, which was divided into two), thus: “Over the years, Acode families immigrated to Odomi and Keri in considerable numbers and settled in their own neighborhoods. Many Cala married Acode women and in many families, the “mother tongue” prevailed, so that Gicode, the language of the Acode, in Odomi and Keri predominates, even if the Cala is still spoken there. This probably explains why the Cala in Odomi and Keri are not in the travel reports of the German colonial officials.” The thriving of Odomi and Keri saw the return of most of the Bogoŋ (Chala/Cala) residing across the river in the villages on the western side of the Oti returned. An immigrant Mossi (Moshi) hunter in the area also founded Agou and some of the people in Bogoŋ tiib “Bogoŋ land” went to join him (Baker 2015:2).

The Bogoŋ (Chala/Cala) and the Atwode (Achode) lived together peacefully for a long time until the late 1950s and early 1960s when a major bloody land dispute forced the Bogoŋ to move away from the Atwode to form their new villages (Brant 1985). Before the violent land dispute that brought the division, the Bogoŋ land was interspersed with the Atwode so much that the Bogoŋ spoke Gikyode (Gichode), the language of the Atwode and nearly lost their own native language, Chala or Bogoŋbu. One positive outcome of the Bogoŋ conflict with the Atwode was that it led to massive Chala nationalism, particularly the revival of their language and culture.  They built the small town of Odomi out of the old divided Adjuati and their chieftaincy was revived (Brant 1985).

Peoples. The unpublished online manuscript for Joshua Project at,

Kleinewillinghofer, Ulrich. “The Noun Classification of Cala (Bogoŋ)- A Case of

Tem in Togo: Cãla, Delo, and Bagó. Edited from recordings by A. Mischlich.”

von] Graf. From the protected areas of Togo. Country and people on the north-western

border of Togo. Communications from explorers and scholars from the German