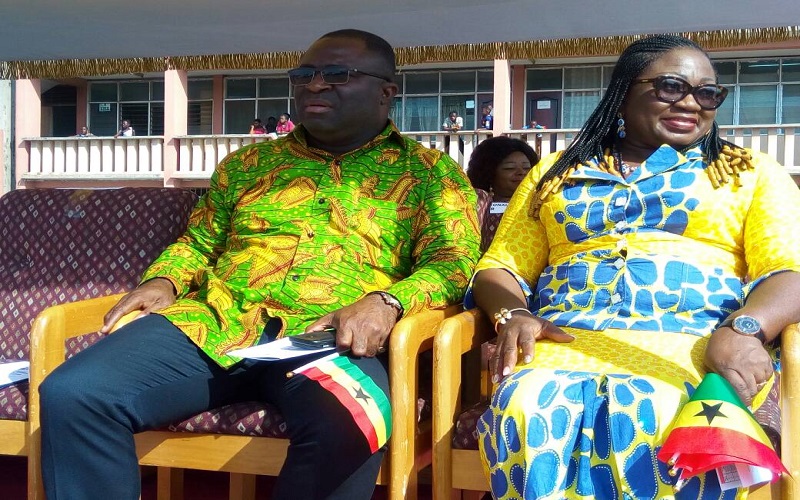 There was drama at the Kumasi Jubilee Park on Tuesday during the 61st Independence Day Parade after the Deputy Minister of Works and Housing, Eugene Boakye Antwi who doubles as Member of Parliament for Subin Constituency was not invited to sit on the platform after arriving ahead of other dignitaries.

The angry MP broke protocol and sat on the middle seat on the platform which had been reserved for other dignitaries who had their name tag on the chair.

The protocol officers immediately drew his attention that the seat had been reserved and politely asked him to move back with his colleague Madam Patricia Appiagyei.

The request provoked the Subin lawmaker who started to use unprintable words on the security officers who were in charge of protocol.

The MP went ahead and took off the name tags on the front seat reserved for the Ashanti regional police commander COP Ken Yeboah and Deputy Minister of the Ashanti region Madam Elizabeth Agyemeng and sat on the seat with Madam Appiagyei.

However, in order not destabilize the programme, the security officers mostly soldiers restrained their anger and allowed the minister to have his way with Madam Patricia Appiahgyei who sat quietly next to him while he continued to rant.

This situation created by the Minister created some confusion after the arrival of the members of the Ashanti regional Security Council (RESEC) not knowing where to sit.

The Ashanti deputy regional minister and police commander who were supposed to sit next to Ashanti regional minister were politely advised by the protocol to take their seat on the middle role of the platform for the programme to commence.

No amount of words could persuade the Subin lawmaker to take his rightful place behind the front row leaving the protocol officers in haste to find other seats for the Police Commander.

The MP insisted he is the law maker for the Subin constituency and minister of state and therefore nobody can stop him from taking the first front seat reserved for the deputy regional minister and the regional police commander.