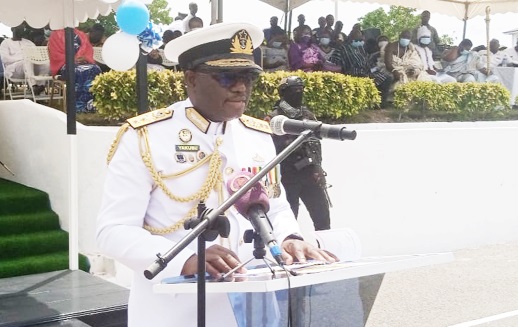 The Ghana Navy has begun to deploy armed guards for large fishing vessels operating in the Gulf of Guinea to curb the activities of pirates.

The Chief of Naval Staff (CNS), Rear Admiral Issah Adam Yakubu, said the move was to prevent pirate attacks on fishermen and sailors, usually for ransom.

At the CNS’ Ceremonial Divisions Parade 2021 at the Eastern Naval Command, Tema, Rear Admiral Yakubu said the effort had yielded some results.

The ceremonial division, administrative inspection and fleet review, is held to assess the state of preparedness of the Ghana Navy ships and shore establishments.

Rear Admiral Yakubu disclosed that two suspected pirate boats, which suspiciously approached some fishing vessels, were successfully warded off by the armed guards on board about 105 nautical miles south of Aflao on October 11, 2021.

The Gulf of Guinea region remains the hotspot of piracy, and, according to the International Maritime Bureau (IMB), the region accounted for 43 per cent of all reported piracy incidents in the first three months of 2021.

The Chief of Navy Staff said early this year, almost every fishing vessel going to sea came under serious threat, adding that at one particular time, there were almost 20 fisher folks being held in captivity as pirate hostages.

Rear Admiral Yakubu noted that the upsurge of pirate attacks on fishing vessels led the Ghana Navy to restrategise and increase its patrols on the high seas.

He said the navy also engaged stakeholders in the fishing sector, which resulted in the deployment of armed guards on fishing vessels, one of such operations resulting in the incident where two suspected pirate speed boats were warded off by the armed guards near Aflao.

Rear Admiral Yakubu disclosed that the Ghana Navy had established a Riverine and Logistics command, and explained that the Riverine Command would focus on the country’s river bodies to get rid of illegal mining activities, illegal fishing, child trafficking and other harmful practices on the country’s water bodies while ensuring sanity in the use of the water body as transport and for consumption.

Rear Admiral Yakubu disclosed that the government had approved the budget for the purchase of four offshore patrol vessels for the Ghana Navy, as well as the acquisition of four fast patrol boats, to augment the fleet of the Ghana Navy.

“This will be a significant addition to the Navy’s dwindling fleets,” he said.

At the parade, the CNS presented citations and flat screen television sets to five ratings and a civilian employee of the Eastern Naval Command for distinguishing themselves in their various units.