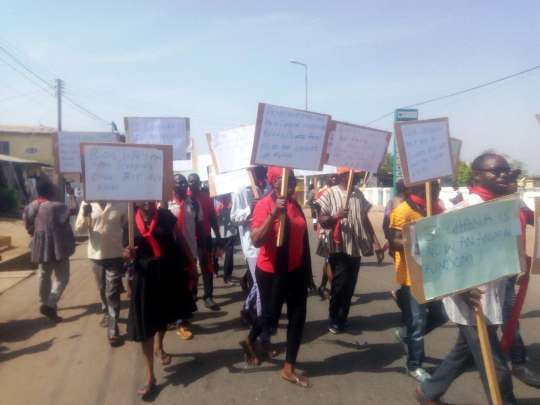 Dozens of aggrieved customers of defunct GN Bank downgraded to savings and loans company as well as Gold Coast Securities Company in the Upper West Region have demanded immediate payment of their locked-up savings.

The angry customers made up of mainly pension workers, businessmen and women and several other government workers said failure by management of the companies to allow them to withdraw their monies was seriously undermining their abilities to care for their basic needs.

Though, the customers called on government to intervene in the matter, they have vowed to continue hitting the streets of Wa with series of demonstrations until their demands were met.

The customers marched peacefully through the Wa Central Market to the main lorry terminal and later converged at the forecourt of the Upper West Regional Coordinating Council (RCC) to submit a petition to the Regional Minister.

They chanted war songs and carried placards with inscriptions such as “Nduom we want our monies, pay us our monies”.

Mr Gilbert Nuuri-Teg, the RCC Chief Director, who received the petition on behalf of Regional Minister Dr Hafiz Bin-Salih urged the customers to exercise restraints as the minister studied it for redress.

Spokesperson for the customers, Mr Stephen Kpen, told the Media they were disappointed in the Bank of Ghana for totally neglecting the plight of the teeming customers.

He said in spite of their cry in February demanding an intervention from stakeholders, nobody listened to their case as the GN Bank, Gold Coast Securities Company, Bank of Ghana and Security Exchange Commission remained aloof.

Mr Isaac Nwebabora, Convener of the aggrieved customers, said since June 2018, none of their members could withdraw money from the Bank despite managers pledge of paying their monies by March.

“Government workers taking salary through GN bank, you will go at the end of the month and they will give GH¢ 50 meanwhile Controller and Accountant General has paid the money,” he added.

“Though I am a pensioner, I am still paying school fees and other family members are depending on me, my child attending polytechnic has dropped out due to this money locked up there”, she said.