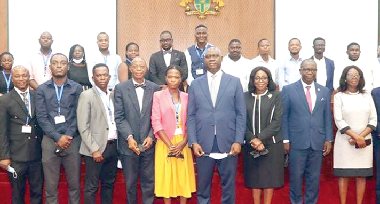 The Chief Justice, Justice Kwasi Anin Yeboah, has inaugurated the Judicial Press Corps with a call on journalists to exhibit professionalism and equip themselves with the rudiments of court reporting for accurate reportage and effective public education.

At a short ceremony in Accra, the 27-member press corps was sworn in as recognized journalists for the coverage of cases related to the court and court processes in the country.

Speaking at the inauguration and the launch of a handbook to aid the work of the reporters, Justice Anin Yeboah said the formation of the press corps was another chapter in the relationship between the Judiciary and the media.

According to him, media practitioners around the world performed a necessary function of keeping citizens informed in order to keep their leaders in check, make informed choices and participate in the growth of their democracies.

For this reason, the work of the media, he noted, was critical for the survival of democracy, observing that “without the media freely practising their craft, no democracy would survive”.

Justice Anin Yeboah noted that in as much as the freedom of the media needed to be recognised and protected as enshrined in the constitution, journalists must guide themselves with the knowledge of how the court system operated.

He was, therefore, hopeful that the handbook for journalists would help the press corps and all members of the media that have interest in court reporting.

The Chief Justice acknowledged the changes that had occurred in the media over the years through the use of technology, which made the media more dynamic with several exciting prospects.

“None of us could have predicted that a media house could be literally launched with nothing more than 5 inches of glass and plastic and come to reach millions of people”, he indicated.

Advising the press corps to be accurate in their court reportage, Justice Anin Yeboah said: “When information which is not true about pending cases is spread about the judiciary, it undermines trust in our work and eats away the very foundations of our republic”.

The Judiciary, he said, required that information about the institution be accurate and handled with utmost care, and should not deceive the public.

A Justice of the Court of Appeal, Justice Dennis Adjei, who launched the handbook, explained that every profession had its language and, as such, there was the need for journalists who communicated on events of the court to be abreast of the language of the court and communicate in the language which was understood by the public without adulterating its meaning.

“The appropriate use of terminologies by judges must be understood by the journalists to enable effective communication with numerous listeners and readers,” he said.

The four-chapter handbook, he said, was to build the capacity of trained journalists to, among other things, understand the court structure, its language and activities.

For his part, the President of the Ghana Journalists Association (GJA), Mr. Affail Monney, while commending the Judicial Service for providing free capacity enhancement training for court reporters to enhance their reportage, expressed reservations about the frequent attacks meted out to journalists on court premises which had become a dominant theme in certain high-profile cases.

“We urge our court reporters to take the handbook for journalists as the professional Bible or Quran, internalise their content and reflect them in their stories,” the GJA President said.

For his part, the Chairperson of the National Media Commission (NMC), Mr. Yaw Boadu- Ayeboafoh, praised the Judicial Press Corps for coming together to share ideas and enhance their work.

He advised the press corps and journalists in general who report from the court to educate themselves on the work and terminologies associated with the Judiciary.