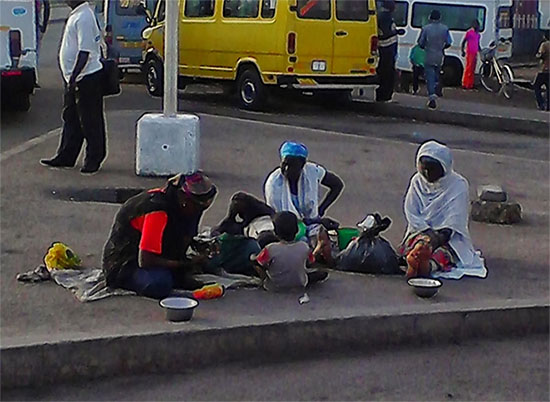 The Shiashie end of East Legon and indeed some parts of Accra have a new disturbing feature. In respect of the Shiashie traffic intersection, many beggars have overwhelmed the point where the road joins the busy dual carriageway as it makes its way towards the University of Ghana junction and beyond.

As their parents shelter themselves under nearby trees, their young teenaged kids swarm on motorists as they wait for the traffic lights at the intersection to clear them to move.

Hailing from Niger, a Francophone country, they have mastered a few words and sentences in English, the bottom-line of which is ‘we want money. We are hungry.’

They create inconveniences for both motorists and the city’s authorities whose duty is to rid the nation’s capital of the eyesore created on a daily basis by the alien beggars.

Beyond America House in East Legon and not far from the nearby fuel station, they have pitched another camp where they appear to shelter in the evening.

The traffic intersection around Atlantis Radio is another spot where they operate.

Their number in Accra and Kumasi is growing exponentially, a worrying situation which calls for an immediate intervention by the city authorities.

Coming from Boko Haram infested parts of the sub-region, they pose a danger to national security.

The ease with which they come into the country at will defines the porosity of our borders; in fact beyond what we even imagine.

The ease with which they breach our borders is adequate pointer to the insurgents about how easy it is to come here and pitch camp.

The kid beggars create an unsightly scene for Accra’s landscape, but we are helpless as a people in addressing the situation.

Many have called for the expulsion of the beggar-invaders. It is no easy feat because they originate from an ECOWAS country and so an outright expulsion could land us in an avoidable diplomat spat with our neighbours.

Ghana holds a critical position in this comity of West African countries. We have had enough flak from Nigeria already about the Circle traders.

Our President is an important figure in the economic community and would definitely not support a brash action.

The foregone have accounted for officialdom’s inability to deal with the subject the way some persons would have preferred.

When we promote a national conversation around the subject, perhaps we can arrive at a consensus about what to do with the alien beggars, their presence here not something majority of Ghanaians are amused with.

The diplomatic constraints notwithstanding, the assemblies in which the beggars are active can devise a means of minimising their presence in the streets.

A few years ago, they were rounded up and taken to a holding area, but they fled the location, rendering the efforts useless.

In Lagos State in Nigeria, street-begging has been dealt an effective blow.

Until we arrive at a solution, the number of beggars from Niger will continue to grow as would the inconveniences.