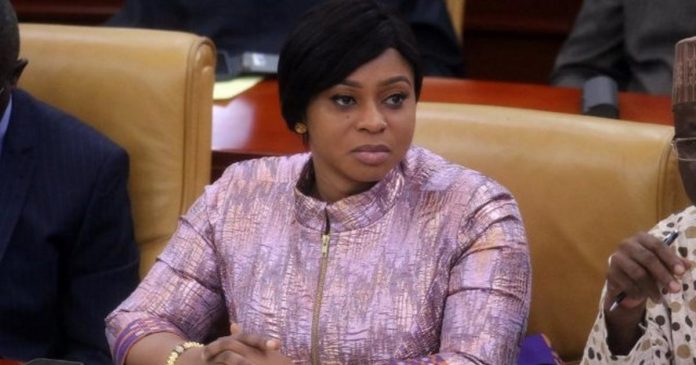 Adwoa Safo was the Deputy Majority Leader until the threshold of the 8th Parliament of the Fourth Republic when a shakeup in the leadership front of the New Patriotic Party (NPP) side of the House saw the position given to Alexander Afenyo-Markin.

Afenyo-Markin, as Deputy Leader, has lived up to the task since accepting the position therefore it is curious the exact factors for which the position is being reversed to Adwoa Safo.

She has pretty face, mostly well-polished.

Talks suggest that the reversal would be made public in a matter of weeks if not days, once dust settles on the ‘E-Levy’ debates.

It is also not certain whether Afenyo-Markin would be asked to take over Adwoa Safo’s Ministerial position at the Gender and Social Protection Ministry or another ministry, or perhaps, just to remain as the MP he has been over the years without occupying any slot in the Executive.

Our sources however explained that the advocates for pretty Adwoa Safo’s return have raised arguments of gender balance and women empowerment, even if it means a weakened front on the Majority caucus in this evenly hung parliament with a Speaker from the Minority and opposition party for that matter.

Adwoa, even as Minister, was absent from her post for a very long time until there were public calls for her resignation if she was not available to work.

Just when the public calls for her resignation were reaching boiling point, there was a communication from the Presidency that she was on leave for personal reasons and that the leave period had been extended till further notice.

Director of Communications at the Presidency, Mr. Eugene Armin, noted in an official statement that Ms Safo’s leave was to have ended August 31, 2021 but was extended till further notice.

“In her absence and until further notice, President Akufo-Addo has directed the Minister for Sanitation, Cecilia Abena Dapaah to act as caretaker Minister for Gender, Children and Social Protection,” the statement added.

While on leave, Ms Adwoa Safo has been sharing some videos of her on Tiktok.

Adwoa entered this 8th Parliament of the Fourth Republic to retain the Dome Kwabenya seat for the NDC with some 75,041 votes representing 58.35 percent to win against her opponent; the National Democratic Congress’ (NDC) parliamentary candidate, Ms Faustina Elikplim Akurugu who polled 52,262 votes which represented 40.64 percent.

She is a lawyer by training and was first was first elected as the Member of Parliament for Dome Kwabenya in 2012. She was re-elected in 2016 and 2020.

Alexander Afenyo-Markin, a lawyer by training, also retained the Effutu Constituency seat with 33,545 representing 64. 08 percent as against the NDC’s candidate, James Kofi Annan, who had 18,802 votes representing 35.92 percent.

Afenyo-Markin is a third term MP in a relatively safe seat.