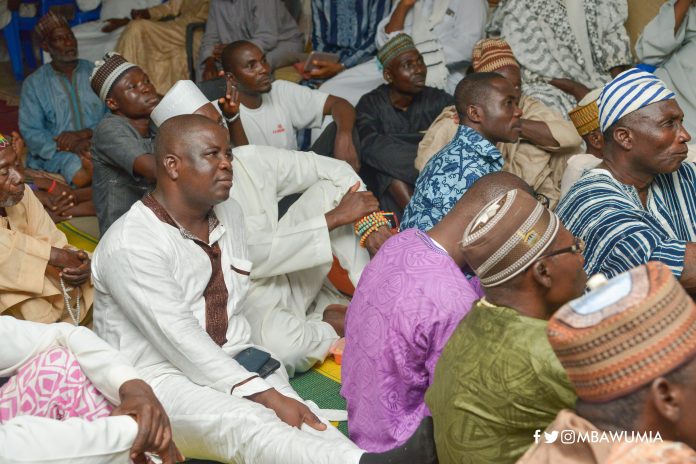 Residents of three major Zongo communities in the Eastern Region have expressed their appreciation to the government of President Nana Addo Dankwa Akufo-Addo for the many policies introduced to improve the lives of Ghanaians, especially members of the Zongo community.

Speaking both inside and outside mosques on Sunday 20th May, 2018, elated Zongo dwellers reiterated the enormous relief these policies and programmes, especially the Free Senior High School programme and the very significant reduction in electricity tariffs, have had on their daily lives.

Vice President Alhaji Dr Mahamudu Bawumia, who was in the region as part of a nationwide Ramadan tour, received rousing cheers when he visited the Somanya central, Dagomba mosque in Koforidua and the central mosque in Asamankese to pray with his Muslim brethren in this holiest of months.

Speaking at the Somanya mosque, Husseini Amidu, the Zongo chief of Somanya, commended the Akufo-Addo government for its commitment to ensuring equitable distribution of the national cake through the establishment of the Zongo Development Fund, and called for a quick implementation of the fund’s programmes.

“We are also happy with government’s plans to hire many more Arabic tutors to help our children acquire both Arabic and conventional education” he added, and called for special prayers for both the President and his Vice for wisdom and strength.

Other speakers at the Dagomba mosque in Koforidua expressed gratitude for the almost 18% reduction in electricity tariffs for households, saying “now we hardly pay light bill. Thank you Nana-Bawumia government!”

Speaker after speaker at the Asamankese mosque hailed government’s decision not to increase Hajj fares this year despite an increase announced by the Saudi authorities, indicating that it was a further sign of the government’s commitment to the spiritual wellbeing of Muslims in the country.

Explaining the rationale behind some of the policies being implemented by the Nana Akufo-Addo government, Vice President Bawumia reiterated that the President is a man of his word, and the entire government was working to fulfil the pledges made to Ghanaians in the run up to the 2016 elections to implement policies and programmes tailored to make life better for the ordinary Ghanaian.

“We promised to pay closer attention to the developmental needs of the Zongos, and for the first time in the history of Ghana, President Nana Akufo-Addo has not only appointed a Minister for Inner City and Zongo Development Affairs, but has set up a Zongo Development Fund and set aside budgetary allocation of Ghs100 million for it. Just last week we appointed a CEO and two Deputies to run the Zongo Development Fund. This is evidence that when we make a promise we keep it,” Alhaji Dr Bawumia emphasised.

With the audience responding with “You have done it!” Vice President Bawumia enumerated a number of fulfilled promises such as the restoration of Teacher and Nursing Trainee allowances, employment creation measures such as the Nation Builders Corps and the Planting for Food and Jobs Programme, and the relative stability of the cedi against other currencies.

“This government is just 16 months in office, but we are delivering systematically on the promises we made to Ghanaians and Insha Allah, we shall continue to deliver” the Vice President pledged.

Alhaji Dr Bawumia is expected to continue his nationwide Ramadan tour this weekend.