Why is our tourism potential lying fallow? 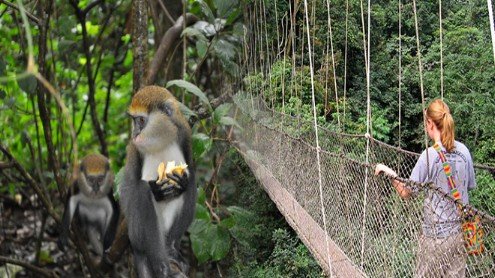 One of the less addressed topics in the Ghanaian socio-economic settings is tourism.

This has been so due to the lack of appreciation of the many blessings the industry offers us as a nation, and in such a situation the nation has no choice than to lose huge amounts of revenue that could have poured into the national coffers through developing, promoting and marketing the tourism industry.

So why is the story like this; why has Ghana not taken advantage of this huge potential like the Egyptians and Kenyans have done?

Perhaps the statement of the Tema Regional Manager of Ghana Tourism Authority (GTA) sums up the extent of the problem. In an interaction with the Ghana News Agency (GNA), he made it clear that, “Ghana has been slow in accepting the fact that there is money in the business,” and this calls for a lot of attention.

Mr. Gamali Dzordzorme believes that we have not maximized this potential because “of our national level of understanding that tourism, when invested in, brings local revenue and foreign exchange.”

As such, this lack of understanding of the huge potential has rather given rise to situations that denigrates the industry and prevented the nation from accessing needed revenue for development.

It also creates avenues for certain individuals to exploit the industry to their own benefit as it creates opportunity for criminal activities to go on.

Some of these things came to light when the Tema Regional office of the GTA embarked on a regulatory exercise to close down some hotels and restaurants which were clearly not complying with the national tourism laws.

It was obvious that people were doing their own things with recklessness impunity, and so in the case of Basilissa Family Restaurant at Community 25, the Manager of the facility burnt out his fury on officers of GTA who were doing their lawful duty.

He did not understand why they should close his facility down when indeed he could not produce a license from the GTA to show his right to do business. But as Mr. Gamali Dzordzorme puts it, “No one can come here and feign ignorance before me. They know exactly what to do but they don’t do it.”

This again shows the extent to which even operators of the industry do not understand the benefits they stand to gain if they adhere to standards in their operations. This in no doubt creates a picture of owners of restaurants, hotels and hostels not positioning themselves well should there be a boom in the tourism industry.

To further buttress the pretentious ignorance of some operators of the industry, the GTA officials encountered some scene creation at the Jayuro Freedom Road Restaurant & Bar at Community Three, where a Korean Entrepreneur had failed to register her restaurant with the GTA but had been operating for years. And to make things worse, her workers, who pleaded anonymity, were happy for the closure of the facility.

They told of the meager salaries she paid them and her refusal to pay their Social Security and National Insurance Trust (SSNIT) contributions. It was obvious that even foreigners were taking advantage of our inability to prioritize the tourism sector to make it provide the needed resources for our development.

Worse of it all is its potential to promote crime if not well monitored. Visiting some facilities like Mac Hotel, Kasbet Hotel, Moko Sane Guest House, etc. in Tema Newtown, the team chanced upon some horrible spectacles.

Supposed hotels were in such deplorable states that one wondered why people patronized them. But it was understandable why they did. Such places had become dens for sexual exploits. Operating against the law, those dirty rooms were used by men who brought their partners there during productive hours of the day to have sex, and when casual or forbidden sex is involved, one should understand that it would lead to other crimes like drug peddling and robbery.

The GNA witnessed a funny scene at Passions Club and Restaurant, Community Ten, when some customers took the sides of the operators of the facility and queried officials of GTA for closing down the facility. It was obvious they did not know nor appreciate the dangers in the hospitality industry if things were not handled well. The fact is, if the person cooking for one to eat is not licensed to do so, what guarantee do one have to ensure that he or she was consuming a wholesome meal. And as Mr. Dzordzorme would put it, “when anything goes wrong it is the Ghana Tourism Authority they would attack.”

But all these are made possible because Ghana has not given itself the opportunity to develop this magnificent industry, and so operators of the industry have taken undue advantage to mess the system.

And so who do we blame? Mr. Dzordzorme attested to the small nature of the Ghanaian national cake such that it was not possible to invest heavily in the sector. And as he indicated, in the face of such scarcity, what governments have done over the years was to invest in industries whose products were tangible.

He said, “Let me attempt to explain the way I see these things. There are competing needs for competing things in different areas. The size of cake that Ghana has is small. Because tourism is an intangible product and an experience but not a physical product, we tend to invest more in other sectors of the economy other than tourism.”

But it is ironic why we do not see tourism as a viable venture to invest in. This is because, unlike other industries like mining “tourism resource is renewable and can be enhanced by adding value to it,” the Regional Manager said.

Mr. Dzordzorme downplayed people’s perception about the industry that it only gave pleasure by saying that, “Check out the volumes of fuel the operators use, the number of people they employ in the hotels, restaurants, events centres and hostels, etc.”

According to World Travel and Tourism Council (WTTC) 2017 Annual Research, direct contribution of tourism to Egypt’s economy was 19.4 billion United States Dollars (USD) which was 7.2% of total Gross Domestic Product (GDP) in 2016. In the same year, it contributed 1,763,000 jobs which amounted to 6.6% of total employment. Visitor exports generated USD 3bn USD which was 11.4% of total exports in 2016, and the investment in the industry in 2016 was 4.6 b USD.

But the story is different in Ghana and this calls for a lot of attention. Statistic are not even accessible. As a nation, it is about time that we took the industry serious and give the GTA all the necessary budgetary and logistical support to break undue dependence on cocoa and oil which are fast depleting and concentrate our energies on tourism which cannot be exhausted.

It is time policy makers saw the industry as viable and the general public appreciated the need to invest and patronise the sector as a way of lifting Ghana from the situation of having to depend on foreign assistance in our quest to survive as a nation.