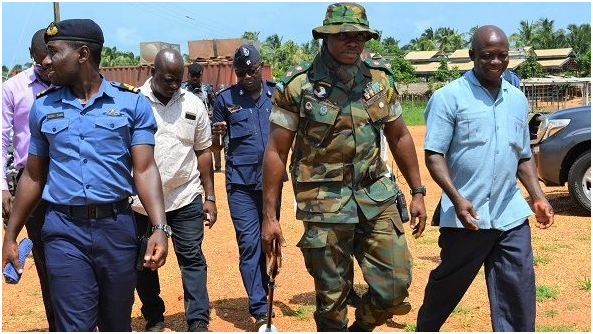 It seems an apology rendered by some private companies busted for constructing illegal mini ports in the country would not save them as the Ghana Ports and Harbour Authority (GPHA) is bent on prosecuting them.

They included LIB Limited, which is putting up a facility at Tema and expected to receive Liquefied Petroleum Gas (LPG) imports.

Also, a fishing company, Omanye Oceans Fisheries Limited, is alleged to be constructing a boat yard along the shores of the Volta River at Anyanui in the Volta Region, while cement manufacturer, Diamond Cement Limited, is also reported to be developing a jetty at Keta in the same region, to receive clinker imports for the production of cement at its factory in Aflao.

The acting Director-General of the GPHA, Paul Ansah Asare who prevented the companies from continuing with the projects explained that the act breaches the PNDC Law 160 of 1986, which makes the GPHA the sole state entity authorized to plan, build, develop, manage, operate and control port facilities in Ghana.

He subsequently invited heads of the indicted firms for a meeting in Accra, after which the companies apologised for their acts.

But speaking on the Citi Breakfast Show last week, Mr. Asare who described the acts as a criminal offence said “when you realize that you have done wrong, the first to do is to apologize so I was not surprised when they began to apologize but that does not mean that the law will not take its course.” He added that GPHA is in the process of ensuring that the law takes its course.

“You would agree with me that we have to consult, we need to do consultations as to what offense they have committed,” Mr Asare added.

The GPHA boss further disclosed to Bernard Avle, host of the Citi Breakfast Show, that the said companies had applied to the GPHA for a permit to undertake such project in 2016 but the permits were not given.

He added that when they picked up information that the companies were constructing the projects without permits, the GPHA wrote a letter ordering them to stop work but the directive was ignored by the companies.

“When I came to office, my intelligence picked up this development so I sent a team comprising port security, national security, police, marine police and the navy to go and ascertain what was happening there and lo and behold, we discovered that 650 meters long brick water had been developed and it was ongoing. So immediately we took steps to stop them.”

“And in subsequent investigations, I realised that these people wrote to us [GPHA] somewhere in August [2016], looking for permit to develop. That had not been concluded yet but in line with the culture of impunity, they decided to proceed.

So we are yet to find out where they drill that impunity from. When these things are happening, you can be sure that there are more powerful people behind them,” he lamented.