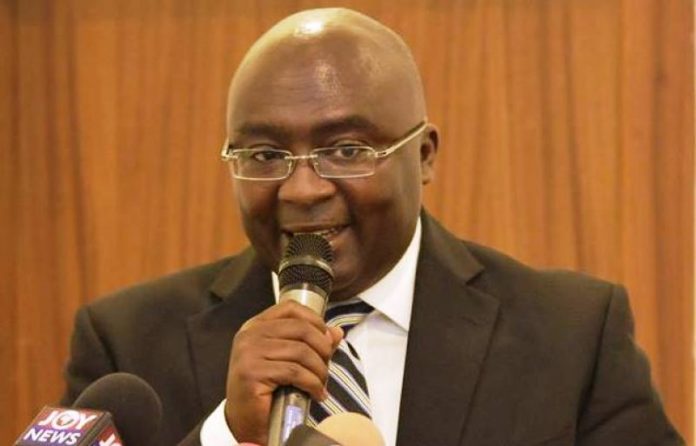 The Vice President, Dr. Mahamudu Bawumia, is now the subject of discussion within the corridors of power, as he has been rendered redundant in the scheme of affairs.

Dr. Bawumia, who was touted by the New Patriotic Party (NPP) as an economic wizard with the magic wand to solve all economic problems, is now more than ‘errands boy’ as he undertakes activities that are not even up to the standard of a deputy minister in any serious government.

The Economic Management Team (EMT) that he heads is now for the ‘Kitchen Cabinet’ of President Nana Addo Dankwa Akufo-Addo and Dr. Bawumia now plays little or no role within the EMT as he is often times ignored on relevant discourses on the economy.

After making too much noise about the cedi against the United States of America dollar, Dr. Bawumia was expected to roll out his magic to stop the current freefall of the Ghanaian cedi against major trading currencies, especially the dollar.

Shamefully, the Vice President has been made to stop talking about the dollar because he is widely seen as an albatross on the neck of the government after claiming that the government had arrested the dollar and handed over the keys to the custody where it was being kept to the Inspector General of Police (IGP).

For now, issues relating to the weak Ghanaian Cedi are handled by the Finance Minister, Mr. Ken Ofori-Atta, instead of the Bank of Ghana that is charged with the responsibility of seeing to the strength and stabilization of the Ghanaian currency.

President Akufo-Addo himself has gone further to snatch the job of his Vice on certain platforms by talking about steps that were being taken to salvage the ailing Ghanaian Cedi.

From the corridors of power, The Inquisitor has gathered that the President was more comfortable discussing economic issues, especially those on the Cedi, with other top-notch economists within his party and government.

Sources say that Dr. Bawumia had been sidelined on numerous occasions when meetings were held to take crucial decisions on the economy.

And again, the formation of numerous committees to work on various aspects of the economy was a kind of vote-of-no- confidence in the Vice President.

Per the 1992 Constitutional Provisions, the Vice President has limited powers and could sometimes only act based on assignments he is asked to perform by the President.

Dr. Bawumia is now globetrotting soliciting funds for some development projects. Before press time yesterday, he was in India negotiating for some cash to improve agriculture mechanization and for the Yendi Water System Development project.

Amazingly, it was Dr. Bawumia, who then in opposition, spoke vehemently against external borrowing for development projects in the country.

Meanwhile, a renowned economist, Kwame Pianim, has asked Finance Minister Ken Ofori Atta not to focus on how to stabilize the Cedi, which is struggling against the dollar, because that is not his responsibility.

According to him, that is the sole responsibility of the Governor of the Bank of Ghana, Dr. Ernest Addison, and he should be allowed to discharge that duty.

Meanwhile, Finance Minister Ken Ofori-Atta has assured that the cedi will stabilise in the next few weeks.

Speaking to journalists outside Parliament House Wednesday, March 13, 2019, Mr. Ofori-Atta said government is expecting large inflows of foreign exchange which will help turn around the value of the cedi, which has hit a record low of 5.6 to a dollar.

“Really, I am very confident that a reversal is going to occur and that it [cedi] is going to be pretty stable going forward. We have about 200 million dollars coming in from Cocobod and another 600 million from Cocobod in a month or so…and that should close within the next weeks or so…with the type of capital that we expect in the few weeks we really expect a reversal and a stability,” the Finance Minister said.

In an interview on Kasapa News, the seasoned economist, Kwame Pianim, urged the Finance Minister to rather focus on transforming the Ghanaian economy, saying that “we can’t continue to do the same thing over and over again expecting different results.”

“Tell my nephew Ken Ofori Atta that I say he should concentrate on working hard to build the economy and provide jobs for the teeming masses, and let investors invest their monies here in Ghana to stabilize our currency. His job is not to see to the cedi being stabilized, that is the work of the Governor of the Bank of Ghana who has been appointed by the President.”

He added: “It is not the pumping of monies into the system that will stabilize the economy as the Finance Minister is claiming. Ex-President Mahama also pumped monies into the system but that could not stabilize the cedi when it struggled against the dollar. What Ken Ofori-Atta should do is to rather help to transform the economy. As a country, we can’t continue to do things the same way as we did several decades ago. We should all join in propagating to the whole world that Ghana is a peaceful country and that investors will have their monies worth if they invest here. We have young people who are technology entrepreneurs – these are the kind of people we should be supporting as a state. We can’t expect to be doing the same thing over the years and expect different outcomes.”